Our portfolios have emerged well from an extremely turbulent start to the year in SA.

The FTSE/JSE All Share Index’s return of 3.8% for the first quarter (2.5% for the rolling 12-month period) belies the sharp sell-off in locally focused assets following the shock cabinet reshuffle at the end of March. Domestic investors have also seen a currency shock and a surge in government bond yields in recent weeks in reaction to the political uncertainty.

We do expect the domestic situation to deteriorate further, so we are inclined to favour businesses operating outside of SA, and will require a greater margin of safety for buying purely domestic businesses. We do not believe that the decline in pure domestic stocks compensates investors for the deterioration in the macroeconomic environment and enhanced risk.

In aggregate, we think our portfolios are well positioned with an overweight position in rand hedge equities and limited exposure to domestic government bonds.

Both our specialist equity strategies have delivered a strong performance in a volatile environment. Rand hedge holdings, which we believe offer compelling stock-specific fundamentals, remain the cornerstone of these strategies.

Our rand hedge industrial holdings, such as Naspers, British American Tobacco and Mondi (which in particular continues to deliver a steady earnings growth profile and good cash generation), have had a solid start to the year, notwithstanding the rand strength. Despite the political events, the rand ended the quarter 2.1% stronger (up 9.3% over the rolling 12 months). Although the rand has weakened since quarter-end, we believe it is still pricing in a relatively optimistic political and economic outcome and believe that the risks are skewed to the downside.

The strategies have increased their exposure to MTN during the quarter. The share has halved from its peak a few years ago and sentiment is currently very negative. Although the risks inherent in regions like Nigeria and Iran are high, we believe that the potential upside in the stock justifies our current weighting.

Prices in the resource sector spiked towards quarter-end due to the earnings protection they offer as a result of the weaker rand. Stock picks that performed well include Northam Platinum (up 27%), Exxaro (up 32%) and Glencore (up 13%). Although we have taken profits in some of our resource holdings, we retain a healthy weighting in the sector. The platinum sector remains an interesting one. Although the equities have recovered strongly off their lows, they remain depressed. A stock like Impala trades 87% off its peak at the top of the commodity market in 2008. It trades at a 50% discount to its book value and only breaks even at current platinum group metals (PGM) prices. PGM markets are in deficit and mine supply is likely to continue to reflect the mining companies’ underinvestment over the last 10 years. The industry cannot survive at current prices. We think there is significant optionality, should prices increase to a level sufficient to keep platinum miners in business. Northam is our key pick in the sector. It is a lowcost producer with less labour-intensive operations than its peers. A strong balance sheet and significant optionality in its ore bodies support its ability to grow relatively quickly, should the cycle turn.

Financials underperformed for the quarter as the market priced in the ramifications of rising capital costs and a more challenged domestic economy. Reliance on external funding and heavily geared balance sheets make banks extremely vulnerable to shocks of this nature. We have not yet considered taking advantage of the lower prices in the sector as we believe the risks are skewed to the downside, given the market’s very benign reaction to recent developments.

In steep contrast to the beginning of 2016, we came into this year cautiously optimistic about SA. Domestic-focused counters certainly looked to have a brighter outlook and stood to benefit from falling inflation and the end of rising interest rates. While these macro variables remain largely unchanged, the recent political developments have given us reason to pause and rethink this outlook. The political change in direction has once again put us in an environment of deep uncertainty.

Our disciplined and long-term investment philosophy, and the advantage it typically provides in volatile periods, remains our anchor in these uncertain times.

Our balanced strategies, Global Houseview and Managed, continued to outperform over meaningful periods.

Despite great uncertainty locally and globally, these strategies have a high allocation to risk assets (equity and listed property). This is because we believe the biggest risk lies in inflation eroding real capital values over time. In our view, equity and property still offer the best risk/return payoff profile.

Our global equity position, which had a higher allocation to other emerging markets, has delivered a strong outperformance. Emerging markets sustained their rally into the new year, after a strong 2016. Our overall allocation to offshore assets is sitting close to its maximum, as we are very concerned about the risks that recent political change present to all stakeholders in the SA economy.

In our domestic exposure, our allocation to resource shares has contributed to performance. Our underweight position in companies that are sensitive to domestic interest rates and the local economy has also been beneficial, as these companies have been hit hard following the recent replacement of the finance minister.

Our property allocation includes domestic SA property holdings, UK property stocks listed on the JSE and some high-quality domestic counters. We consider UK-listed property an exciting opportunity for the patient investor. Our largest holding is Intu, a portfolio of high-quality shopping centres. We expect the local property sector to show mid-single-digit growth in distributions over the medium term. Reasonable distribution growth, combined with an attractive initial yield (typically in the 8% to 10% region), should result in an attractive holding period return.

We have been very underweight sovereign debt for some time, and have maintained this position. Global bond markets remain very expensive due to central bank buying strategies, and the local market does not fully price the risk of greater budget deficits as economic growth weakens and potential political demands on the Treasury increase.

The world remains as uncertain as ever. With the elections in France, a volatile US government and rising US interest rates, we remain alert to the opportunities that volatility may present to the long-term investor. 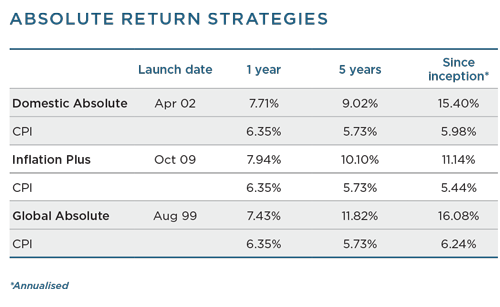 Despite the volatility towards the end of the quarter, the strategies performed well during this period and over the past year.

Given the well-diversified multi-asset nature of the strategies, we construct the portfolios to withstand unforeseen events. In the case of SA, the rand invariably acts as the biggest shock absorber and owning a high proportion of domestically listed companies that derive the bulk of their earnings from outside the country has again proven to be a prudent approach.

Global stock markets were generally strong, driven by expectations of positive policy changes by the Trump administration (such as lowering corporate taxes). However, the markets have in our view ignored the risks of tensions in the global economy as president Trump advocates protectionism through his ‘America First’ approach. We consequently decided to reduce our exposure to global risk assets somewhat by lightening both our developed and emerging market equity holdings.

The volatility in the bond market once again gave us the opportunity to trade domestic government bonds profitably. We ended up being net sellers during the quarter, with our average sell level being 8.35%, while our average buy level was 8.75%. We continue to prefer equities and property, which represent the larger part of the portfolios.

We have navigated uncertain periods before by steadfastly focusing on the tenets of our long-term, valuation-driven investment philosophy and, once again, we have seen it pay off in the most recent performance of our portfolios.

All our positions are based on sound long-term investment fundamentals and supported by robust valuations. During times of unsettling political developments, this considered approach should provide some comfort.