“If you want the rainbow, you gotta put up with the rain.” - Dolly Parton, businesswoman, singer-songwriter and philanthropist

COVID-19 HAS FADED into a vivid dream and, while new variants are emerging, its effect on everyday life is greatly diminished. The world now faces a new, covert predicament – the effect of soaring inflationary pressures on the cost of living.  A perfect storm of the liberal application of fiscal stimulus to keep consumers afloat during the pandemic, supply chain bottlenecks and sanctions on Russian exports have combined to create the largest, synchronised uptick in global inflation in over 50 years. Global central banks were initially dismissive of the sustainability of the inflation uptick, but the last few months has seen an appreciable increase in anxiety, which has led to considerable action to limit the fallout. This more aggressive action has resulted in many central banks looking to hike interest rates to levels that are well above neutral in a very short time period to slow overheating economies. Markets have reacted by pricing a recession as the only viable means of arresting inflation, which has injected significant volatility across all asset markets.

During the first quarter of this year, South African (SA) markets stood out for their resilience among the global  turmoil, but succumbed to the pressure from global markets in the second quarter. Inflation-linked bonds (ILBs) were the only safe place within local fixed income markets as they registered a return of 2.95% for the quarter, bringing their year-to-date and one-year returns to 3.26% and 10.7%, respectively. They were buoyed by an increase in inflation expectations following an upside surprise in May’s inflation number and an upcoming period where inflation will remain above implied breakeven inflation levels. Nominal bonds followed global bond trends with yields kicking up almost 100 basis points (bps) since the previous quarter as risk sentiment soured. Despite losing almost 2% so far in 2022, the performance of SA bonds remains significantly better than that of global markets, which are down almost 15% in dollars this year (as measured by the FTSE World Government Bond Index (WGBI)).

SA headline inflation surprised significantly to the upside in May, and remained well above the top end of the target band in June.  Food was the most significant upside surprise, suggesting that second round effects might prove worrisome. Our expectations are for CPI to continue its upward trajectory, breaching 8% and staying above the top end of the inflation band (6%) for at least the next 12 months. We now expect the South African Reserve Bank (SARB) to continue hiking rates in 50bps increments for the next two meetings before reverting to 25bps, taking the repo rate to 6.75% (previous 6.5%).  Our expectations are for CPI to average 5.3% in 2023 and 4.5% in 2024; however, the risks remain to the upside. Current market pricing already encapsulates a significant inflation premium, suggesting a repo rate of between 7.5% to 8% by end-2023. This would imply a real repo rate, based on current inflation expectations, of 3% higher than SARB’s own 2.1% and our expectation of real repo at 1.5% to 2% (Figure 1). 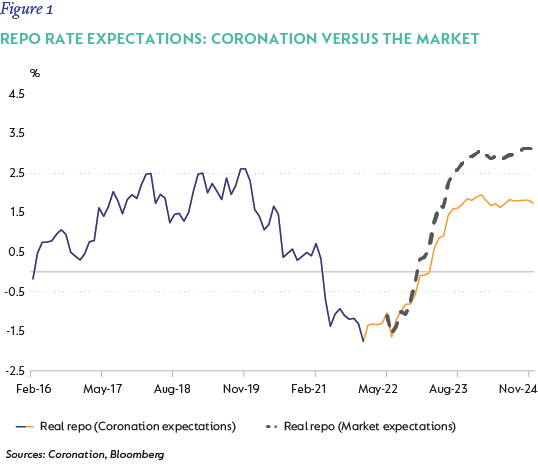 WE NEED GROWTH; AND WE NEED IT NOW

Fiscally, SA is on a much better footing. However, many of the tailwinds that were providing support are expected to fade and the recent intensification of the energy crisis highlights the need for further support for ailing State-owned enterprises (SOEs). The three main risks for the fiscus are a higher-than-budgeted wage bill, an extension of the social relief of distress grant into a permanent basic income grant, and further support being needed by SOEs, specifically Eskom. It is our expectation that much of the tax overrun for this year will be diverted to these three areas as opposed to reducing the borrowing requirement. While this can be easily digested over the current fiscal year, going forward, the only way these can be less onerous is if SA grows by about  2.5% to 3% per annum.

The main impediments to growth are well known, with energy supply being top of the list. Operation Vulindlela has been fast-tracking projects, so that investment is targeted into the key growth areas. This should help the growth profile over the next two to three years, but the elephant in the room remains the energy sector and steps taken to liberalise entry into that sector. The October Medium-Term Budget Policy Statement is expected to pave the way to this through a debt plan for Eskom, which should help eliminate the largest risk for the fiscus and help accelerate the path to separation. However, until there is more clarity on this plan and its impact, SA will remain a sub-2% growth economy. On the funding side, National Treasury ( Treasury) finally came to market with a floating rate note to reduce their current cost of funding. However, at this point, the instrument is not being used as a substitute for fixed rate funding and, thus, there has been no reduction in fixed rate issuance. In the next few quarters,  Treasury should use the opportunity for lower funding costs and demand for floating rate instruments to reduce their reliance on fixed rate funding and release some of the issuance premium (which forms part of the fiscal premium) currently encapsulated in SA government bonds (SAGBs). This, once again, points to things moving in the right direction, but at a very glacial pace. 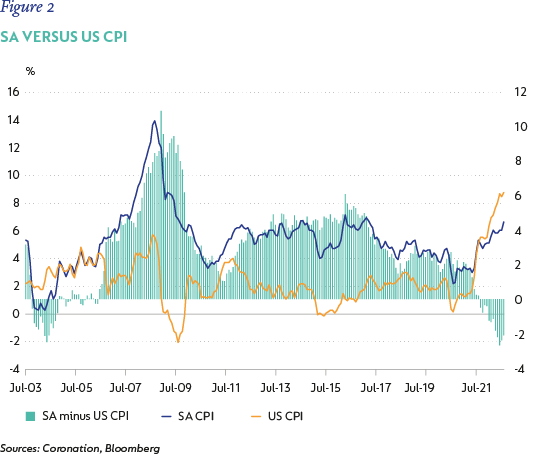 Longer-term real rates have proven to be a strong driver of emerging market bond yields and risk sentiment over time. The recent repricing has been more violent and larger than in the taper tantrum of 2013, putting levels well above the post-Global Financial Crisis (GFC) average of 0.15%. The current level of 0.75% is much higher than that but still lower than the pre-GFC average of 2%. However, real GDP growth in the 2003 to 2007 period averaged 3%, compared to the post-GFC average of 2%. In addition, the debt load that the US carries now is significantly higher, with current interest payments consuming 9% of revenue, which would increase to well above 20% if the US funding rates (bond yields) move to 4.5%. This  would be unsustainable. As such, we expect US inflation to settle in the 2.5% to 3% range, and hence US real rates to stay contained in the current range of 0.5% to 1%. This implies a fair value for the US 10-year rate of around 3% to 4%.

Risk sentiment has deteriorated considerably as can been seen in the performance of the BB Index (Figure 4), of which SA is a component. Spreads have only been wider during the GFC and the Covid-19 crisis. The implication of this is that the market has already priced in a decent expectation of a recession, as credit quality/worthiness generally deteriorates during such periods. If the recession does not materialise or proves to be short lived, then it is likely that these spreads will return very quickly to their longer-term average of around 350bps to 400bps, or even lower, depending on the growth dynamics. In large part, the most recent sell-off of SAGBs can be seen as a reflection of the deterioration in recent risk sentiment. 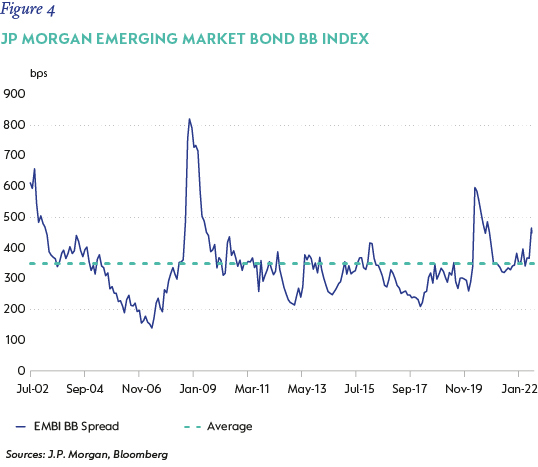 The fair value for the SA 10-year bond is made up of expectations for the global risk-free rate (US 10-year bonds), SA’s inflation differential to the US and a measure of credit worthiness of the SA sovereign. In the previous paragraphs, we determined a fair value for the US 10-year bond to be  3% to 4%, the inflation differential between SA and the US between  2% to 3% and SA’s credit spread should be in the 3.5% to 4% range. Bringing this together, puts the fair value of the 10-year SAGB at between 9% to 9.5%, which is still well below current market pricing of 11%, still suggesting considerable longer-term value in the SA 10-year bond.

ILBs have had a great run over the last two quarters. Despite good outperformance, we still find value in the shorter-dated ILBs, given their real yields are more than 2% and the implied break-even inflation for these instruments still sits at 5% versus our expectations for inflation of above 6% for the next year. This implies a minimum expected total return of 8.6% (2.6% + 6%) for an instrument with a maturity in 2025, which is 2% above expected cash rates and close to what can only be achieved by investing in a nominal bond of longer maturity (2026). We still believe that longer-dated ILBs, given their higher modified duration and significantly higher implied breakeven inflation, do not offer as much value as their equivalent nominal bonds and we would thus avoid these for a bond fund. Central banks globally have started down a path of rapid monetary policy normalisation in the wake of much higher and persistent inflation. In many cases, policy rates are expected to move into restrictive territory, which carries the risk of sending the global economy into recession. There has been a profound impact on global risk sentiment and expectations are for emerging market central banks to adopt a similar stance. In SA, the market has priced a much more aggressive monetary policy normalisation cycle, despite a more gradual rise in local inflation. Bond yields have widened in line with the deterioration in global risk sentiment and repricing in global bond yields, but still encapsulate a significant risk premium.  We continue to believe that bond yields in the 10-year area of the curve still offer significant value for bond portfolios, and allocations to ILBs should still be maintained but focused in the shorter end of the yield curve.