Marc Talpert is an analyst and portfolio manager with more than seven years of investment industry experience.

NEITHER NASPERS NOR Prosus are likely to be “household” names for our global reader audience. However, we would expect most have heard of the Chinese technology and media giant Tencent. Coronation’s strategies own exposure to Tencent via stakes in both Prosus and Naspers, and a detailed look at the investment case for this group of stocks is therefore warranted.

Tencent has been a phenomenal success story over the past decade. The growth in its valuation has been the main driver fueling the rise of Naspers, which is now the biggest company on the Johannesburg Stock Exchange (JSE). Naspers, an early investor in Tencent, has generated a cumulative total return of nine times over the past decade versus the JSE All Share Index’s return of 1.7 times over the same period. The success of Tencent has overshadowed many of the other successful technology investments that Naspers has made subsequently.

Prosus was listed in 2019 out of Naspers, holding all their non-SA domiciled technology investments. It has listings on both the JSE and the Euronext Amsterdam exchange, which brings it into play for a wider European and global investor base. The question for this group of stocks is whether the performance of the last decade can be repeated in the coming decade.

In our view, while Tencent is still very important for the investment case of Naspers and Prosus, the non-Tencent assets will be significant drivers of long-term value creation. This is a portfolio of assets that is now worth approximately $60 billion based on our assessment of value, which compares to the spot value of the Tencent shareholding of $170 billion.

One cannot talk about Tencent without mentioning the Chinese regulatory environment that has undoubtably become key when thinking about the outlook for Chinese technology busi­nesses. However, it’s important to consider regu­lation and its impact on the individual busi­nesses, as the long-term impact on a case-by-case basis will most likely be different. At a high level, Tencent has historically navigated regula­tions well, and has exercised admirable restraint in adhering not just to the letter, but also to the spirit of the law. Historically, it has left money on the table, which positions it relatively better than its peers, in our view. The business will not be immune to the changing regulatory envi­ronment, but it should be able to navigate this environment due to a diversified business, which should continue to evolve (Figure 1). 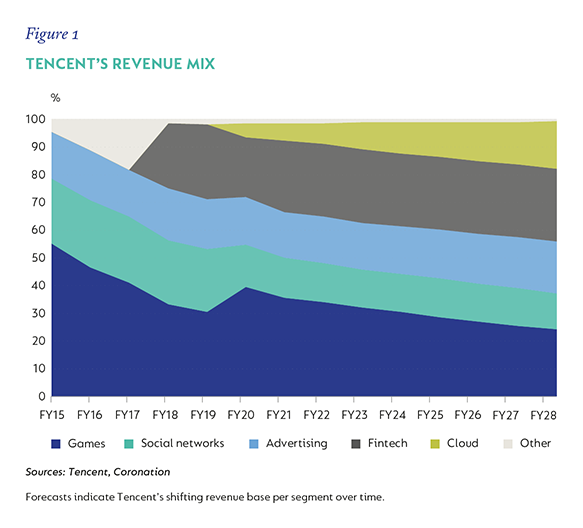 So, while the Chinese gaming business is exposed to regulatory tightening, most notably a clampdown on the game time and spend of minors, it should be noted that minors contribute less than 5% of gaming revenue.

Another important consideration when thinking about Tencent’s gaming business and its global expansion is the fact that China represents 25% of the global gaming market, and thus, by expanding globally, it has effectively tripled its addressable market in what is a structurally growing industry. 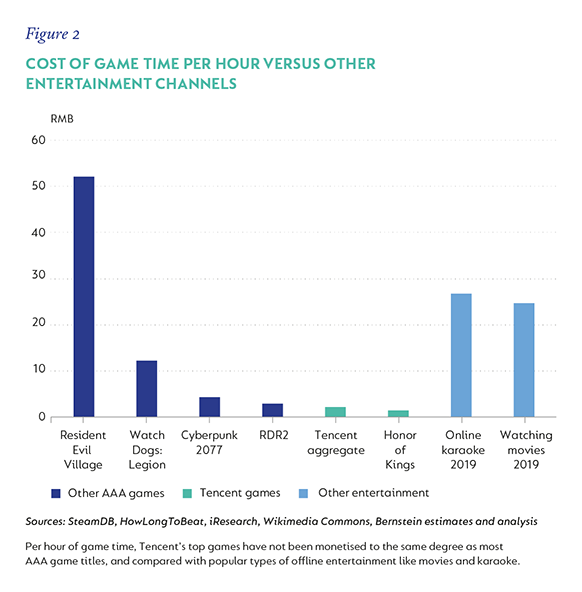 Tencent has always been restrained in monetising its share of online consumer time; this is reflected in the fact that Tencent apps have a 36% share of time spent online in China versus their 11% share of the advertising market. So, while we don’t expect the two to converge completely, the mini programme ecosystem* that exists within WeChat is driving a significant amount of commercial activity, creating a situation whereby advertising spend can be tracked and attributed to consumer spend.

This is supportive of improved advertising pricing due to the high (and directly measurable) return on investment being achieved by advertisers. There is already RMB1.6 trillion (and growing in triple digits) of gross merchandise value moving through this ecosystem, and we expect the level of commer­cial activity to continue to increase.

Tencent’s fintech business is currently dominated by payments, which, while not immune to regula­tory intervention, are less exposed than other areas like credit. Growth within the fintech segment has always been managed conservatively due to management’s acknowledgement of the regulated nature of financial services. Therefore, the changes required due to new regulations are marginal.

Less than 20% of Tencent’s payments volumes relate to consumption, as volumes are still dominated by peer-to-peer payments, which are not monetised. We expect the level of consumption volumes to grow faster than peer-to-peer volumes, which should drive robust revenue growth.

The other part of the fintech business that we feel has lots of potential is wealth management. This leverages the consumer payment relationship to then offer consumers seamless access to various saving and investment products.

The cloud business is still very nascent, but represents the number one investment priority of the group. This, when you consider that only c.8% of IT workloads in China have migrated to the cloud versus 25% to 30% in the West, provides a struc­tural growth opportunity for this segment for many years.

Finally, an underappreciated aspect of Tencent’s business is its astute investment ability that has resulted in an investment portfolio worth c.$220 billion, equating to roughly 38% of the company’s current market capitalisation. It remains an active investor across the globe and intends to deploy 60% to 70% of all free cash flow generated into invest­ments, which, based on its investment track record, should yield attractive returns.

THE REST OF NASPERS/PROSUS’ PORTFOLIO IS UNDERVALUED

While we think Tencent is an attractive standalone asset, we believe that the upside potential of the Naspers/Prosus ex-Tencent portfolio is underap­preciated (Figure 3). 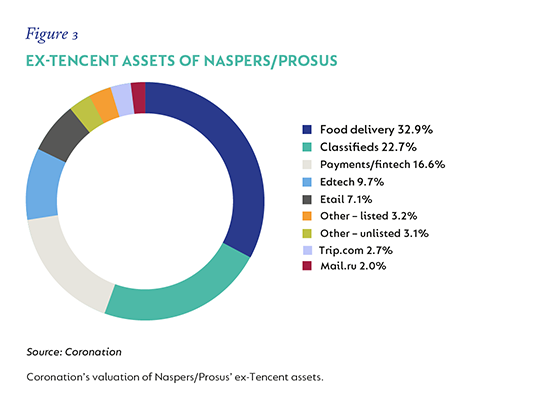 We believe the food delivery space is still early in its innings, with material long-term structural growth drivers, as indicated by Figure 4. 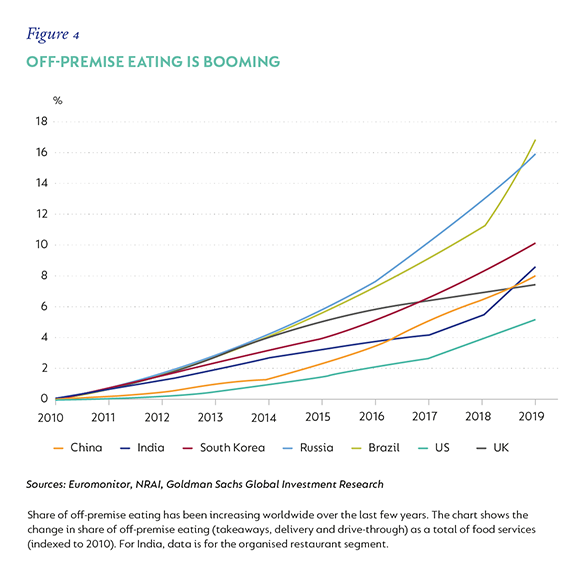 Prosus has a food delivery portfolio that is primarily made up of three assets – Delivery Hero (27% ownership), iFood (62% ownership) and Swiggy (36% ownership). Prosus has been investing in the segment since 2017, which was arguably well timed in hindsight, allowing the business to generate attractive internal rates of return (IRR) on these investments. Delivery Hero is the number one player in 90% of its markets, which span 52 countries. Swiggy operates in a duopoly with Zomato in India, a market which is still nascent but growing rapidly (Figure 5). iFood has an 80% market share in Brazil, creating an enviable competitive position. 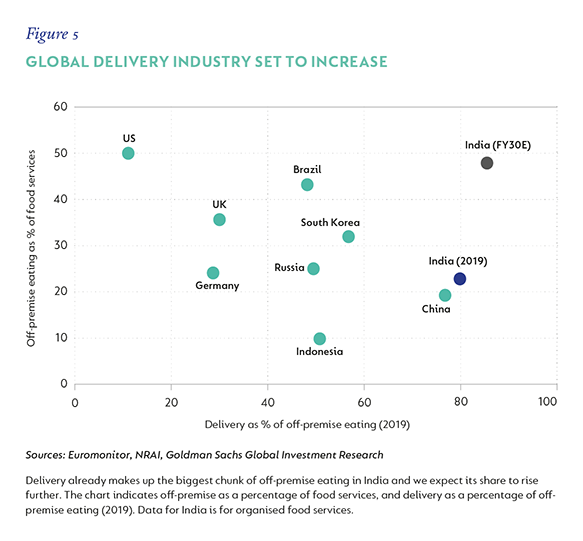 This is a segment that the group has been investing in for many years, with the biggest assets being Avito in Russia and OLX in Eastern Europe and Brazil. While primary exposure is to auto and real estate classifieds, the business is currently evolving to cater to user needs, and is transitioning from a search-only business to one that enables consumers to search and connect to a transactional platform. This is most notable within the auto segment, which is building out physical infrastructure that should allow Prosus to move deeper into the actual also transacting online (Figure 6), offering both services should result in enhanced convenience, higher conversion rates and a greater share of the transaction economics. 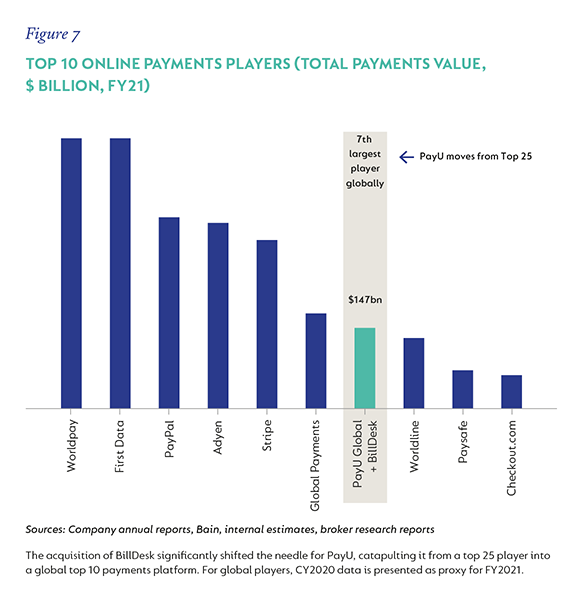 The business has extensive merchant relation­ships due to the fact that PayU provides core infrastructure that enables merchants to accept digital payments. Leveraging this relation­ship means that PayU can provide additional services, such as offering credit to both busi­nesses with which they have existing relation­ships and consumers at the checkout phase. The business should continue to benefit from the move away from cash, especially considering the biggest exposure is to India, which is still a cash-dominated economy (Figure 8). 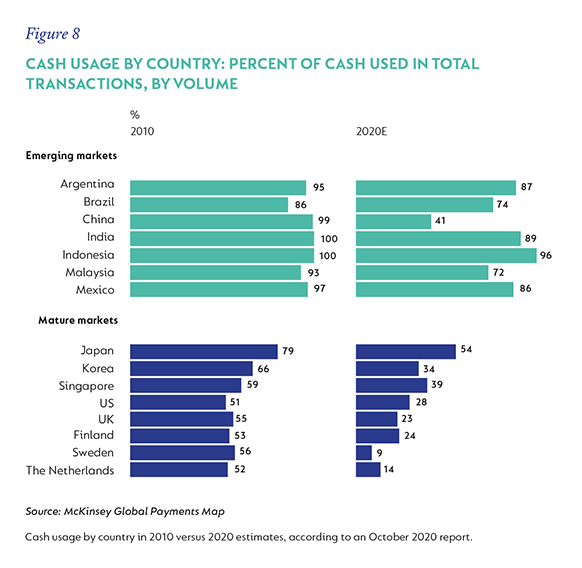 The final material pillar of Prosus’ investment portfolio relates to education technology. The bulk of its investments relate to enterprise education businesses (reaching 90% of Fortune 100 companies). These address the need for continuous adult education, which is becoming increasingly important as skill requirements constantly evolve in a fast-moving world.

Prosus’ most recent acquisition of Stack Overflow for $1.8 billion, which is integral to developer workflows, created a sticky relationship with over 100 million developers, 85% of whom visit the platform every week. Currently this is largely unmonetised, but there is the potential to leverage existing enterprise relationships to increase the monetisation touchpoints of this high-utility platform.

Prosus also has a notable 11% shareholding in BYJU, a rapidly growing online K12 education business serving more than 100 million students. While its roots are in India, it has subsequently expanded globally and has turned out to be an exceptional investment for Prosus, generating an IRR of an estimated 81%.

Then, when you consider that Tencent has an investment portfolio that accounts for 38% of its current market capitalisation, coupled with a diversified business spanning games, social networks, fintech and cloud, which are all at different levels of maturity, we feel that, notwithstanding the regu­latory headwinds facing Tencent’s business, the company is still well placed to deliver both double-digit revenue and profit growth over the next few years. Considering all of the above we believe that Prosus shares represent a rare combination of both valuation unlock and growth potential, which combine to offer an extremely attractive opportunity for investors.+

* A set of front-end applications and tools that enables comprehensive business operations/mini stores and full-blown marketing services.
Figures as at 12 October 2021.

Marc Talpert is an analyst and portfolio manager with more than seven years of investment industry experience.