THE END OF 2017 marks almost a decade since the global financial crisis. Over this period, financial markets have become accustomed to historically low policy rates, super-low long bond rates and a seemingly unending supply of ‘free money’ from central banks in developed countries, keeping asset prices, from bonds to equities, very well supported. The local bond market benefited from this relatively benign global environment over the last decade, returning 8.6% in rands versus cash delivering 6.9%. However, these headline numbers hide the SA market’s rollercoaster ride since 2015 and more especially over the course of last year.

2017 was a difficult year for every South African, with the economy basically grinding to a halt as policy inaction and political uncertainty sapped confidence in the prospects of the local economy. In thinking about SA, an age-old story comes to mind. One day a farmer’s dog fell down into a well. The farmer was at a loss as the animal cried piteously for hours. Finally, he decided the animal was old, that the well needed to be covered anyway and that it was just not worth retrieving the dog. He grabbed a shovel and began to shovel dirt into the well. The dog realised what was happening and yelped horribly. Then, to the farmer’s surprise, he quietened down. A few shovel loads later, the farmer finally looked down the well and was astonished at what he saw. With every shovel of dirt that hit his back, the dog would shake it off and take a step up. As the farmer continued to shovel dirt on top of the animal, he would shake it off and climb a little bit higher. Soon, to his amazement, the dog stepped up over the edge of the well and trotted off. Could this be SA in 2018?

The last quarter of 2017 was particularly eventful in the local bond market. Following the poor Medium Term Budget Policy Statement in October, when SA’s fiscal deterioration became a reality, the local 10-year bond sold off aggressively from 8.6% to a high of just above 9.5%. As previously highlighted, these higher levels were a better reflection of underlying risks in the local economy given the policy and political backdrop.

Up to the ANC elective conference in December, SA bonds spent most of the quarter at levels of around 9.25% to 9.5%. As Cyril Ramaphosa emerged as the new president of the ANC (and possibly the country), the local bond market rallied to close the year at levels of 8.59%. Before December, there were expectations that bonds would underperform cash for the year, but the All Bond Index (ALBI) ended 2017 up 10.2% (gaining 5.66% in December alone). This is significantly above the performance of cash and inflation-linked bonds, which returned 7.1% and 2.8% respectively. The bulk of the ALBI’s performance came from the three- to seven-year and the seven- to twelve-year buckets, which both returned just over 11%, driven primarily by the falling repo rate over the course of the year.

2018 will be a very important year for SA, and the performance of the local bond market will anchor three key outcomes. The first outcome is the ability of government to push through reforms that support a recovery in growth, which is directly tied to Mr Ramaphosa being able to exert his influence as the new leader of the ruling party on policy direction. The second outcome is the trajectory of inflation over the course of the next two years and its implication for the path of the SA repo rates. Finally, the evolution of the global monetary policy environment and its impact on emerging markets will have a large bearing on the direction of international and hence local bond yields.

The issue of policy inaction has led to a steady deterioration in SA’s credit fundamentals, as illustrated by the constant downgrades of SA’s credit rating over the last two years. SA is now rated below investment grade by all but one of the rating agencies, Moody’s (which has SA one notch above subinvestment grade, but intends to pronounce judgement before the end of February). Moody’s will be looking for some evidence that government is trying to halt the current path and trajectory of fiscal deterioration, as well as for indications of pro-growth reforms. For SA to avert a downgrade to below investment grade and consequently an exit from the Citigroup World Government Bond Index (WGBI), we would have to see corrective actions implemented at many of the large state-owned enterprises to alleviate concerns around financial stability and more importantly, governance. This would imply the need for new or revamped boards and management teams that could restore confidence in these institutions. In addition, one would have to see a more fruitful partnership between government and the private sector to kick-start growth.

Whether Mr Ramaphosa can implement such changes, despite an already divided ruling party, is a question that is unfortunately beyond the scope of this report. However, given that Mr Ramaphosa is seen by the market as a reformist and corporate SA has not spent any money over the last year, we could see a boost to economic growth from ‘relief spend’ over the first two quarters of 2018, taking growth to above 1.5% for the year. Whether this growth is sustainable would rely on how quickly reforms are implemented. Moody’s will more likely than not be willing to give SA a stay of execution if there is evidence that the country is turning a corner. Even if the downgrade does come, the global backdrop and the trajectory of the SA economy will play a much more vital role in determining where the local bond market settles.

Two key developments should support a lower (or at least a more stable) inflation profile over the next year. First, the rand has rallied 11% this year, which will continue to subdue the rand price of oil and overall import inflation. Second, the recent decision to only award Eskom a 5% tariff increase, while a problem for Eskom’s liquidity, is good news for inflation. The combined effect is that, at the bare minimum, we should see inflation average 5% to 5.5% over the next two years, implying the real policy rate will average 1.75% to 1.25%. This should allow the SA Reserve Bank (SARB), at worst, to keep the repo rate stable over the next two years and probably bias the next move to the downside.

Globally, the path and pace of the increase in US interest rates will remain a key driver for global bond yields. Current market pricing suggests that the federal funds rate will move up to 2% by the end of 2019, slightly below the Federal Reserve’s (Fed) own projection of 2.25%. Even if the current term premium (the difference between the US 10-year bond and the federal funds target rate) of 100 basis points (bps) is maintained and the Fed moves its target rate to 2% to 2.25%, this implies that the US 10-year bond should be in the 3% to 3.25% range, as opposed to the current level of 2.4%. Given the current US administration’s embrace of pro-growth policies, risks to US inflation will remain tilted to the upside, suggesting the US 10-year bond might overshoot the 3% to 3.25% target. More importantly, however, as history has shown us, is the pace at which global bond yields move higher. If they continue to move higher at a gradual and measured pace, this would maintain a supportive environment for emerging markets. An abrupt change in the direction of monetary policy in the US or the EU, with both aggressively removing monetary policy accommodation, would have a more disruptive impact on emerging markets.

In the table below, we bring together the various elements of our fair value model and then incorporate some of the main points from our discussion in this article. The key takeaway is that at current levels, the SA 10-year bond is fairly valued. Under an adverse outcome (scenario B), we could see a 50 bps move higher in yields, while under a favourable outcome (scenario A), we could see a 58 bps compression in yields. Under scenario A, we assume that the market is correct and the Fed only hikes interest rates twice this year, that SA inflation averages 5% over the next year and that the country adopts a reform agenda as is currently expected. With scenario B, we assume that the Fed hikes four times, SA inflation averages at the top end of expectations (5.5%), US inflation averages 2.25% (resulting in the aforementioned four hikes) and that SA’s reform agenda takes longer to implement, resulting in a wider credit spread.

Although the risks to the implementation of policy adjustments by Mr Ramaphosa remain high, the fact that he has been appointed the leader of the ruling party and has acknowledged the need for government to clean up its act does leave the risks biased towards further compression in bond yields to the levels suggested by scenario A. 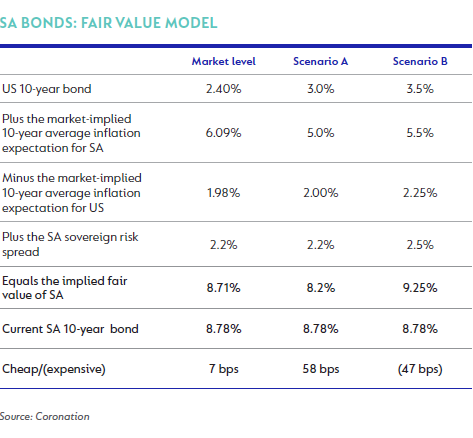 An event that could prove problematic is if Moody’s chooses to downgrade SA to subinvestment grade, resulting in an exit from the Citigroup WGBI. The magnitude of the associated outflow could be anywhere between $5 billion to $9 billion, which is quite sizeable. However, much depends on the global environment and the trajectory of the local economy. If we are still loosely following the conditions suggested in scenario A, the outflows could be easily digested. This will have very little sustained impact on bond levels, as market participants will use the flow to allocate more to SA government bonds. However, if fiscal consolidation and the reform agenda continue to be pushed out, it is likely that the SA 10-year bond will settle at levels of 9.25% to 9.5%.

Despite our expectation for a recovery in the SA economy over 2018, given the symmetric nature of the yield moves, we choose to maintain a neutral outlook on SA government bonds. To build an overweight position, we require better levels to provide a more adequate margin of safety.

Inflation-linked bonds (ILBs) had a tumultuous year, underperforming bonds and cash considerably. Given the current implied market breakeven inflation levels, we still see little value in ILBs with a maturity of greater than seven years. The market expects inflation to average above 6% (close to 7% in the longer-dated bonds), which, given our inflation expectations (5.5%), remains too rich (see the graph below).

Our preference is to hold longer-end nominal bonds instead of ILBs. The shorter end of the ILB curve remains an area of interest. Average inflation breakeven levels sit between 5.25% and 5.5%, which is more in line with our forecast and provides one with protection against inflation moving above 5.25% to 5.5%.

In addition, with the SARB’s real policy rate target being closer to 1.5%, these shorter-end real yields will remain well anchored, increasing their attractiveness.

The SA economy could be at a key turning point if the newly elected ruling party leadership is able to push through much-needed growth reforms, stabilise ailing parastatals and restore confidence in the SA economy. SA’s growth could receive a short-term boost from inventory renewal as SA corporates start to spend again after a year-long hiatus. Inflation will remain well behaved, with chances of further downside surprises adding to the case for a lower repo rate.

SA government bonds should benefit from this renewed optimism and contained inflation. However, at current levels they are only at fair value, and with exclusion from the Citigroup WGBI still a possibility, we remain cautious. 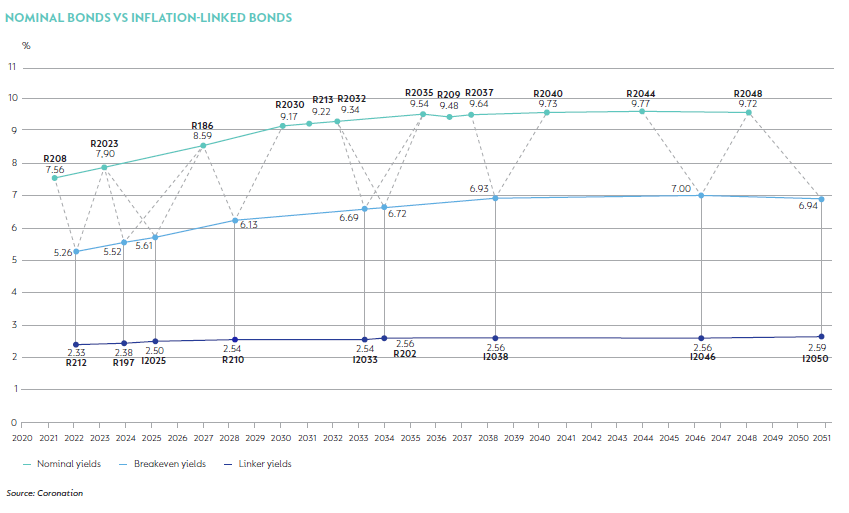