Nishan Maharaj is Head of Fixed Interest and has 19 years' of investment experience.

SOUTH AFRICAN ASSETS have had a roller coaster of a year. South African government bonds (SAGBs) traded in a 130-basis point (bp) range and, despite ending the year just above the midpoint of the trading range, still managed to outperform most emerging and developed bond markets. The FTSE/JSE All Bond Index (ALBI) was up 8.4% in local currency, but the depreciation of the rand over the year eroded most of the return. This still puts its return at -0.18% in US dollars, which is better than the FTSE World Government Bond Index at -6.97% and the JPMorgan Emerging Market Bond Index at -1.51%.

The ALBI’s return far exceeded cash at 3.55% and was driven by the outperformance of bonds with a maturity of greater than 12 years that produced a return of 12.56%. This flattening of the yield curve was in large part due to the front end of the yield curve (less than seven years’ maturity) widening relative to longer maturities. Inflation-linked bonds (ILBs), which carry a significantly higher duration than nominal bonds, saw real yields compress by almost 100bps, which helped them produce a bumper return of 15.45%. However, over three years their return (7.26%) remains below that of nominal bonds (9.11%).

The local fundamental picture remains relatively unchanged going into 2022, but high levels of unemployment and poverty mean that risks remain elevated. Fiscally, although the country remains on a better footing, deficits are still wide, and the debt load is unsustainable. SA’s saving grace is that inflation remains under control and interest rates should remain well below historic norms, providing some support to the economy. The debt trap continues to loom large and the math behind it is quite simple: SA needs to fund itself at a nominal rate that is below the nominal growth rate of the economy. Since SA does not lower its funding rate through quantitative easing like many other emerging and developed markets do, the fiscal risk premium embedded in SA bond yields will remain so for some time until investors are confident that government finances have turned around. This places the onus on nominal growth to save us from financial obscurity. SA’s effective funding rate should sit between 7% and 7.5% over the next three to five years and, with expected GDP inflation of 5% to 5.5%, it implies a required minimum real GDP growth rate of 2% to 2.5%, just to stand still. This might not sound demanding but, considering SA has only grown at 1% per annum pre-Covid, reforms and the pace thereof are key to achieving that level of growth, so that the country can avoid a debt trap over the longer term.

In Figure 1, one can clearly see how the decline in the nominal growth rate relative to the 10-year SAGB has led to an increase in the debt load. While some of this can be attributed to the growth/funding gap, the 10 years of the Zuma administration also took their toll, with a significant uptick in unproductive expenditure. The risks to the fiscus for 2022 loom large as government is under pressure to introduce an income grant to offset staggering unemployment levels, while also having to provide support to ailing State-owned enterprises and municipalities. On paper, government seems set to hold the line but, as we have become quite accustomed to in SA, the gap between intention and implementation can be quite stark. 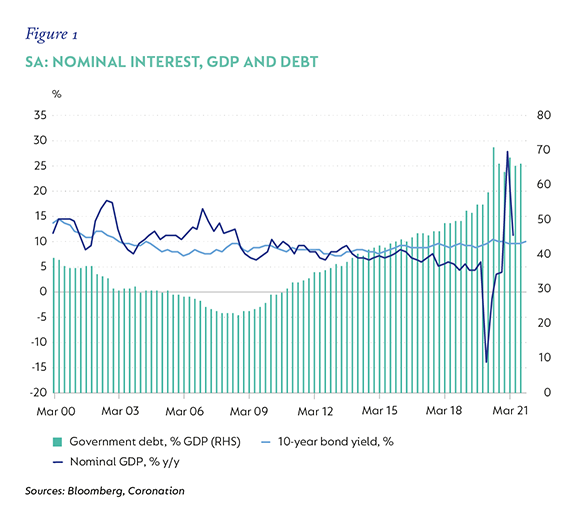 SA inflation is expected to average 5% over the next few years and the current SA sovereign spread is 3.34%. SA’s sovereign risk premium is pretty much in line with similar-rated countries in the emerging market universe (Figure 2). However, SA has traded significantly wider over time. In the last two years, the SA risk premium has been around 50bps wider than those of traditionally BB-rated peers. 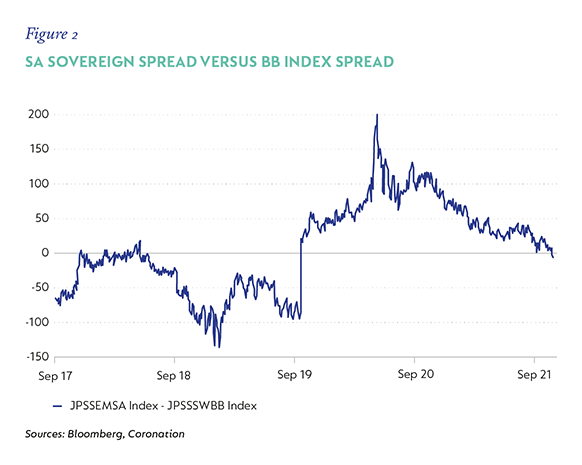 This might seem conservative given the current fiscal trajectory, but we believe it is appropriate considering the risks on the horizon. Using a revised sovereign risk premium of 3.84%, the expected fair value for the 10-year SAGB is 9.34%, calculated as follows: (3% [US 10-year T-Bill] + 5% [SA expected inflation] - 2.5% [US expected inflation] + 3.84% [SA sovereign spread]). Even with these more conservative assumptions, the SAGB fair value is considerably lower than the current SAGB 10-year yield of 9.8%. This suggests, from a local perspective at least, that SAGBs still encapsulate a significant risk premium even if fiscal conditions deteriorate further.

INFLATION IS A KEY FACTOR

Global conditions, and more specifically global monetary policy, have been a large driver of the emerging market bond appetite and its bond yields. US inflation is expected to touch 7% at the end of 2021, before starting its gradual retreat towards 2.5% over the next year. The risk is that US inflation remains higher for longer, prompting a more aggressive monetary policy response from the Federal Reserve Board (the Fed) that sends bond yields soaring and sinks risk appetite. Current market pricing puts US inflation expectations at a 3.5% average for 2022 and 3% average for 2023, with the Fed fund rates expected to increase to 1.75% by end-2023. The US 10-year T-Bill currently trades at 1.75%, while the expectations for five-year rates in five years’ time sit at 2%. Pre-pandemic, the US 10-year T-Bill generally traded 0.5% to 1% above US inflation (Figure 3), which is in line with US real policy rates of 0.5% to 1%. This would imply that US 10-year rates are too low and need to trade somewhere in the range of 3.5% to 4.5% if the current expectations for inflation are correct. 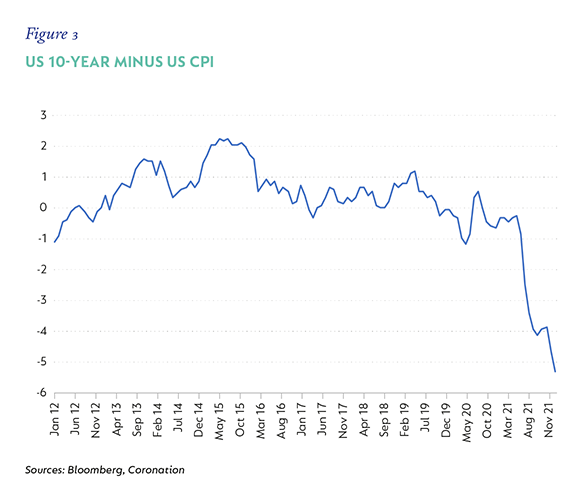 There are, however, two caveats. First, the US debt load is 50% larger than it was pre-pandemic, which suggests that real rates might now need to be in the region of 0% to 0.5% to keep growth buoyant and debt levels contained. Secondly, current high levels of inflation are being driven by supply chain bottlenecks, which are leading to low supplies and higher prices for consumer electronics, appliances and many other products. In addition, there has been a spike in travel-
related expenses after they collapsed in 2020. These bottlenecks are starting to ease and travel expenses will normalise, which suggest these items might prove to be less of a contributor to inflation in 2022. The Fed has acknowledged that current inflation trends are proving sticky, and in the most recent Federal Open Market Committee meeting, it doubled the tapering of asset purchases and alluded to bringing forward the interest rate hiking cycle. Moving rates from 0% to 1.75% might not seem a lot, but it does mean that one’s cost of financing goes up substantially, which dampens consumer spending.

Bringing this together, US inflation will indeed be higher than we have experienced, but most likely in the 2.5% to 3% range, and real rates are going to be lower, in the 0% to 0.5% range, which implies a fair US 10-year rate of 2.5% to 3.5%. If this repricing occurs in a very short period, emerging market bond markets will take quite a bit of strain, but if it happens gradually, it might be a supportive environment for risk and emerging markets.

SAGBs will feel the repercussions of the inflation debate through two key areas; first, as the global risk-free rate rises and secondly, through the inflation differential between SA and the rest of the world. Half of the basket in SA is made up of food (17%), rent (12%), transport (15%) and insurance (10%). Food prices are already peaking and bumper crops should help keep food inflation contained. Rental inflation collapsed during 2020 and although it has started its slow climb back up, it is unlikely to progress much past 4% over the next two to three years. Healthy competition and new entrants into the insurance sector should help to keep a lid on premiums, while transport remains the only wild card as SA is a net importer of oil and, hence, at the mercy of global oil prices. SA has a very orthodox and credible central bank that wants to keep inflation at the midpoint of the band, and it is expected that the inflation targeting band will be revised lower at an upcoming macro review. This lends support to an SA inflation outcome that is around 5%.

The outcome for SAGBs is therefore not as severe as history might suggest and, given the high risk premium already encapsulated in SAGB yields, it is possible that SAGBs fare better than expected over this turbulent period of global and local monetary policy normalisation.

ILBs had quite a recovery in 2021 but started from a much weaker position than nominal bonds. Nonetheless, there remains selective value across the ILB curve. Real yields are elevated across the curve, with implied breakeven inflation significantly lower than current expectations for local inflation in some areas. Despite the 4% real yields at the longer end of the ILB curve, these bonds carry a significantly higher duration (almost 2.5 times their nominal equivalent), with implied breakeven inflation of well above 6%. We continue to believe that there is better value in the nominal bond curve for bonds with a maturity of greater than 12 years, given the steepness of the nominal curve, longer duration and higher implied real yields. However, given the high real yields in the four- to nine-year area and low breakeven inflation, we view this as an attractive investment opportunity and relatively better value than the nominal bond curve in the same area – especially since one is effectively getting the inflation protection for free. This is illustrated in Figure 4. 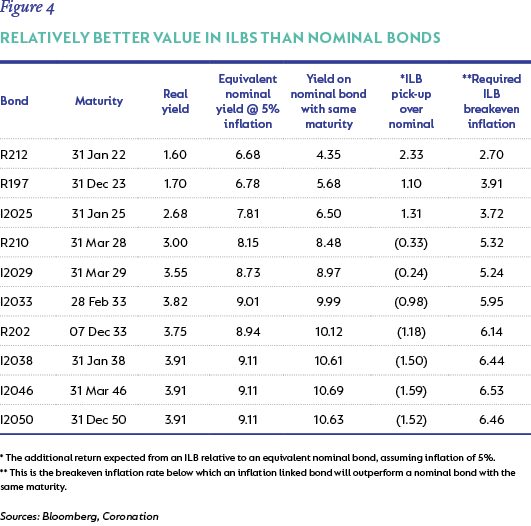 The local economy remains on track to recovery; however, the repercussions of the pandemic continue to reverberate in the form of high unemployment, increased levels of poverty and reduced business confidence. Government finances remain fragile and increased demands on the fiscus threaten to increase the debt load further, which could push the country into a debt trap at some time in the future. Inflation is moving higher but should remain under control despite uneasiness around global inflation. Despite the precarious local backdrop amidst the turbulence caused by local and global monetary policy normalisation, SAGBs still encapsulate a significant risk premium and large margin of safety. We continue to view overweight positions to bonds in the 10- to 15-year area of the curve as attractive. In addition, we believe ILBs in the four- to nine-year area offer good value due to high real yields and embedded inflation protection.+

Nishan Maharaj is Head of Fixed Interest and has 19 years' of investment experience.