The grass is not always greener

“I’m no genius, but I’m smart in spots, and I stay around those spots.” – Tom Watson Snr, founder of IBM

WARREN BUFFETT FREQUENTLY uses the concept of the ‘circle of competence’ in his letters to Berkshire Hathaway share­holders to illustrate the importance of staying focused. This applies equally to capital allocation decisions in a business. Despite building formidable businesses and raising the barriers to entry for new entrants during years of operating in a closed, domestic economy pre-1994, there is a preoccupation among many South African management teams that the grass is greener elsewhere. This has led many domestic companies to expand offshore, usually by acquisition, the majority of which have had disastrous consequences for shareholders.

There is the odd success story, but they are the exception rather than the rule. Offshore acquisitions by domestic companies have been pervasive across sectors – as an example, virtually every major South African life insurer and commercial bank has acquired a business outside of South Africa. Of the numerous examples in our market, two of the larger transactions recently undertaken are interesting case studies.

Woolworths Holdings announced in April 2014 that it would pay R21.4 billion (A$2.1 billion) for David Jones, the iconic Australian department store. David Jones services the more affluent Australian consumer through a network of 38 stores, four of which it owned, including the flagship department stores in Sydney and Melbourne. This was a sizeable transaction, comprising nearly a third of Woolworths’ market capitalisation at the time, and valued David Jones at a 21 times price earnings multiple based on its last reported earnings.

While South African retailers have a dismal track record in acquiring businesses in Australia – most notably Pick n Pay’s failed acquisition of Franklins and Truworths International’s unsuccessful foray with Sportsgirl – investors were prepared to back Woolworths CEO Ian Moir.

Moir was appointed CEO in November 2010 after success­fully turning around Country Road, another Australian retailer acquired by Woolworths in 1998. Up until the acquisition of David Jones, Moir had an enviable track record – Group revenue and profits grew strongly during his tenure, compounding at 14% and 23% per annum, respec­tively. Although department stores have come under threat globally, losing market share to specialist and online retailers, the rationale for acquiring David Jones sounded compelling:

The net result of these initiatives was an expected uplift of between A$130 million and A$170 million per annum in incremental earnings within the next five years. This was significant in the context of David Jones having generated A$143 million operating profit at the time of acquisition. 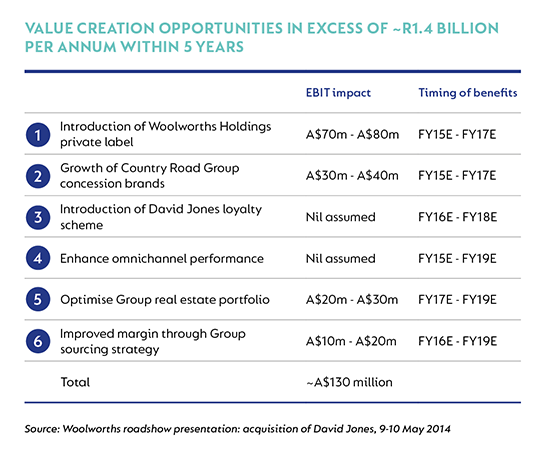 This target was described as ‘conservative’ by Woolworths, indicating its confidence in extracting these synergies, thereby justifying the high price paid. Initially, this confidence was vindicated as profitability improved at David Jones. Woolworths appeared to be executing flawlessly and seemed to uncover further opportunities to enhance value, including launching a fresh and prepared foods business in Australia.

David Jones grew sales ahead of the market, gaining market share from its major competitor, Myer. Margins expanded and nearly a fifth of the purchase price was recouped when it sold its Market Street property in Sydney to the Scentre Group for A$360 million.

These proceeds would be used to fund its capital expenditure programme, including the implementation of new IT and finance systems, relocating its head office to join that of Country Road in Melbourne, refurbishing its flagship Elizabeth Street store, and trialling its food concept.

All appeared to be going according to plan, until trading took a turn for the worse in 2017, due to the following factors: 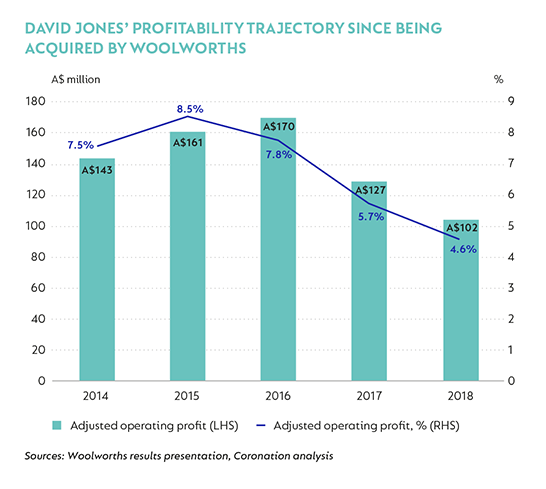 The above graph shows how profitability grew during the first two years post-acquisition, reaching a peak of A$170 million before collapsing and eventually troughing at A$102 million – a decline of 29% since acquisition and 40% from the peak.

This decline weighed heavily on Woolworths’ investment in David Jones and culminated in an impairment charge of A$712.5 million (R6.9 billion) taken in January 2018, effectively writing off a third of its initial investment.

Woolworths’ transformative initiatives appear sound – a similar strategy has been adopted by successful department stores elsewhere in the world such as John Lewis, Selfridges and Bon Marche – and should enable David Jones to compete more effectively against online and specialist retailers, and to address the impact of undermanagement.

While Woolworths may be able to extract some value from David Jones in the short term, there is a significant risk that it has acquired a ‘melting ice cube’ – department stores globally are increasingly under threat from online retailers and changing consumer shopping patterns. It is possible that it will continue to lose relevance over time.

This would be a disappointing outcome for shareholders, not only in terms of the potential value at risk, but also the significant management distraction away from the core South African operations. It will become evident over the next 18 months which way this investment is panning out.

In late 2012, Sasol announced that it was progressing the front-end engineering and design of the Lake Charles Chemicals Project (LCCP), an ethane cracker and gas-to-liquids (GTL) project in Lake Charles, Louisiana, on the Gulf of Mexico.

The advent of the US shale industry meant that it would have surplus natural gas, including ethane and methane gas. An ethane cracker uses ethane gas, and processes or ‘cracks’ it into ethylene and other derivative products. A GTL plant uses a refinery process to convert methane gas into longer-chain hydrocarbons, such as diesel.

The prices of these finished products are determined relative to the oil price. Effectively, the LCCP was looking to exploit the price differential between cheap feedstock (due to a surplus of natural gas caused by the booming shale industry) and a high oil price.

In October 2014, Sasol announced the final approval for the LCCP, with beneficial operation expected to begin in 2018.

The total expected cost of approximately $8.9 billion, c. 27% of Sasol’s market capitalisation at the time, was roughly $3 billion to $4 billion higher than comparable ethane cracker projects being constructed in the region by peers such as Dow Chemical Company and Chevron Phillips Chemical Company. Sasol justified this differential due to:

Despite the significant project cost, Sasol’s management was confident that the LCCP investment case was sound and ticked all the necessary boxes.

The economics of the LCCP were initially based on the following key assumptions:

Based on these assumptions, Sasol was confident that the case for LCCP was robust and it was expected to exceed its hurdle rate of 10.4% in US dollar terms (1.3 times Sasol’s weighted average cost of capital [WACC]).

Anyone who has ever built or renovated a house knows that large projects are unlikely to be completed timeously and on budget. This well-known fact, combined with the vagaries of oil and natural gas price fluctuations, meant that the LCCP was doomed to overrun. The ‘robust’ economics of the LCCP would soon be tested by external and internal conditions:

While these delays resulted in an approximate 25% increase in the cost of the LCCP to just over $11 billion, conditions deteriorated again in early 2019, as follows:

The significant cost slippage and value destruction from the time of first approving the LCCP are apparent in the following table.

The extent of cost overruns is truly breathtaking, and the impact on Sasol and its shareholders has been significant:

While the value destruction suffered by shareholders is significant, the risks facing the LCCP have not abated. There is the potential for further overruns should the ramp-up transpire slower than envisaged. More importantly, the commodity cycle for the key chemicals that will be produced by the LCCP could change if global demand for these products slows. Given that these are niche products, any small changes in demand will have an outsized impact on the expected profitability of the LCCP, thereby further impacting on the project’s ability to add value.

There is a well-known aphorism that states: “The road to hell is paved with good intentions”. In a weak domestic economy, virtually every management team must feel the temptation to diversify offshore. However, these are not regions in which they have a competitive advantage and are almost certain to distract them from their local businesses.

Despite having the best intentions when looking to expand by acquiring businesses offshore, history, as demonstrated by the above examples, shows that reality can differ significantly from the attractive returns promised by a spreadsheet. What appears to be heaven can end up as hell for shareholders. With this in mind, as active investors, we continue to engage with the management teams and boards of directors of investee companies where we feel there is a risk of value being destroyed to ensure the best outcome for our clients over the long term.