PORTFOLIO MANAGER
Peter Leger is the head of Coronation’s Global Frontiers unit and has been managing the Global Frontiers portfolios since inception. Peter has 18 years' investment experience of which the last nine were spent analysing and managing assets in frontier markets.

The Coronation Global Frontiers strategy seeks to invest in listed companies that are attractively priced and can best benefit from rapid growth in emergent economies. The strategy has outperformed the MSCI Frontier Markets Index (US$) by 5.1% per annum since inception. 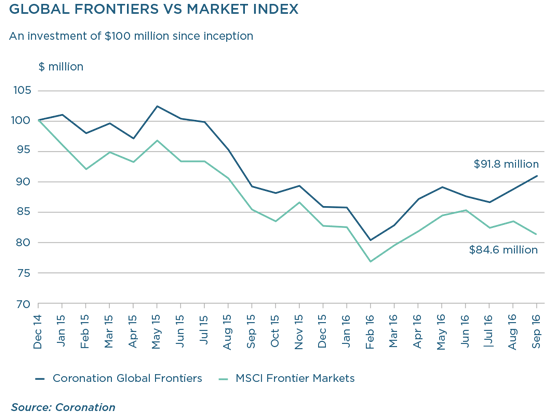 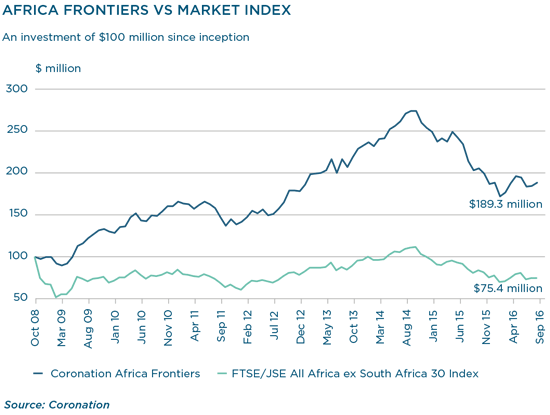 An illustration of our longer-term investment track record in frontier markets is the annualised alpha of 7.8% (gross of fees) delivered by the Coronation Africa Frontiers strategy since its inception in October 2008 (see previous graph).

Coronation Global Frontiers follows a long-term, valuation-driven investment philosophy. We emphasise bottom-up stock selection rather than top-down geographic allocation or macro themes, an approach that has been applied across all our strategies for more than two decades.

The portfolio holds shares which we believe offer the most attractive risk-adjusted fair value relative to current market prices. Given the lack of reliable information in many frontier markets, calculating what we believe to be the fair value of a business requires intensive on-the-ground research, constant contact with management teams and detailed financial modelling that focuses on through-the-cycle normalised earnings and free cash flows over the long term. 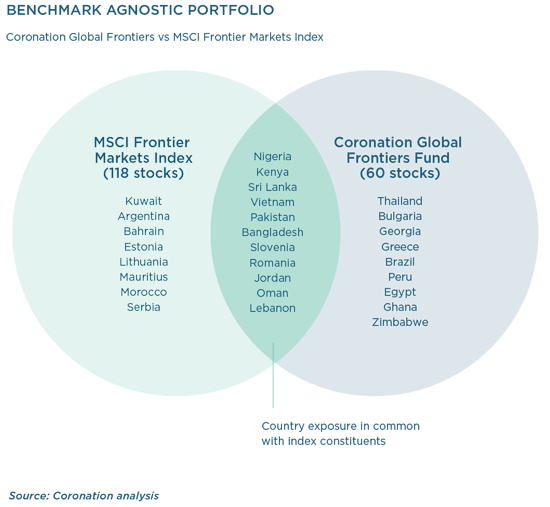 To take advantage of the long-term structural growth in emerging economies, particularly for frontiers, buying the market is generally a bad idea in our view. The Global Frontiers portfolio is therefore constructed without reference to a benchmark. Currently, Kuwait (17%) and Argentina (15%) are the biggest constituents of the MSCI Frontier Markets Index. In our view, this is not a fair reflection of the grouping’s investment potential. In fact, our Global Frontiers strategy does not have any exposure to these countries at this point.

The strategy’s mandate also allows it to invest in small-cap emerging market stocks. The frontier team works closely with Coronation’s emerging market analysts to identify attractive holdings. Since its inception in 2008, the Global Emerging Markets (GEM) team has acquired extensive expertise in different emerging markets and sectors. For example, with 17% of the Coronation GEM Equity strategy invested in Brazil, the team’s analysts visit that country at least twice a year to meet with management teams and industry experts.

Recently, based on the GEM team’s extensive research of the Brazilian clothing sector, a local group named Guararapes Confecções was suggested as a Global Frontiers holding. The company, which owns the third-largest domestic clothing retailer and operates in an attractive market, is currently trading far below our assessment of its fair value. Liquidity in its shares is restricted due to management owning 76% of the company, disqualifying it as an investment for larger funds.

A somewhat higher risk tolerance and a more cleanslate mindset are required when investing in the frontier asset class, given the volatility in these markets and their currencies, as well as the lack of liquidity in shares.

Risk management is integrated into our investment process and portfolio construction. We define risk as a permanent loss of capital and as such the process of managing risk begins with the universe of shares we are prepared to invest (at the right price), the long-term approach to determining fair value, the required rate of return for the different markets and securites to compensate us for the risk taken, and finally the position size of a stock in the portolio. We reassess our long-term earnings forecasts and levels of conviction in all our investments continuously. In the frontier space we would typically require a higher margin of safety between our assessment of fair value and the share price before taking a position. Similarly, we are disciplined about selling shares as a share price approaches fair value.

We expect exciting returns from select frontier markets in coming years, reflecting the long runway of economic growth in many of these markets. The per capita consumption of consumer and capital goods continues to be a fraction of that in other markets. Many companies stand to benefit from the formalising of their developing economies, and have large scope to build additional scale quickly, which will have a large impact on profits. We are excited by these developments and believe valuations are still compelling.

Currently, the Global Frontiers strategy’s largest exposure is to Egypt, where valuations are extremely depressed following two revolutions and the Arab Spring. We believe the country has some of the highest quality companies and management teams in the world today. However, despite the return of political stability and recent economic reforms, share prices remain deeply discounted. We have a number of attractive holdings in Egypt, including a sizeable exposure to the cigarette manufacturer Eastern Tobacco. Since 1920, the company has enjoyed the status of monopoly manufacturer in one of the only tobacco markets worldwide that is still growing. Despite this, Eastern Tobacco is trading at a large discount to its global peers and offers significant upside to our estimate of its fair value. Following several years of poor capital allocation, new management has been appointed and initial interventions have been encouraging. We expect shareholders will be rewarded with increased dividends and strong returns on their investments.

Another sizeable exposure in the strategy is that of Hemas, a Sri Lankan family-run conglomerate with exposure to the fast-moving consumer goods (FMCG), leisure and transport sectors. Hemas is run with a focus on shareholder return and currently in the midst of restructuring into a professional outfit. While the value unlock has already begun, management's renewed focus on its core FMCG and healthcare businesses, coupled with further potential disposals, make for a compelling investment case in our view.

Currently, the overall weighted-average upside to fair value of the stocks in the Global Frontiers portfolio is around 57%, with the average one-year forward price earnings ratio only 11 times. We believe the strategy is well-placed to deliver meaningful investment returns over the long term.