Looking back, average growth in SA has slowed from 4.3% per annum in the eight years before the financial crisis in 2008, to 3% in 2010 to 2012, and just under 2% over the past four years. Since 2012, key developments have had a negative impact on growth and confidence, also impacting the currency. The first event was the tragic loss of life at Marikana in 2012, followed by a prolonged period of labour hostilities through 2014. In 2015 came Nenegate, allegations of high-level corruption and renewed turmoil in the ANC. 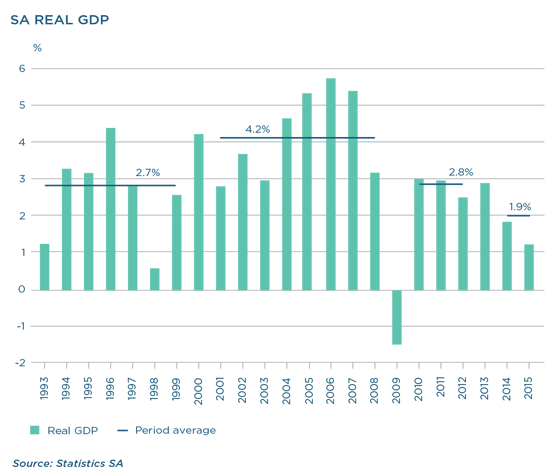 The good news for this year is that many of these constraints have either started to ease, or have been remedied. Before we get into the details, let us first address the elephant in the room: the fluid SA political landscape. While the president has both the right and ability to change members of his cabinet, the internal power balance within the ruling ANC has so far limited the choices he has been able to implement. Still, it is difficult to monitor and assess shifts in the balance of power.

Politics will most likely continue to dominate markets from time to time this year. It is also important to remember that the ANC will hold its own elective conference at the end of 2017, ahead of the national elections in 2019. It is at this conference that the party will elect new leadership for the following five years. The likely presidential candidate for the national elections will emerge from these contenders. Accordingly, political positioning will be a constant feature in SA in 2017.

Turning to the economy, there is enough evidence to suggest that growth will improve this year, off a very weak base. The worst drought in decades saw agricultural output shrink by 8.8% by the third quarter of 2016, compared to the same period the year before. Mining output contracted 3.4% on the same basis and the secondary sectors – manufacturing, utilities and construction – were flat, with the only growth coming from trade, business services and government. In all cases the growth registered by these sectors was lacklustre at best, and slowed towards the end of the year.

Looking at the data from the demand side, household spending – 60% of total GDP – weakened through the year as the impact of rising inflation (notably in food prices, which hit 11.8% in the year to October) and a cumulative 200 basis points in interest rate hikes since 2014 compounded job losses. Gross fixed capital formation, including inventory restocking, has suffered amid ongoing weak global demand, falling commodity prices and (until recently) fraught labour relations. Poor confidence and political uncertainty still weighed, and capital expenditure was flat through most of 2016. Net trade, however, was a positive contributor to growth as domestic terms of trade improved and a combination of better exports and weaker imports saw a recovery in the trade balance.

Global growth is expected to accelerate from 3% to about 3.5% (International Monetary Fund: 3.4%), boosted by stimulus and improved confidence in the US, decent momentum from Europe, and better economic performance from emerging markets, notably Russia and Brazil, which have suffered recessionary conditions in 2016. This should help support commodity prices, and an improvement in investment in these economies should see an improvement in global trade.

The good news for the SA economy should be supported by four other baseline assumptions. Firstly, lower inflation should help improve real incomes, and lower food inflation in particular should alleviate some of the pressure on middle- and lower-income households. Then, interest rates will not be hiked, and may even head lower late this year. Thirdly, improved confidence could see a modest rise in investment and, lastly, terms of trade should remain relatively favourable.

Headline CPI accelerated to 7% year-on-year in February last year, moderating slightly to a second peak of 6.6% in November. We expect CPI to average 6.3% in 2016. The main driver was rising food inflation, partly owing to the impact of the drought, but also reflecting the wider impact of a weaker currency on retail fuel and imported goods prices. Food inflation accelerated to almost 12% towards the end of the year, from 7.1% year-on-year in January. Decent rainfall in key crop-growing regions late last year has seen farmers planning to plant 26.5% more hectares of maize, and a total increase of 15% in the overall planting of summer crops.

The price of white maize has fallen almost 40% from its peak to current levels. Global stock levels remain high and imports could provide a possible reprieve in the early part of the year when domestic stocks run low. Accordingly, we expect grain input prices to moderate back towards export parity. Given the impact of the drought on cattle herds, meat prices could be a little slower to adjust, but base effects alone should ensure a significantly slower pace of food inflation (we estimate 3.4% on average this year from 10.7% in 2016), with fierce retail competition skewing the risk to lower rather than higher prices. 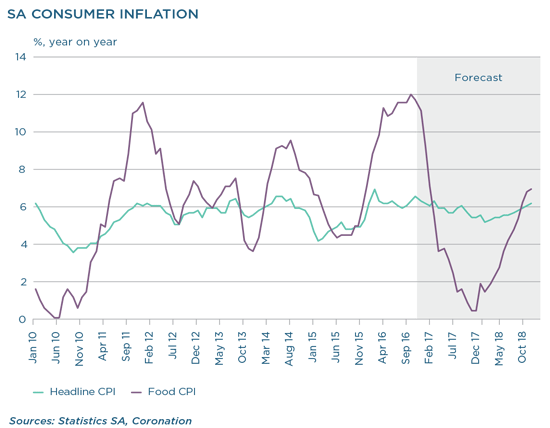 The rate of change in inflation (how quickly it rises or falls) has a meaningful impact on disposable incomes, and the deceleration in prices should bolster real household incomes. It is possible that fiscal drag (perhaps in combination with outright tax hikes) may offset some of these gains, but all else being equal there should still be an improvement in household spending power in 2017.

Fixed investment growth should also return to mildly positive rates. Overall investment spending has been boosted by government and state-owned entities since the financial crisis, while private sector investment remained weak. Here too, are signs of some improvement. Labour relations have become less hostile, and days lost to strike activity have fallen meaningfully in the past two years. Also, more stable commodity prices and even a modest pick-up in global trade volumes may boost investment, even for stock replacement. The intensification of political tension in 2016 has also prompted some improvement in dialogue between government and the private sector, which may support business confidence and increase companies’ willingness to invest. This is of course vulnerable to political ructions, already a significant constraint on investment.

The prospects for the domestic terms of trade are very hard to assess. A revival in domestic demand could well support stronger import growth, but then again, key export commodities have rallied along with the recent rise in oil prices.

Taken together, our baseline growth forecast is for an acceleration in real GDP to 1.4% in 2017 from 0.3% last year. 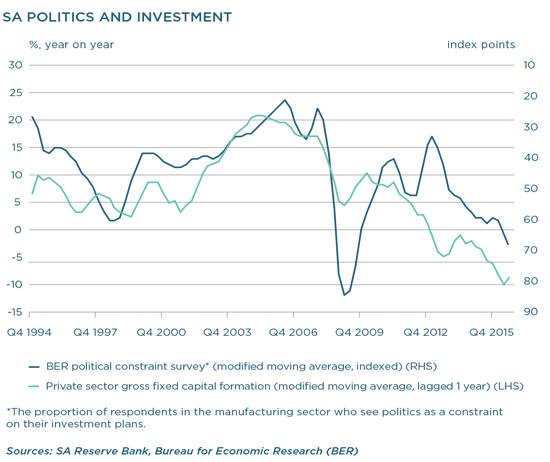 We expect inflation to moderate to 5.2% by year-end, and to average 5.8% this year. Early-year increases in retail fuel prices have put pressure on inflation, but there is still some downside risk: cooling food inflation could drag the forecast even lower. Given better growth and falling inflation, we think the SA Reserve Bank will keep interest rates on hold for some time, but modest rate cuts may even be expected by year-end.

These projections are hardly buoyant, and the rise in growth is not yet a reflection of easing structural constraints. Instead, it will be a cyclical improvement off a deeply constrained base. As with all baseline projections, and especially in a world where unpredictable political and economic shocks can jolt markets, forward-looking optimism can be derailed by unforeseen or low-probability events not included in our analyses. That said, just a little lower inflation should go some way to ease the pressure of 2016.