As we go to print, headlines could scarcely be gloomier. The barrage of bad news is unending, from nuclear threats, natural disasters, mass killings and raging corruption to alarming accounts of assaults against women in a supposedly progressive industry.

The accusations against Harvey Weinstein are depressingly familiar: powerful man harms women, finds shelter in misogynist culture of impunity. We see these dynamics play out with dispiriting regularity all over the world and also in SA. For most of history, women have not had equal access to formal structures of power. Far too often we are confronted with stories of women being objectified, stereotyped and discriminated against, and simply not having the same freedom as men.

I recently caught a glimpse of how this manifests in workplaces across the country. To commemorate Women’s Month in August, Coronation held a number of events for clients and high-school learners. In SA, women have been at the forefront of the struggle for transformation. Yet the stories told by many women and girls reflected the systemic discrimination they face, the sometimes blatant but more frequently subtle sexism which is often reflected in a ‘low inclusion’ culture. At work, many experience prejudice and have been sidelined because they are not part of a male alliance or do not easily fit into a male-derived culture. At home, they shoulder many more unpaid hours of domestic work and care responsibility for an extended family network. What makes matters worse is that the wage gap is still painfully evident, despite how far we have come over the past 100 years. All of this has left many women disillusioned and exhausted.

I have been fortunate in my career to have found a home in an organisation like Coronation that fundamentally is premised on gender-neutral, race-neutral output. This has had a tremendous impact on my own personal growth and on my career. We remain determined to fight biases and equip all our staff (53% of us are female) with the tools to succeed, and the recent launch of the Lean In programme at Coronation forms part of this.

Unfortunately, all the programmes in the world will not eliminate gender discrimination and assaults against women and girls. We need more leaders – male and female – to use their power to advance gender equality and ensure power is no longer used against women.

This issue of Corospondent examines many of the deeply concerning geopolitical headlines that have dominated the news for some time. To give context and analysis, we turned to the chief foreign affairs commentator at the Financial Times, Gideon Rachman, for his insights. Inside is his exclusive assessment of the current crisis in Korea. A sobering read, he warns of the risk of nuclear attacks if the North Korean leader is faced with the prospect of the collapse of his regime.

While the global environment seems overcast, Europe is shakily emerging as an unexpected bright spot. Our economist Marie Antelme explores the reprieve granted to the continent after the latest round of elections. She argues that Europe should embrace this window of opportunity for economic reform.

We know that Bitcoin is a hot topic. When a Financial Times headline reads, “Dimon and Fink unite on need to ‘crush’ Bitcoin”, you know that the topic has taken on supernova status. Neville Chester dissects and destroys the investment case for the current batch of cryptocurrencies. While we remain excited about the possibilities of blockchain technology and expect a reputable digital currency soon, we do not believe one of the current contenders will survive.

There is no shortage of true investments in this edition, and we include analysis of the SA retail group Spar and Airbus, the European aircraft manufacturer. Airbus has long been an unloved stock and may look like an unexpected addition to our portfolios, especially our Global Emerging Markets Equity strategy. But our extensive research shows that Airbus is trading well below our estimate of its fair value, and that the company has a long runway (yes, pun intended) of growth. As an emerging market company, we also understand the potential demand for its products outside the developed world.

We believe this homegrown perspective on emerging markets provides us with a competitive edge in investing across the globe. We see the world from a different perspective – where others may only see risk, we have successfully identified long-term opportunities over the years, as is evident from the track record of the Coronation Global Emerging Markets Equity strategy. As the world economy evolves, we believe that an allocation to emerging markets is becoming increasingly obligatory.

The latest Nobel prize in economics was recently awarded to professor Richard Thaler, whose research in behavioural economics uncovered the importance of ‘nudging’ consumers into making better decisions for the long term. We believe the new retirement default regulations which were recently adopted in SA will provide some important nudges to help retirement savers stay on track.

This is a bumper edition – we hope you enjoy the read. 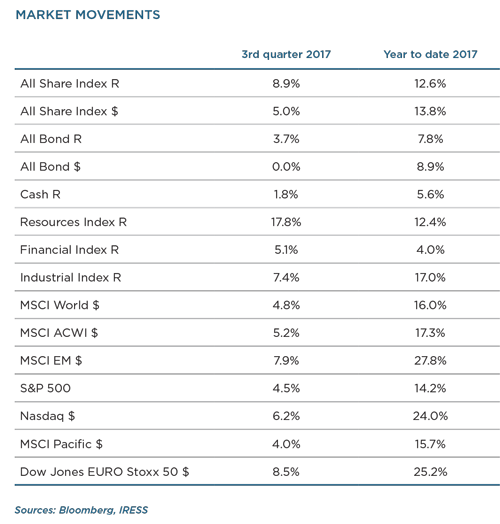