THE CORONATION GLOBAL Emerging Markets Strategy returned 11.3% during the third quarter, 1.7% ahead of the 9.6% return of the benchmark MSCI Global Emerging Markets Total Return Index. With this outperformance, the Strategy has provided a return of 3.6% in 2020, 4.7% ahead of the -1.2% return of the benchmark. If one looks back at how markets performed in the first quarter of 2020 and the general panic that accompanied the worldwide spread of the coronavirus, it is quite pleasing to have both positive absolute returns this year and alpha. Of course, the longer-term returns remain the most important consideration. In this regard, the Strategy has outperformed over all meaningful time periods since inception in 2008; by 4.8% p.a. over five years, 3.5% p.a. over 10 years and 4.4% p.a. since inception just over 12 years ago.

The largest contributor to outperformance in the quarter was Wuliangye Yibin. The Baijiu (local Chinese spirits) producer returned 34% in the period, providing 0.9% of alpha to the Strategy. Having clamped down hard and early – we have heard interesting first-hand accounts of the restrictions placed on daily life in China during its lockdown – China’s economy has stabilised and returned towards normality faster than anticipated, and many Chinese shares have benefited from this.

The second-largest contributor was JD.com, up 29% to add 0.7% to alpha. JD.com can be thought of as the ‘Amazon’ of China; a large part of what it sells is its own inventory and deliveries use its own fulfilment infrastructure. China was already the country with the highest e-commerce penetration in the world prior to 2020; a combination of highly innovative e-commerce retailers that the mediocre pre-existing physical retailers struggled to compete with. The high level of adoption of digital payment methods further enables e-commerce. In spite of being already well established in the minds of the consumer, JD.com has benefited tremendously from the demand uplift that accompanied lockdowns.

We spoke about the 21% revenue growth in Q1-20 in our last commentary, but Q2-20 results (reported mid-August) were even better, with revenues up 34%, well above consensus of 27%. Even more impressive was the rise in operating profit, up 75% year on year, with margins rising to 2.8% from 2.1% in the same period last year. This led to a 50% increase in earnings per share. All this was driven by a 30% rise in active customers. Most importantly, this operating performance was accompanied by strong free cash flow generation.

Unsurprisingly, the share reacted very positively after the results announcement, moving from around $64 to as high as $83. JD.com was already the largest retailer in China heading into 2019 and this position of strength will be further enhanced by its operational performance in 2020. 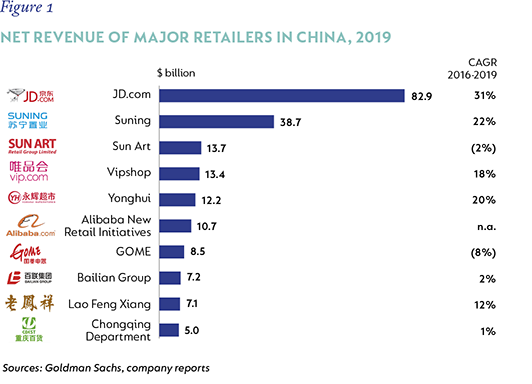 Like several other US-listed Chinese companies, JD.com did a secondary listing in Hong Kong, raising $4 billion, and ended the quarter with $18 billion in cash, around 15% of market cap. The secondary listing was part of a wider move by prominent Chinese companies to reduce their exposure to US capital markets over fears that the US might unilat­erally impose onerous requirements on Chinese companies that they might not be able to meet, as the Chinese government is not fond of foreigners exercising regulatory oversight of Chinese-domiciled businesses.

The list of companies that have done this now includes other Strategy holdings like Alibaba, NetEase and Yum China. This transfer of trading volume towards Hong Kong is part of the investment case for the Hong Kong Stock Exchange, which is a small position in the Strategy (0.5%).

Russian holding Yandex was the next-largest contributor. Up 30% in the quarter, it added 0.5% to alpha. Yandex has more than doubled from the low it reached in March (under $30) and we have trimmed the position as it has appreciated, having bought when it was under pressure in Q1-20. The 2.1% position size that remains reflects the reason­able valuation and positive long-term outlook for Yandex, which has evolved beyond search to be a meaningful player in many other sectors such as ridesharing and e-commerce. More recently, Yandex has bid to acquire TCS, Russia’s largest digital bank. The last two of the top five contributors to alpha were the underweight in Tencent, which lagged the market by being up only 3% in the quarter (0.4% alpha), and Brazilian digital payments solution provider StoneCo, up 37% for 0.3% contribution to alpha.

The biggest detractor was the underweight in Taiwan Semiconductor Manufacturing Company (TSMC), the third-largest stock in the index. TSMC was up 42% in the quarter and the underweight cost the Strategy 0.7%. We are very positive on the company but feel that a 3% position is more appropriate, given its risk-adjusted expected return and internal rate of return relative to the rest of the investment universe. TSMC reported excellent results for the first half of 2020 (net income up close to 90% versus last year). There have also been continued stumbles by one of its main competitors, Intel, which announced that it is at least a year behind schedule in manufacturing the next generation of 7nm chips. This means that TSMC’s competitive positioning is probably the strongest it has ever been.

The Mexican holding company FEMSA (2.6% of Strategy) fell 8% in the quarter and cost 0.5% of alpha. Mexico continues to struggle in dealing with Covid-19 and most of FEMSA’s main assets were negatively affected. The largest contributor to FEMSA, the convenience store chain Oxxo, which is about half of our sum-of-the-parts valuation, saw its operations hampered by lockdowns and bans on the sale of alcohol (a large contributor to sales). FEMSA’s 15% stake in global brewer Heineken, which makes up roughly 25% of the company’s valuation, was also hurt by the 8% decline in the share price of Heineken. Heineken has been under pressure as the index is weighted disproportionately toward premium beers, which tend to be sold on premise (where margins are higher) rather than in supermar­kets (lower margin). With global curbs on socialising, Heineken has seen volumes fall 12% in the first half of 2020.

NEW BUYS IN THE PERIOD

There were three new buys in the quarter – Samsung Electronics, BGF Retail and PagSeguro. Samsung needs no introduction, as the Strategy has owned it at various points in the past, but developments in the chip and memory industries, which are increas­ingly consolidated and with returns accruing to the top players disproportionately over time, led us to repurchase it into the Strategy. Unlike TSMC, Samsung’s share price remains below where it was before the Covid-19-induced market selloff that started in February. Despite a 40% recovery from the lows reached in March, Samsung still trades on less than 12 times forecasted earnings for the 2021 fiscal year, with a 3% dividend yield and close to a third of its market cap in cash. By quarter-end, Samsung was 2.2% of the Strategy.

BGF Retail is a South Korean convenience retailer and was bought into the Strategy (0.4% position) for the first time. BGF operates in the convenience value service segment, which is attractive in a country like South Korea where there is a very high degree of urbanisation, high population density and small household size.

The segment has doubled market share over the last decade to 7%, but this is still below that of regional peers with similar demographics and drivers like Taiwan and Japan. With challenged formats like department stores, hypermarkets and specialty stores still making up over 50% of retail sales in the country, there is still reason­able market share up for grabs. BGF trades on 14 times forward earnings, has a net cash balance and consistently generates returns on equity in excess of 20%.

The last new buy was PagSeguro, a Brazilian financial services company catering primarily to small merchants in that country. Small merchants make up the long tail of customers in Brazil, and have traditionally been averse to accepting card payments due to the high fees charged by the other acquirers and banks for this facility. PagSeguro already has 5.5 million active merchants using its payment functionality and 3.7 million using its fully digital bank accounts.

Like StoneCo, a Strategy holding we wrote about in the March quarter, PagSeguro is looking to take market share away from the incumbent acquirers and banks in Brazil as they earn outsized returns for the value they provide to customers. It is estimated that only 30% of micro-merchants currently accept cards. Brazil, like other countries, is increasingly adopting non-cash methods of payment, and PagSeguro is expected to continue to grow its 7% market share in the card acquiring industry (by value). Together with the 1.2% position in StoneCo, which benefits from similar market share gain potential, the Strategy now has +/-2% invested in the Brazilian payment providers covering the small- and medium-sized merchant segments.

The Strategy sold both South African food retailers Shoprite and Spar during the quarter. These were small positions (combined 0.8%) and we felt the opportunities were better elsewhere, such as the new buys above. The most notable sale was that of 58.com, which we had held in the Strategy since late 2016 and was a top 10 stock in the Strategy for some time. 58.com was bought out by a private equity firm, which added the founder to the buyout consortium after its initial bid to secure the support of his high voting shares. We believe the buyout price significantly undervalued the business and was very opportunistic – the share had traded 25% higher than the proposed price as recently as January this year – and we lobbied the board to prevent the founder from exercising his voting rights due to the inherent conflict this represented (as he was both buyer and seller). These actions were not successful and only a nominal increase in the offer price was requested by the board; as a result, we sold the remaining exposure as the share price converged to the new buyout price.

Portfolio managers Gavin Joubert and Suhail Suleman talk about their journey with the Global Emerging Markets Equity Strategy over the last 13 years.

by Gavin Joubert and Suhail Suleman