The Strategy outperformed the benchmark over the quarter. This was largely due to the alpha generated in our local bond and stock selection. The Strategy has performed well against its benchmark and peer group over all meaningful time periods. 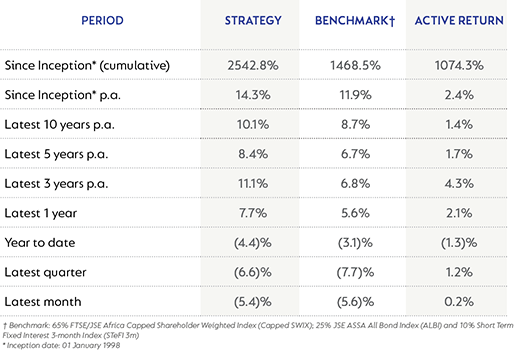 The MSCI World Index declined -16.2% for the quarter (dragging 12-month returns down to -14.3%). The MSCI Emerging Markets (EM) Net Index declined -11.4%, resulting in a year-to-date decline of -25.3%. China fell -13.5% as an extended lockdown in Shanghai undermined the country's economic growth. China stuck doggedly to its zero-Covid policy despite the near-term economic cost. Ineffective vaccines, low vaccination levels in the elderly population (relative to developed economies) and very low community transmission mean herd immunity is low. Given these headwinds, it is unclear whether attempts to stimulate growth will succeed. Russia remained a global pariah given ongoing military hostility in Ukraine. Western allies are broadly united in their opposition to Russian aggression. Energy commodities remain elevated due to trapped Russian supply and limited investment into new sources of production for several years given decarbonisation commitments. For the year to date (YTD), the prices of oil (+47.6% YTD), gas (+45.4% YTD) and coal (+127.6% YTD) have all risen meaningfully.

Inflation continued to surprise to the upside as surging energy prices have exacerbated already high inflation. US inflation hit 8.6% during the quarter. Central banks have responded to inflation with widespread rate hikes. Whether inflation can be contained will depend on the willingness of central banks to hike rates sufficiently to properly dampen demand and slow growth. The Bloomberg Barclays Global Aggregate Bond Index declined -8.3% in US dollars.

South Africa’s (SA) economy has benefited from a strong commodity cycle over the last few years. This has supported better than expected growth and helped to stabilise the debt burden. The Strategy has retained its meaningful exposure to local bonds where we believe their attractive yields (in both nominal and real terms) embed a significant risk premium. The JSE All Bond Index delivered a return of -3.7% for the quarter.

While the commodity cycle has supported the economy in the last few years, we remain concerned about SA’s ability to deliver sufficient economic growth in the long term. A decade of mismanagement has undermined infrastructure, with power and rail capacity in particular constraining the economy. Load shedding has run at record highs YTD as Eskom struggles to generate sufficient power to keep the lights on. At these levels, economic growth will be constrained. Other frustrations include poor educational outcomes (which are failing to produce the skills needed to support a productive labour force) and ineffective policy. A year of campaigning ahead of the ANC’s December elective conference will limit any appetite for reform.

The FTSE/JSE Capped SWIX Index declined during the quarter (-10.6%), giving up first-quarter gains to deliver -4.6% YTD. SA remains one of the better performing markets in 2022, with USD returns (-10.2% for the FTSE/JSE All Share Index) ahead of the MSCI World Index (-20.5%) YTD. Given low starting valuations, we now see SA equities as extremely cheap, with broad value across the resource, domestic and global stocks listed on the JSE. For the quarter, resources returned -20.7%, financials -15.8% and industrials -3.0%.

Major industrial constituents Naspers (+ 42.3%) and Prosus (+32.6%) were up strongly. The market responded positively to the Naspers/Prosus announcement regarding their intention to commence an open-ended buyback programme of Naspers and Prosus shares funded by selling down the stake in Tencent. Coronation had previously urged the board (via a letter) to consider these actions, given the very beneficial impact on net asset value (NAV) per share. The meaningful discount at which NPN and PRX trade to their underlying Tencent investment means that at a per share level, exposure to Tencent is in fact increased through this buyback. Since the announcement, the discount has narrowed considerably in recognition of both the value that this transaction would create and the positive message it sends about management’s commitment to narrow the discount as well as their intention to optimise capital allocation.

Domestic stocks continue to offer attractive stock picking opportunities with their low starting expectations and undemanding valuations (with many trading on high dividend yields too). During the quarter, Remgro made an offer for MediClinic. The JSE has seen several buyouts by international bidders in the last few years, underlining the value on offer.

Our emphasis within the portfolio has been on finding businesses that can prosper even in a low growth economy. Examples of these include RMI and Transaction Capital (TCP). RMI’s core holding is OUTsurance, which offers strong growth prospects, particularly in Australia, and can pay out the bulk of its earnings while growing. With regards to TCP, we expect the WeBuyCars business to continue to gain market share given its convenient and trusted consumer offer. Management is working hard to build a new technology-led platform in the TCRS business to service global clients.

The financials index returned -15.8% for the quarter. YTD trading by the banks (+7%) has shown an ongoing recovery with advances growth across the corporate and retail sectors and low to mid-cycle credit losses thus far. The rate hiking cycle will deliver endowment benefit for the banks. Strong corporate and household balance sheets are expected to withstand the level of rate hikes forecast without any blow out in credit losses. The Strategy has moderate exposure to the banks via FirstRand, Standard Bank and Nedbank. Insurers (-23.1% for the quarter and -10.3% YTD) have seen more challenging trading as the businesses face low growth and competitive pricing in risk at the same time as Covid-related mortalities have inflated claims.

The resource sector declined -20.7% as metal prices broadly retreated off their March highs. European countries have committed to reducing their reliance on Russian energy supply. This is supportive of longer-term goals to decarbonise, but the transition period will be challenging requiring increased supply of oil, gas and coal from other parts of the world. Fossil fuels have already faced several years of low investment given decarbonisation goals. Attracting capital to fund new production is difficult unless there is a willingness to commit to longer offtake periods. Near-term decarbonisation targets are already wavering in Europe. Constrained supply and growing demand are expected to keep energy markets tight.

The Strategy has moderate property exposure, preferring to use its risk budget in equities and bonds. While the sector performed strongly during 2021, it is still negative (-9.2% p.a.) over three years. Holdings are predominantly in the A shares, with some exposure to logistics assets. The medium-term outlook remains subdued as a weak economy and a structural shift in demand from increasing digital engagement and work-from-home trends undermine rental tension. 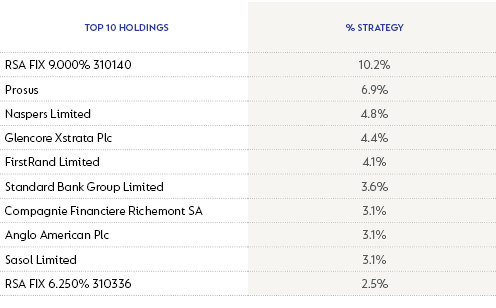 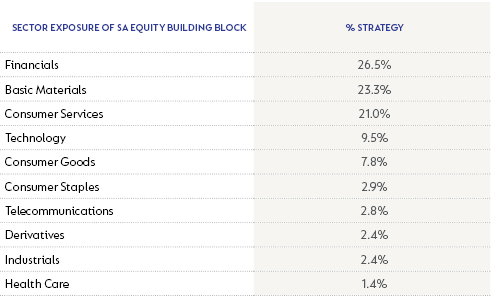 As always, our commitment to long-term investing and disciplined valuation-based approach remains the bedrock of our investment process. While headwinds exist in both global markets and the domestic economy, we believe growth assets are well priced for the risks and offer attractive returns off these low starting prices.