The Rubik’s Cube became the world’s most popular puzzle game ever, with around 200 million units sold in the early 1980s. Solving it required mastery of a set of algorithms, which in turn depended on developing or understanding a notation system. Solvers had to make a trade-off between the speed and simplicity of the solution. This demanded dedication, patience, discipline and focus from the gamer. Most found it devilishly difficult to crack, making a how-to-solve guide the best-selling non-fiction book of 1981. Contrast this with 2017’s defining toy fad, the fidget spinner. Its key redeeming feature seems to be that, being a tangible object, it at least does not require the user to stare at a smartphone screen.

There is unfortunately much to be fidgety about. After another poor quarter, the JSE has now delivered a paltry 3.6% per annum over the past three years. This is an unusually long period of below-average returns which SA investors are not accustomed to. The midnight cabinet reshuffle, which led to a spate of ratings downgrades, has shattered domestic confidence, as Marie Antelme reports. Despite this, the rand strengthened by 3% against the US dollar over the quarter, as foreign investors continued to buy local sovereign bonds. (See Nishan Maharaj’s Bond Outlook for more.) We remain extremely concerned about recent events in SA. Guest writer Simon Freemantle explains the political forces behind the current turmoil.

While rand strength detracted from recent equity performance, the defining feature of our multi-asset portfolios remains full global equity allocations coupled with a core local holding in the high-quality global companies that happen to be listed on the JSE (Naspers, British American Tobacco, Steinhoff and UK property firms).

The UK electorate delivered another shock result at the start of the crucial Brexit negotiations, the US president’s intemperate tweets are slowly shaping a new global diplomatic order and tensions are escalating in the Middle East. Global markets have been moving higher in fits and starts, but a recent sharp sell-off in global bonds, a continuous European banking crisis and a slump in the oil prices have unnerved many. Chinese debt levels also remain a source of concern. The respected emerging market analyst Jonathan Anderson has contributed an exclusive article on China’s prospects. While for the foreseeable future the country should remain stable, Jon warns that investors need to be vigilant of risks in the Chinese economy. China may not escape its debt boom without pain.

We caution investors not to get too despondent, as it may be hazardous to your wealth. Poor local equity returns are causing some investors to abandon the asset class in favour of yielding asset classes (cash, bonds and property), which have outperformed over the past three years. We think this is an error, as in our view bonds are overvalued, while equities offer more value than at any other point in the past five years. As a result, we are for the first time in many years marginally overweight local equities in our multi-asset funds. Investors, like those who managed to solve the Rubik’s Cube, are more likely to achieve long-term success if they remain patient and committed, following the algorithms that have been proven to lead to success.

THE PERILS OF PASSIVE

A notable event during the quarter again highlighted the limitations of passive investing. The index provider MSCI, which many fund managers use to benchmark the performance of their global funds, recently decided to include selected China A-shares in its emerging markets’ benchmark index for the first time. After consultation, 222 shares (out of more than 3 000) were considered suitable for the index. The decision sparked concern among passive investors who have to track the index. The Chinese market is opaque, with questions about ownership structures, shadow finance and the true extent of state involvement in each company. The selected companies are skewed towards the problematic Chinese financial sector. As a number of commentators pointed out, it demonstrated that tracking an index is not a passive investment decision at all.

No matter how artfully the passive sales pitch is presented, all passive investments fundamentally require investors to make an active decision. Investors need to choose from the myriads of indices, many with increasingly complex rules and algorithms, each with a potential materially different outcome over long periods. Passive investing is particularly ineffective in emerging markets such as SA, because our market is so highly concentrated. While US equity investors tracking the Standard & Poor’s (S&P) 500 will end up with a portfolio where the top 10 largest stocks represent less than a fifth of their portfolio, in SA, Naspers alone will represent almost 20% of your portfolio (if you are tracking the Shareholder Weighted Index). One of the biggest selling points of passive investing is that you remove stock-specific risk and simply get the return of the market. In emerging markets, often investors end up with much more single-stock risk, and they do so without a skilled investment professional held accountable for the appropriateness of that weighting.

We recently conducted a survey of our clients. We were humbled by the overwhelming response, with nearly 7 000 investors taking part. We thank you for your time. While the findings were mostly constructive and positive about your experience in dealing with us, it did highlight one concerning issue, relating to potentially overly optimistic return expectations among more conservative investors. Our income and growth funds (Balanced Defensive and Capital Plus) have less exposure to growth assets than our long-term growth funds (Balanced Plus and Market Plus). Given the higher expected returns associated with more exposure to growth assets, it follows that the expected return for long-term growth funds should be higher than for income and growth funds. However, survey respondents in aggregate are anticipating largely similar returns from income and growth funds (11.6% per annum) and long term growth funds (12.4% per annum). Put differently, income and growth investors are expecting returns of around 2% per annum more than we think is a realistic planning input. We will provide more information about setting prudent return expectations in a future edition of Corospondent. 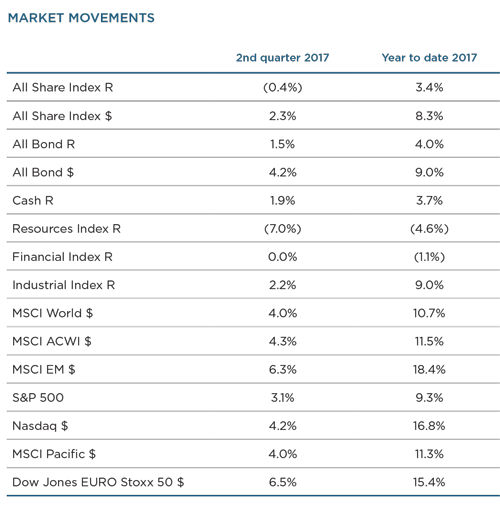