So much has changed. When I wrote about the prospects for the SA economy at the start of the year, I was comfortable that 2017 would, in economic terms, be a lot better than 2016. Relief from the crippling drought would help ease grain prices and provide support for both growth and trade. Falling inflation – especially food prices – should boost real incomes, providing relief for strapped consumers, and while tax increases were always likely, lower inflation raised the possibility of some monetary support for spending. A helpful global backdrop for growth would reinforce improved trade and, taken together, confidence would lift.

Then president Zuma reshuffled his cabinet on 30 March and in the weeks that followed the political landscape changed dramatically. The initial shock of the replacement of SA’s immensely credible finance minister Pravin Gordhan and his deputy Mcebisi Jonas was followed by a series of serious allegations about the capture of key institutions. Public revelations – through leaked emails in the media, as well as in academic work – detailed the degree to which political decisions have been compromised in the interests of a few.

More recently, and most unhelpfully, the independence and mandate of the central bank have been brought into question. Even if these contentions do not pass constitutional muster, the scrutiny politicises an institution which has to date remained above reproach, and justifiably trusted by South Africans and more broadly, financial markets.

And this, really, changes everything. Because the decisions that are now being made by households and businesses are very different to the ones which might have been made before these events. Confidence, at the end of the day, is the engine of growth, and growth is the single most important condition for poverty relief. So, as we look ahead, the outlook for growth in SA is now severely constrained.

GROWING OFF A WEAKER BASE, INTO UNCERTAIN TERRITORY

Already, data published for the first quarter of 2017 were much weaker than expected. Notwithstanding some volatility, relative to the previous quarter, growth contracted 0.7% in seasonally adjusted terms. Because output also declined in the fourth quarter, SA entered a technical recession in the first quarter of 2017. Perhaps more alarming than the weak headline reading was that household spending – typically a pretty solid driver of growth, usually accounting for about 60% of GDP – was the main source of the weakness. 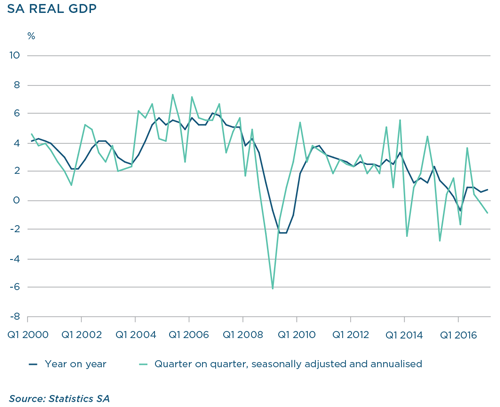 Household spending in real terms contracted by 2.3% quarter on quarter (seasonally adjusted and annualised), after growing 2.2% in the fourth quarter of 2016. Household spending, in turn, is a function of employment, remuneration, changes in tax and inflation (which give us a measure of disposable income), followed by households’ decisions to save or spend what is left (household confidence).

When looking at potential drivers for growth at the start of the year, my assumption was firstly that employment would grow in line with the 1% average of the past couple of years, and that nominal remuneration growth would remain broadly stable at about 7%. With inflation set to fall from 6.3% in 2016 to just over 5%, real income growth should have more than offset the impact of higher taxes on aggregate consumption. 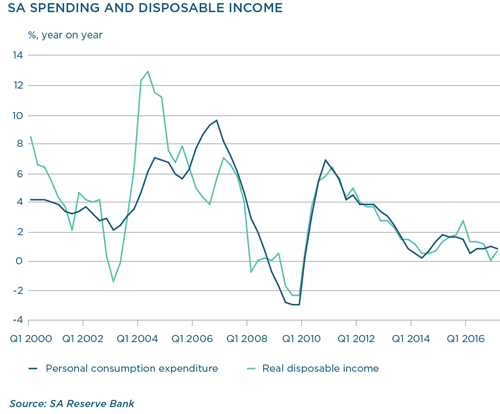 I also assumed that wealthier households, with greater financial resources, would save a little less to consume at the same rate as before, despite the increased outlay to SARS.

What the data, compounded by increased political uncertainty, now suggest is that while real income growth should improve into year-end as inflation eases (the first quarter of 2017 was certainly the worst combination of high inflation, low wage growth and a hit from taxes), households are choosing to increase their savings as confidence deteriorates, rather than spend it. Delayed consumption might not apply only to big-ticket items like fridges or cars, but could filter through semidurable and nondurable goods and into nonessential services too. It also means household spending is likely to remain weak for a considerable period. 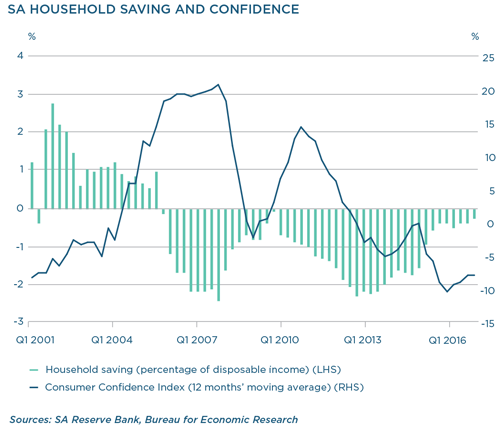 What about other growth drivers? The next biggest component of GDP is fixed investment. The private sector (60% of total gross fixed capital formation [GFCF]) and combined government and public corporations (the remaining 40% of total GFCF) account for just under 20% of GDP. Here too the news is probably worse than it might have been. Private sector investment has been weak for a while, faced by successive headwinds: a combination of low global growth and trade volumes, ongoing strikes in 2012 to 2014, policy uncertainty in key industries like mining and healthcare, and electricity shortages causing capacity constraints. Improved global growth and some support for commodity prices might have eased some of these constraints, but the publication of a new mining charter, which has far-reaching implications for the industry, coupled again with heightened political uncertainty, may see companies invest less than would have been the case otherwise, accelerate offshoring or deferring investment decisions. 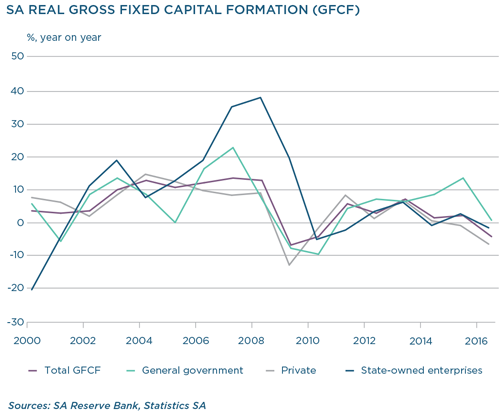 Political uncertainty, the weakening of state institutions and persistently lower growth in the short to medium term now also carry a more sinister risk. Further ratings downgrades will see SA excluded from a large benchmark bond index like the Citigroup World Government Bond Index (WGBI). As things stand, the risk is too close for comfort: WGBI inclusion requires that both Moody’s and Standard & Poor’s hold the sovereign local currency rating in investment grade. Both agencies now have this on the limit at Baa3 (negative outlook) and BBB- (negative outlook) respectively, and both have signalled more downside to come. It seems very likely that a downgrade will happen over the next 12 months, and with index exclusion will come a weaker currency and considerably higher borrowing costs.

This leaves government in an increasingly challenged position. Weak growth will undermine this year’s fiscal targets, and put the medium-term expenditure framework at risk. Debt has risen to over 50% of GDP, and the pace of accumulating cannot slow – unless fiscal measures are implemented to pull the deficit back onto the consolidation path outlined in the Budget. With weak growth, this comes at an even greater cost.

Still, there is a bit of good news. SA’s trade performance is supported by relatively buoyant global conditions, and positive terms of trade will help keep the currency stronger than might be the case otherwise. Inflation has been falling steadily, and should be well below 5% by the end of the year. The inflation outlook for 2018 (annual average of 5.2%) is still favourable. This suggests that real disposable household income, which is now under chronic pressure, should improve. With growth as weak as it is, the SA Reserve Bank (SARB) might see an opportunity to provide some cyclical support too – although even this is likely to be affected by the emerging public debate about the SARB mandate.

What politicians seem at risk of forgetting is that it really is all about growth. Growth is being hamstrung by battered confidence that seems to have trumped a nascent improvement in underlying conditions. Long periods of very low growth become reinforcing: as infrastructure is worn down and inadequately maintained, production processes become inefficient and costly, and profitability suffers. Unprofitable companies retrench workers and disinvest – the economic infrastructure shrinks, people become increasingly unemployable and reliant on state support, and potential growth falls. Lower potential growth implies higher real rates over time, and a weaker currency.