Will politics disrupt the global recovery?

After the last few weeks, it’s hard to know how to think about the outlook for global growth. On the one hand there is a good amount of data showing that global activity – led by the US has picked up after the Q1 malaise, although Europe and Japan have yet to fully recover their lost momentum. On the other hand, an escalation in political tensions, led by but not limited to trade relations between the US and its various trading partners, pose a meaningful downside risk to the improved outlook. To make things more complicated, it is also unclear to what degree the rise in trade tensions may be fueling the escalation in short-term activity, as producers act in anticipation of rising costs, and what this could means for growth, policy settings and asset markets in the medium-term.

At the time of writing the first round of tit for tat tariff increases on a cumulative $100bn between the US and China has been implemented. More importantly, there are clear signs of this escalating. Not only has Donald Trump announced his intention to add a further $200bn on a wider range of targeted Chinese imports, he has also reiterated his threat to impose tariffs on all vehicle imports to the US, with the notable inclusion of the EU. He has criticised the UK’s prime minister Theresa May’s ‘soft Brexit’ proposal and has appeared to criticise US investigative agencies in support of Russian president Vladimir Putin.

Initial estimates of the direct impact of the first round of tariffs was reasonably limited at 0.1ppt of global GDP, while the second round estimates are closer to 0.5% over the next two years according to the IMF. The knock on effect through the disruption of globally integrated supply chains, confidence and the lingering effects of uncertainty could be significantly bigger. While the issues related to trade hold potentially meaningful implications for global growth, the latter create a new paradigm of geopolitical uncertainty, which is hard to assess, but certainly challenges the assumed balance of global power of the past.

As these new dynamics start to play out, global economic fundamentals are reasonably sound. A sustained period of growth has helped stabilise global debt levels (in some cases more than others, with China being the notable exception), visible economic excesses are reduced, labour markets have tightened, and global inflation is starting to reflect this normalisation with policy makers signaling tentative returns to more normal settings on the horizon. For markets the dual and concurrent risk is that either policy normalisation happens faster than current pricing suggests as inflation responds increasingly to strong growth and limited economic slack, or as this happens, growth falters owing to an increase in uncertainty. 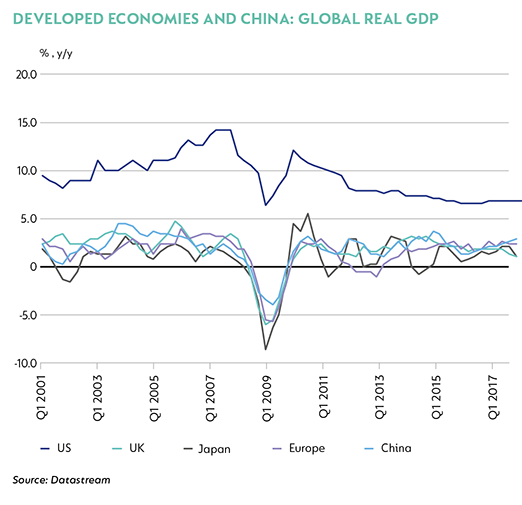 The US leads the pack in terms of both growth acceleration and tighter monetary policy, but with the escalation in political tension it also becomes the epicenter of global growth risk. Fiscal stimulus passed by the Trump government in December 2017 has helped growth accelerate to an estimated 4.8% quarter on quarter (q/q) seasonally adjusted and annualised (saa) in Q2 according to the St Louis Federal Reserve Nowcast model and on average forecasts for the next two years have been revised higher. With the acceleration in GDP growth unemployment has fallen to multi decade lows at just 4.0%. Inflation has also started to rise, and is at or close to the Federal Reserve’s (Fed) target by most measures while wages have started to rise too, suggesting that in the US, the Phillips curve remains relevant. In response the Fed’s Open Market Committee raised the funds rate to 2.0% in June, as widely expected. The post meeting communique showed a median rate forecast by members of another two hikes this year, and three in 2019.

After a disappointing Q1, European activity indicators have picked up moderately. The euro area final composite Purchasing Managers’ Index edged up to 54.9 in June, and German May factory orders and industrial production rebounded after a weak start to Q2. Unemployment in Europe has also fallen in aggregate and is low in Germany at 5%. Against this somewhat more constructive economic backdrop, European political risks have resurfaced. In early June the formation of an Italian coalition government of the two main populist parties La Liga and Five Star with a Eurosceptic common philosophy saw Italian yields spike and raised renewed concerns about Italy’s fiscal viability. The appointment of Giuseppe Conte as prime minister calmed fears while the market awaits the submission of Italy’s 2019 Budget to the European Commission, due by the middle of October. Angela Merkel also faced a home grown crisis with her stance on migration. A compromise agreement was reached at EU level at the end of June. While both risks have retreated, general support for mainstream parties in both regions has waned. On balance, growth should still be above potential at 2.2% in 2018 and about 1.9% in 2019, supported by solid domestic demand, but with downside risk, mostly associated with looming trade and politics. The ECB acknowledged these dynamics by signaling an end to its programme of quantitative easing in Q4, keeping rates on hold at current levels until next summer. 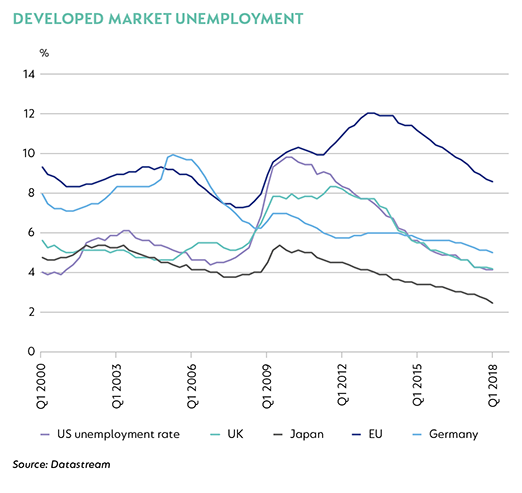 The UK continues a bumpy road to Brexit, with political upheaval weighing on economic activity. Prime Minister Theresa May has faced ongoing internal and external challenges to the Brexit process, most recently with a series of resignations from members of her party. There are few completed milestones to point to which suggest progress is being made, and the risk of either a very strong compromise on Britain’s part or a ‘no deal’ outcome is increasing as the March 2019 deadline approaches. Economic activity has returned to trend like growth, with healthy growth in the services sector, and a strong rebound in construction. A combination of the royal wedding, the hot summer and World Cup soccer are all likely to have a lumpy influence on the data, with early numbers suggesting that services like restaurants have benefitted at the expense of retail activity through the early summer. Unemployment in the UK has also fallen. With a currency and fuel induced surge in inflation (and despite longer-term growth deterioration), after a pause in May, the Bank of England is expected to continue to raise interest rates in August off the very low base in response. Thereafter, weaker growth data and moderating inflation should see the central bank on hold, as pressures from Brexit outweigh global cyclical influences.

In the East, growth in Japan has picked up after the cold weather of Q1 affected output. Capex and construction in particular have recovered meaningfully, but consumption continues to lag. Here too the outlook is mixed: summer bonuses are set to increase to 4.2% from 3.9%, but heavy rains in western Japan may have a prolonged impact on production in the region. Inflation at headline level has picked up, fueled by energy, but core inflation remains very low at just 0.7% in May and points to a central bank on hold at 0% for the foreseeable future. 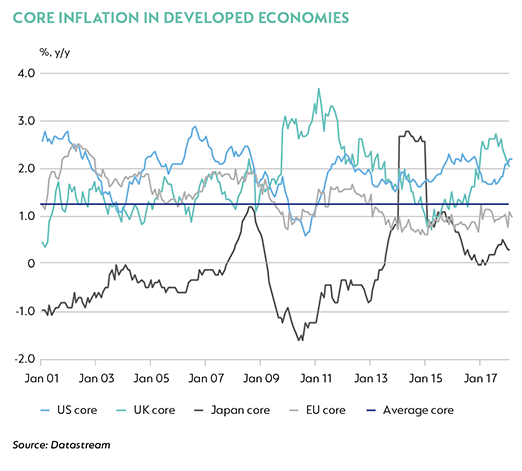 Activity in China has held up well against the headwinds of tightening financial conditions. Policies implemented to moderate credit availability at ‘shadow’ institutions and through irregular structures, as well as efforts to improve credit quality has seen a meaningful contraction in the credit impulse. Activity in most domestic sectors has slowed, led by property and broader domestic industrial sectors. Trade volumes have provided a helpful buffer and GDP in Q2 is still 6.8%. However, the rise in trade protection and pending implementation of further measures which are likely to see retaliation from the Chinese authorities threatens the outlook for growth, and have started to make downward revisions to growth as they count the economic cost of the rise in trade tension.

The impact of these interconnected and at times opposing forces for emerging markets is difficult to disentangle. However, an increasingly dislocated global cycle is hard to manage, and is likely to see risk assets suffer in uncertain markets. Either a steeper rise in developed market interest rates than currently priced by the markets, or an unexpected slowing in growth would be unhappy outcomes for commodity producers, especially those who run large recurring deficits. It is possible that President Trump’s ultimate strategy is to win on his electoral promises and that compromises may be made, alleviating the current high level of tension. But from this vantage point this seems unlikely yet and the consequences are already emerging.