The news cycle has accelerated of late, with one breathtaking event after another. From the UK’s shock and (under prime minister Theresa May) strengthening bid for isolationism, to exploding cellphones and the Mexican peso emerging as the key gauge of who is winning a US presidential debate, abnormal is the new normal.

In SA, the headlines have been equally alarming. Every day brings more shock news of fraud and politicking, as well as scenes of burning universities and protest. The current mood is akin to the social unrest that plagued our country in the years leading to the first democratic elections in 1994.

It sometimes feels difficult to remain optimistic and to keep perspective. Still, ours is a noisy and vibrant democracy, and growing ever stronger. This was demonstrated by the local government elections in August, which delivered historic shifts in support as citizens expressed their discontent.

Fact is, the political and economic noise worldwide will not die down. Some of the developments will have long-term implications and require a recalibration of expectations. But Coronation’s investment philosophy allows us to block out the short-term commotion and single-mindedly pursue the most rewarding opportunities. This has underpinned our meaningful investment outperformance over the long term.

In this edition, we provide an active manager’s response to the massive push toward passive investing over the past five years. Passive investing has created inefficiencies and mispricing in the market, offering opportunities for true active investors like ourselves. No wonder our CIO Karl Leinberger writes in the following article that index rebalancing days are his favourite days in the office.

Still, the fundamental flaws of index tracking as an investment strategy are becoming increasingly apparent. Its sales pitch is based on instant gratification and the need for a known cost, which are taking precedence over the actual goal of retirement investing: to have sufficient income to live on after retirement. That should be the goal, and not the short-term volatility of performance gains against benchmarks or the short-term ranking of returns relative to the outperforming peer funds of the day. But it is not hard to see why investors fall for the sexy sales pitch: with so much information and choice out there, it is difficult to define the real issues and what lies hidden in the marketing spiel.

Karl helps clarify this confusion in his article, and challenges the conventional thinking behind the sales pitch. From the true cost of these products to the integral shortcomings of a passive investment strategy (which forces investors to buy high, sell low), he finds that key realities are often glossed over. This is a must-read for all investors!

As Karl also explains, tracking the index can be hazardous in a concentrated market like SA. Often investors end up with the very antithesis of the passive proposition: single-stock risk. With so few shares dominating the market, many investors are oblivious to the fact that they are dangerously exposed. Elsewhere in this edition, we explore the other problems with benchmarks, particularly in emerging and frontier markets. We have long argued that benchmarks are often not a true and accurate reflection of the investable universe of those countries and their economic drivers, nor the best companies that investors could invest in (at the right price).

The benchmark indices in these markets are typically skewed towards lower-quality companies, which have larger weightings due to their free floats. The head of our global frontiers team, Peter Leger, explains why active, clean-slate investing is a less risky way to access the best opportunities in these markets. We are not concerned with an arbitrary tracking error to flawed benchmarks. Instead, we are focused on avoiding the permanent loss of capital and, more importantly, ensuring that we deliver a rate of return that reflects the risks inherent in the different markets.

In addition to our quarterly contributions on the economy and markets, you will find a number of investment cases in this edition, including for Anheuser-Busch InBev (ABI). Following the SABMiller takeover announcement, our SA strategies were early investors in the Brazilian beer behemoth on the strength of existing coverage and fundamental analysis from our global investment team. Our analysts are frequent visitors to Brazil, and have over the years done extensive research into ABI.

Coronation was recently named the Best Africa Fund Manager at the annual Ai Capital Market Index Series Awards held in New York. We are proud to have received the award three times in the eight years since the inception of our Africa strategies. This, we believe, is testament to the value that has been created for our clients and the success of replicating our proven investment philosophy and process across emerging, developed and frontier markets. The Africa Frontiers strategy is managed by the same team as our Global Frontiers strategy. You can read more about our Global Frontiers strategy in the Fund Factfile.

As many of you may already know, we recently launched an exciting new app that will make the reading of this newsletter more convenient for those of you who are constantly on the move. Now you can access and bookmark our insights and thought leadership pieces anytime and anywhere from your smartphone or tablet. In the next few months you will also be able to download our latest strategy factsheets as they become available. To download our app, simply search for Corospondent in the Apple or Google Play app stores.

We hope you enjoy the read.
​ 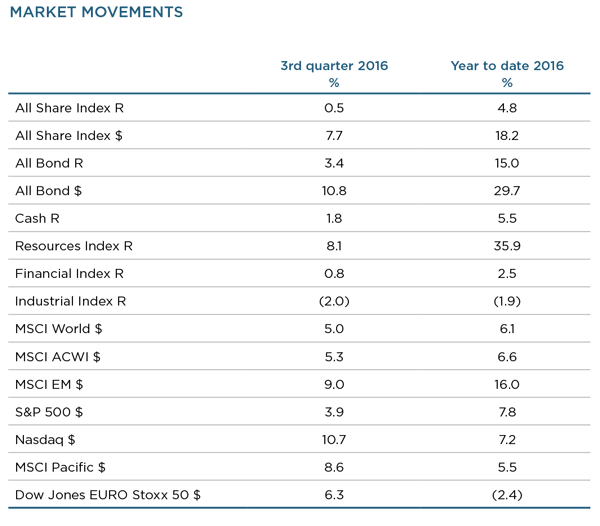