For the third quarter of 2016, the MSCI All Country World Index and the MSCI Emerging Markets Index returned 5.3% and 9% respectively in US dollars. Locally, the JSE All Share Index returned 7.7% in dollars, but rand appreciation (in line with other emerging market currencies) meant that the rise in local currency terms was more muted at 0.5% over the same period. Commodity prices, in general, ended the quarter virtually unchanged in US dollars: oil was down 1.3%, platinum gained 0.3% and copper rose slightly by 0.2%. Notwithstanding the benign moves in commodity prices and strength of the rand, resource shares performed well: the local Resources Index returned 8.1% for the quarter, outperforming industrials (-2.1%) and financials (0.8%). The longer-term divergence in the performance of resources relative to industrials and financials remains significant. Not only has the Resources Index lagged industrials and financials over three, five and ten years, but it has also underperformed cash over these time periods. 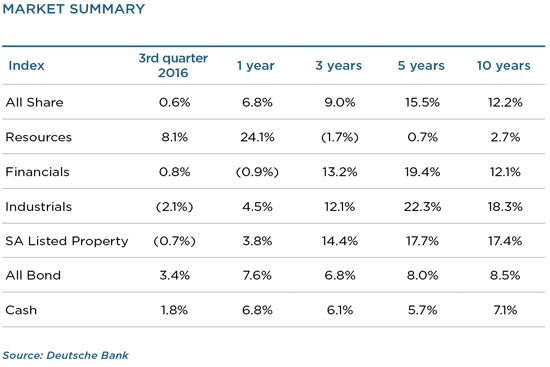 Nearly eight years since the global financial crisis, interest rates remain close to zero in most major economies and even negative in others. The world’s major central banks are committed to maintaining the status quo of unconventional monetary policy. The US Federal Reserve has once again delayed hiking rates, while the European Central Bank and the Bank of Japan continue to apply quantitative easing. Highly accommodative monetary policy represses the cost of capital and serves as a tax on the savings industry. This lack of yield encourages risk-taking as capital scours the globe in search of the best opportunities. This has the effect of manipulating asset prices across the spectrum – equities, bonds, property and currencies – which has resulted in the current disconnect between strong financial markets and tepid growth in most major economies. While monetary policy has succeeded in buoying financial markets, very little of the heavy lifting by way of fiscal and social reform has taken place. While central bankers may have averted the great recession from becoming a depression, they are potentially sowing the seeds for another crisis in the years ahead.

At the time of writing, Theresa May, the UK prime minister, has announced that she will start formal negotiations for Britain to leave the EU by March 2017. Once she triggers Article 50, she will have two years to negotiate a new trade deal with the EU. This has once again rekindled uncertainty, as market participants speculate about the terms of such a deal. This uncertainty is likely to result in central bankers erring on the side of caution and keeping interest rates lower for even longer.

Domestically, economic growth remains subdued with risk to the downside given the backdrop of a weak global economy, instability caused by political infighting and the risk of a credit downgrade to junk status. Recent rand strength has improved inflation expectations and, together with weak economic growth, this means that the SA Reserve Bank is unlikely to hike interest rates further.

We believe domestic equities are moderately attractive. While the JSE All Share Index is near its peak in rand terms, it has basically tracked sideways for the last five years in US dollar terms. This is largely due to 48% of the JSE All Share Index constituents being rand hedges, which benefit from a depreciating currency. We believe the global businesses listed in SA are attractively valued and, as such, our portfolios have healthy weightings in stocks such as Naspers, Steinhoff International Holdings, British American Tobacco and Anheuser-Busch InBev. These businesses are exceptionally well managed and are diversified across numerous geographies and currencies, which make for a robust business model and protect the companies from an earnings shock in any single market.

Resource shares have performed strongly year-to-date as commodity prices recovered. Our funds were well positioned to capture this bounce, given our reasonable weighting in resource shares. Notwithstanding the recent outperformance, we believe resources remain attractive based on our assessment of fair value. However, given the vagaries around currencies, commodity price moves and Chinese demand, one has to manage these risks by ensuring that the weighting in our respective portfolios is sized appropriately. Our preferred holdings remain Mondi, Anglo American and the low-cost platinum producers, Northam and Impala Platinum. SA gold and platinum miners both face enormous challenges and cost pressures (such as real increases in electricity tariffs and labour costs without the corresponding gains in productivity). The SA platinum producers mine approximately 70% of the world’s platinum supply. This affords them pricing power. Metal prices will have to adjust higher to reflect these cost pressures in order to incentivise platinum miners to expand production to meet demand.

The same is not true for gold. SA mines a tiny portion of the world’s gold supply; the world does not need our gold. This means that SA gold miners are likely to absorb these cost pressures, adversely affecting their profitability. Prior to the recovery in the gold price, SA gold miners faced enormous pressure; balance sheets were under immense strain and many were either facing a rights issue or closure. This prompted management to run these businesses for cash – production was high graded (at the expense of the life of mine) and exploration capital expenditure was culled. While this is good for near-term cash flow and profitability, it is negative in the long term. Mines face a declining production profile – if they do not replace production (by sinking new shafts, as an example), unit costs will eventually blow out as lower production is spread over a similar fixed-cost base. This will be detrimental to profitability. We thus remain negative on SA gold miners.

Given the weak domestic economy, it will be a challenge for the average business to defend (let alone grow) earnings in real terms. In such an environment, high-quality businesses thrive and take market share from the weaker ones. To this extent, we hold reasonable positions in food retailers and producers as well as selected consumer-facing businesses (Foschini and Woolworths). These businesses enjoy pricing power, are well managed and trade below our assessment of fair value.

Banks returned 10% for the quarter, outperforming the broader financial index. While banks are effectively a geared play on a weak domestic economy, we believe that this is more than discounted in the current share prices. Valuations are attractive on both a price-to-earnings and price-to-book basis. These businesses are well capitalised, well provided for and trade on attractive dividend yields. Our preferred holdings are Standard Bank, Nedbank and FirstRand. Life insurers returned -1.5% for the quarter. Our preference remains Old Mutual and MMI Holdings, both of which trade on attractive dividend yields and below our assessment of their intrinsic value.

Listed property returned -0.7% for the quarter. We expect domestic properties to grow distributions at levels close to inflation over the medium term, even if one assumes an uptick in tenant vacancies. This real growth, combined with a fair initial yield, offers an attractive holding period return. We continue to hold the higher-quality property names which we believe will produce better returns than bonds and cash over the long term.

In a low-growth, low-yield environment, equities remain our preferred asset class for producing inflation-beating returns. We prefer global to domestic equities on the basis of valuation and remain at the maximum 25% offshore limit in our global balanced funds. We believe the current rand/dollar exchange rate to be fairly valued. At times, when we believe the rand to be oversold, we will lock in currency weakness by using futures, without physically selling global equities.

In conclusion, financial markets are fraught with uncertainty as investor sentiment reacts to the news of the day, which causes asset prices to gyrate. During these choppy markets, our long-term time horizon and valuation-driven investment philosophy act as a compass, allowing us to navigate through the noise and make the correct decisions for the benefit of our clients.