“Life isn’t about waiting for the storm to pass … It’s about learning to dance in the rain.” – Vivian Greene

SA started 2017 with such promise and exuberance, as underlying drivers of the local economy entered a cyclical upswing amid what seemed to be a much calmer and supportive political landscape. In addition, the global backdrop had become (and remains) supportive of emerging markets, with the adherence of the US Federal Reserve (Fed) to a gradual path of rate normalisation, continued monetary policy accommodation on the European continent and a more upbeat overall growth outlook, driven primarily by cyclical upswings in China and the US.

The SA 10-year benchmark bond traded below 9% for most of the quarter (supported by a rally in the rand to below R12.50/$), grinding steadily towards a low point of 8.25%. Unfortunately, this rally was short lived as political events in the last week of March caused major reversals in the rand, local bond yields and sentiment towards SA.

The All Bond Index (ALBI) returned 0.4% in March, 2.5% for the first quarter of 2017 and 11% over the last 12 months. The 12-year and longer range of the bond curve was the biggest contributor to this performance, due to its greater than 60% weighting in the index. Inflation-linked bonds (ILBs) have continued to perform poorly, returning -2.15% in March, -0.5% for the quarter and 3.4% over the last 12 months. This was due to very high initial levels of implied breakeven inflation (6.5% to 7%), which necessitated a move higher in real yields, as the 12-month to 18-month inflation average and profile moved considerably lower (towards 5%). ILBs now trade at approximate real yields of 2.3%, which are much cheaper than previous levels and although they do not scream value, they warrant consideration for inclusion in a bond portfolio.

Over the last two years, SA assets have been on a rollercoaster ride, with local headline news adding to the volatility of asset prices. Markets have the ability to administer lessons that every investor, regardless of experience or expertise, should pay close attention to. Over the recent past, two lessons in particular have stood out and echoed the key principles of Coronation’s investment philosophy. First and most importantly, valuation is the only true objective guide one has when it comes to investing. Secondly, trying to forecast macro events is a job best left to those highly intelligent and talented individuals who write comic books that turn into blockbusters.

The events of 9 December 2015 (Nenegate) took both markets and the country by surprise. Ever since, all eyes have been on the machinations and actions of the reformist camp in their battle against the tenderpreneurs. An astute and logical individual following these developments would have naturally drawn the conclusion that there had been a very large reduction in the ability of the tenderpreneurs to launch an attack against the reformists. More importantly, the progression of events over the last 15 months had suggested that, if the attack were to materialise, it would spell an almost immediate end to the tenderpreneurship faction.

The cabinet reshuffle on 30 March 2017 and the events that have followed unfortunately suggest the direct opposite to any such conclusion. This is a clear illustration of how difficult it is to attempt to predict macropolitical events – and more importantly, how basing investment decisions on expectations around certain key outcomes is tantamount to investment suicide (a lesson further reiterated by Brexit and the surprise election of Donald Trump as US president last year).

The margin of error in forecasting can be very large, which means that when you are making a decision on whether to buy or sell an asset (in this case, SA government bonds), you have to ensure that the price you pay for that asset provides a sufficient margin of safety against forecasting error and short-term volatility. In the same breath, however, you cannot purely rely on a single measure of value to determine the attractiveness of an asset. Rather, you must utilise a few methods to validate a cheap valuation signal.

The simplest way to determine the fair value of an SA government 10-year bond is to construct it as a function of global risk-free rates, inflation differentials and a country-specific risk premium:

We have applied a level of conservatism to all the variables listed above, especially to SA inflation expectations, where 6% is the top end of the inflation band and significantly above our estimates of average inflation over the next two years (5.35%). However, SA’s risk premium is the most questionable variable. In the case of further political interference and policy inaction, is it representative of a sufficient margin of safety?

As illustrated in the graph below, SA’s sovereign spread has not changed significantly post the recent credit rating downgrades from Standard & Poor’s (S&P) and Fitch, as it was already pricing in subinvestment grade status. 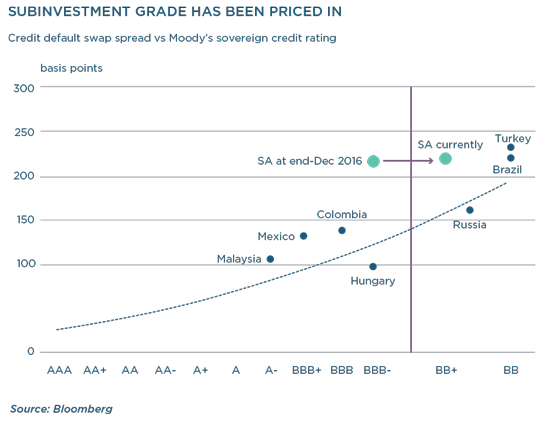 However, the more important question is how distressed the sovereign spread may get in the event of significant stress. The following graph shows the spread between SA’s sovereign spread and a grouping of BBB-rated countries (countries with BBB+, BBB and BBB- ratings), to provide more context on the assumptions used in our calculation above (currently 80 basis points [bps]). Two key stress areas to take note of are the period in December 2015 (Nenegate; spread of 140 bps) and the period before 2000, when S&P and Fitch had upgraded SA to investment-grade status (the average spread during this period was 180 bps). 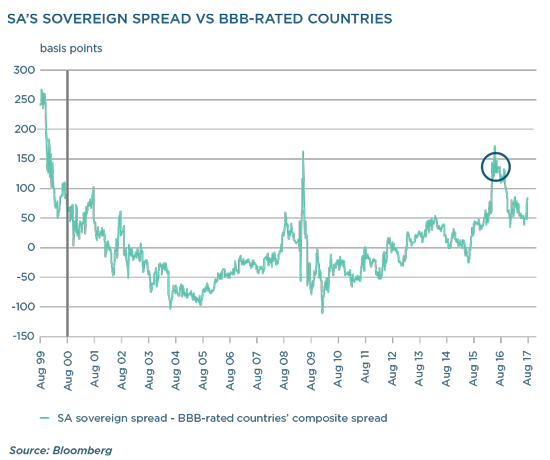 This suggests it is reasonable to expect that the current sovereign spread would need to reprice between 60 bps and 100 bps higher if the economy were to experience significantly more stress – that is, move further away from the underlying fundamentals of an investment-grade economy. Plugging in a sovereign spread that is 60 bps to 100 bps wider suggests a fair value of SA government bonds of 9.5% to 9.9%, significantly above the current level of 9%.

In the following two valuation metrics, we compare current yield levels to levels experienced during Nenegate, both from a real yield perspective and as a spread to US 10-year bonds, as this is the closest episode in our history that bears semblance to the current political landscape. SA inflation has averaged 5.8% since the start of inflation targeting in the early 2000s, and we use this as an assumption to strip out the implied 10-year real interest rate. The current level of 3% does not compare favourably to the 3.75% average between December 2015 and February 2016. In addition, when calculating the spread between current SA 10-year government bond levels and US 10-year bond levels over the same period, the current level of 670 bps is much lower than the range of between 740 bps and 750 bps reached during the Nenegate period. On both these measures, the fair yield on the SA 10-year government bond should be around 9.7% to 9.8% given the current backdrop – 70 bps to 80 bps higher than current levels. 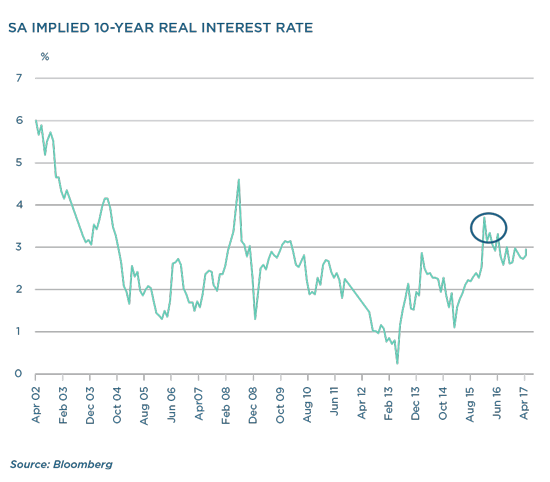 ILBs are an important consideration in any fixed income portfolio, as they provide an element of protection if yields sell off due to deteriorating inflation expectations. This is because their principal amount is scaled according to the inflation rate, and therefore coupon payments are too.

There are a few key considerations when it comes to valuing ILBs: 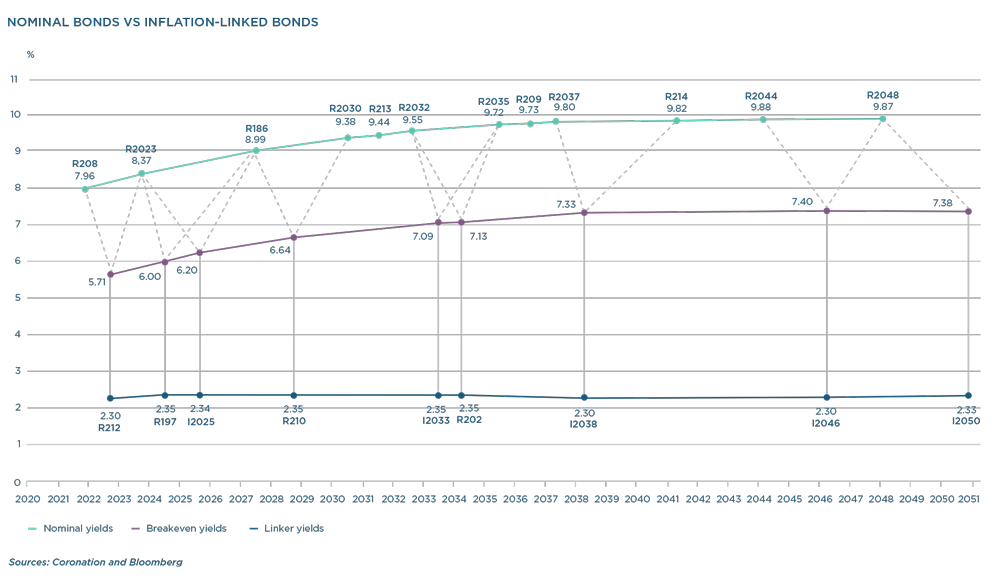 The current local backdrop remains challenging. Despite cyclical factors turning supportive of the local economy, the political landscape has once again soured, bringing into question the ability of policymakers to take the hard decisions necessary to implement much-needed structural reforms. In addition, ratings agencies have already started to move SA down a path into subinvestment grade from both a local and foreign currency perspective, further souring sentiment towards SA assets. SA’s inclusion into the Citi World Government Bond Index relies on our local currency debt being rated as investment grade by both Moody’s and S&P. S&P currently has SA one notch above investment grade, while in the next month it is very likely that Moody’s will take a similar position. The continuation of the current status quo will inevitably lead to further downgrades of SA’s key metrics. More specifically, growth will come under severe pressure as optimism – and hence investment into the economy – will continue to slow. A downgrade to subinvestment grade on our local currency rating would trigger mandated selling of SA government bonds to the tune of between R100 billion and R120 billion. That would be in addition to natural government issuance of R190 billion – R290 billion to R310 billion of net selling in a single calendar year!

Increased foreign participation in the local market has been limiting the sell-off in the SA government bond market, as foreign participants have purchased almost R25 billion worth of SA government bonds year-to-date (the majority in the week following the cabinet reshuffle). The foreign reaction has been based on the supportive global backdrop, and hope of a turnaround based on the recent experience in Brazil (following the impeachment of Dilma Rousseff as president and the consequent rally in Brazilian assets).

As a South African, I remain hopeful that the turnaround in SA will be as quick and energetic as in Brazil, but realistically one has to be honest in the assessment of the current context and circumstances in SA.

Firstly, the Brazilian government was a coalition government made up of equally strong parties that broke up their alliance in retaliation to the president’s wrongful actions. Secondly, unemployment in Brazil more than doubled in a very short period (from under 5% to 10%), which caused mass protest and public outcry, further intensifying calls for the president to step down. In addition, foreign ownership of the local debt market in Brazil was under 15%, given the string of taxes that had been implemented previously to limit hot money flows into the country, and government bonds were trading at double-digits yields of 13% to 14% (implied real yields of more than 6%). From start to end, the Brazilian real weakened almost 40%, and bonds sold off 300 bps to 400 bps in the lead-up to the final impeachment.

SA has a one-party government, an unemployment rate that is already in double digits but has not deteriorated further significantly, foreign local debt ownership of already close to 40% and local debt that still trades in single digits. Therefore, key differences exist that will cause the turnaround process to stretch on for a bit longer – meaning that valuations, although cheaper now, could get a whole lot cheaper.

The current environment warrants a certain degree of caution when assessing the valuation of SA government bonds. Despite the cyclical upswing that the economy is undergoing and the supportive global environment, political uncertainty could derail an already precariously fragile local recovery. In addition, current valuations of SA government bonds, although closer to fair value, are still some way away from offering a sufficient margin of safety in their reflected yields, especially if a downgrade of the local currency debt rating becomes more of a concern.

We are therefore more cautious in our approach to SA government bonds, and would need to see a further widening from the current levels of 9% to above 9.5% before committing in a meaningful way to the asset class.