The growth asset classes produced below-average returns in 2016. While this may make it more difficult to stay the course, a long-term commitment to your chosen investment strategy remains the best way to optimise outcomes over meaningful periods.

Humanity would not have been able to become the dominant species on earth without an innate sense of optimism. The belief that things can be better is the primary driver of progress, and justifies why the capitalist system has become the chief and most efficient form of economic organisation. After all, if investors did not have the hope of receiving an inflation-beating return when committing to a long-term investment, there would not be much point to the existence of financial markets. Most of the time, this optimistic expectation is matched by reality. The SA equity market rewarded investors with a positive real return (of, on average, inflation +7%) around 90% of the time over all possible five-year holding periods since 1930. (Incidentally, the historical success rate over this holding period largely explains why the minimum recommended investment term for long-term growth funds is five years.)

Part of the justification for the higher expected equity return is a reward for accepting the risk of uncertain outcomes, especially over the shorter term. Since 1930, local equities failed to beat inflation over one-year holding periods for one out of every three years. Unfortunately, 2016 was one of these years, with a 2.6% return from the FTSE/JSE All Share Index, compared to CPI of 6.4%. More unusually, it was also only the second time in the last two decades that the local share market failed to beat local inflation for two consecutive calendar years.

A key contributor to the weak equity performance in 2016 was rand strength, as more than 50% of the JSE’s earnings have rand-hedge qualities. This also impacted returns in our flagship multi-asset funds, such as Balanced Plus, Capital Plus and Balanced Defensive. In addition to local equities, these funds all typically hold between 20% and 25% of their portfolios in offshore assets to diversify risk. After a lengthy period of devaluation (the rand lost nearly 60% of its value in the five years to the end of 2015), the rand gain against the US dollar in 2016 (+13%) exceeded the healthy dollar return of global equities (+8% for the MSCI All Country World Index).

The markets therefore delivered a short-term result that is challenging the optimistic expectations of investors in our multi-asset funds. It is understandable that this outcome may be disappointing, especially for newer investors who made their initial investment during the past two or three years. While as investors we do not have any direct ability to influence the outcome of uncertain market-defining events, we do have the ability to define our response to a period of below-average outcomes. Pessimism may triumph, resulting in capitulation and wholesale changes to our portfolios. Alternatively, we can defer our optimism to a more meaningful holding period, because we understand that linear extrapolation of recent experience is rarely sensible in a cyclical system influenced by actors who often become more depressed or more euphoric than justified by reality. Staying the course has historically been the right choice, with strong performance recoveries after disappointing periods for local equities in 1997 to 1998, 2000, 2002, 2007 to 2008 and 2011. As should be clear: we continue to believe that equities will deliver positive real long-term returns, and remain committed to our disciplined, valuation-based investment approach, building the best portfolios we can on your behalf. We continue to find attractive opportunities that should add value over time, as you can read elsewhere in this Corospondent.

Another reason to be circumspect about reading too much into short-term performance numbers is that base effects can play a big and misleading role. The end of 2015 and early 2016 was an abnormal period, as market participants digested the implications of Nenegate (or ‘9/12’) and the subsequent reappointment of Pravin Gordhan as finance minister. Sell-offs and recoveries in different asset classes happened either side of the arbitrary calendar year cut-off point. A pertinent example is the difference in behaviour between government bonds and listed property in January 2016. While bonds recovered strongly (+4.6%) after a very weak December, property declined (-4.5%) after a relatively better December. This timing difference explains why bonds outperformed SA property by 5% in 2016. If you roll the evaluation window forward by only five trading days, the outcome is materially different, with property beating bonds by more than 1% over the 12 months to 10 January 2016. These base effects can materially amplify or depress performance over specific snapshots of time, making short evaluation periods a poor basis for decision-making in long-horizon investment portfolios.

Also note that, despite the below-average returns from markets over the last two years, returns over periods of five years and longer still reflect the expected reward for risk (with annual real returns of between 4% and 7% for our flagship multi-asset funds).

Our flagship funds generally had a good year, relative to benchmarks and competitors.

Most Coronation funds performed better than – or at worst, in line with – their respective average competitor fund over 2016. Some of our long-held views produced strong returns over the year. For example, we benefited from a significant recovery in mining shares and saw emerging market equities perform better than developed market equities. This contributed to healthy active returns for our SA equity funds (such as Top 20) and for our directly managed global funds (including Global Managed, Global Capital Plus, Global Equity Select and Global Emerging Markets). While our multi-asset funds benefited from the same views, positions in UK assets were negatively affected by the Brexit fallout, and an underweight holding in local government bonds cost us some return relative to benchmark. This explains why our multi-asset funds are typically in line with, rather than ahead of, their average peers over the year. Our fixed income funds, including Strategic Income, continued to produce very competitive returns in 2016. All our flagship funds have highly compelling track records over the more meaningful holding periods of five years and longer. You can read more about practical pointers for 2017, or refer to the fact sheets and commentaries published on www.coronation.com for detailed performance information and outlooks for your fund or funds. 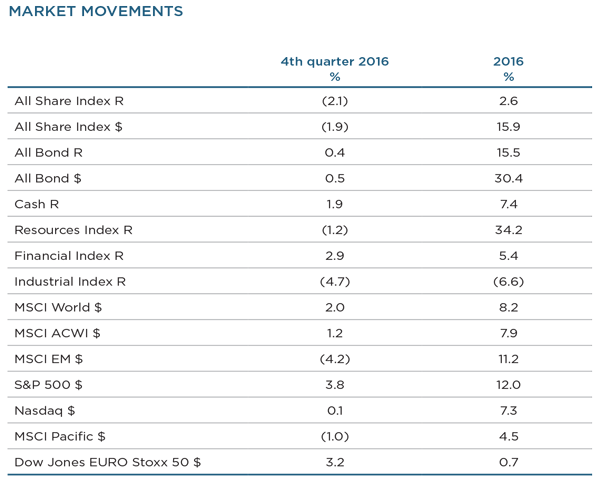