Netflix’s scale, ongoing product innovation and strong execution set the company up well for sustained leadership in an industry that continues to shift online at accelerating pace.

NETFLIX BECAME AN essential part of the ‘lockdown survival toolkit’ globally, and the pandemic resulted in somewhat of a demand ‘pull forward’ that saw the company add a record number of subscribers in 2020. The inevitable post-lockdown normalisation of subscriber additions – about which the market has grown obsessed – and a general weakness in long duration stocks has provided us with the opportunity to add to our holding this year. We see Netflix as the long-term winner in a streaming market with significant structural tailwinds; and, while we acknowledge that Netflix’s hyper growth days are behind us, we view the market’s concern regarding saturation as misplaced. We review the investment case below.

Most readers will be aware that Netflix is the global leader in paid on-demand video streaming, but the company did not just arrive here by chance. Rather, it has been a more than 20-year  journey of constant innovation and improvement, with a number of big and bold pivots along the way. Netflix launched in 1997 as a DVD-by-mail rental company, only to disrupt itself when it shifted to a streaming model in 2007, many years before its now competitors. This was a bold move but one that has paid off, with streaming emerging as the winning long-term model for content consumption.

We rate Netflix’s founder-led management team extremely highly and believe that its unique culture – one of performance, idea sharing and transparency with limited ’rules’ but within a clear set of values – sets the company up for continued innovation. Management has set the tone for a company that is built to win. Its second key strategic shift was its move to produce its own content in 2013 with the launch of its first Netflix Original (House of Cards); this raised the quality of the business and deepened its moat. Figure 1 shows that Netflix Originals accounted for six out of the 10 most searched TV shows in 2021, highlighting the success of this initiative. In more recent years, we have witnessed pushes into animation and films, and, most recently, into gaming. Execution has been exceptional thus far, and Netflix has the potential to develop into a modern media company leveraging its IP across multiple consumer touchpoints. 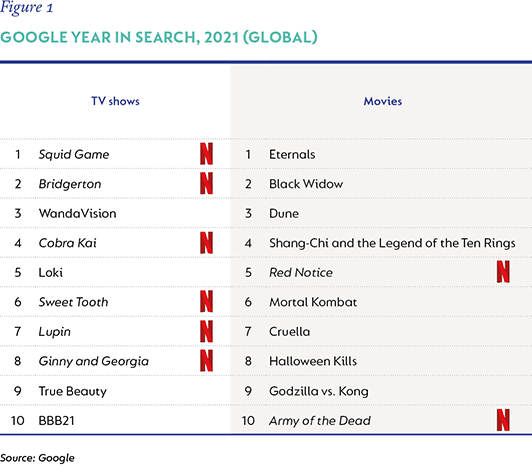 Netflix’s ascent and scale has forced traditional media companies to react, with a string of consolidation including Disney’s acquisition of Fox, the merger of Viacom and CBS, and the imminent merger of Warner Media and Discovery. All contenders want to emulate Netflix, but these competitors face the unenviable task of managing declines in their legacy TV networks while investing in a new streaming product, with some being very late to the party. In our view, Netflix is best placed to maintain its position as the go-to streaming platform for the average household that is likely to subscribe to more than one service (Figure 2). 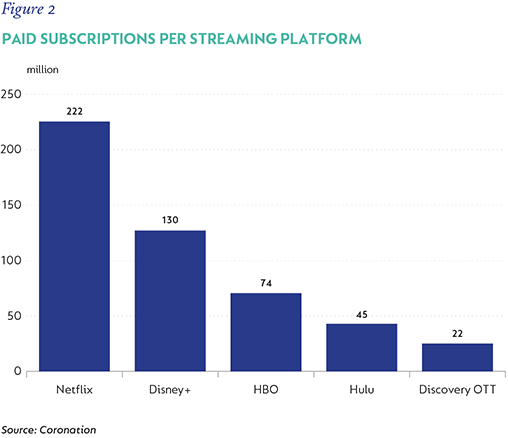 For many consumers, the choice of subscription service is what to subscribe to in addition to Netflix, which, ultimately, wants to be everything to everyone. To this end, it offers an unrivalled selection of internally produced shows and movies right across the quality spectrum, from The Crown to Tiger King and everything in between. Netflix has managed to balance quantity (Figure 3) and quality, with the company receiving the most Emmy and Oscar nominations in 2021. 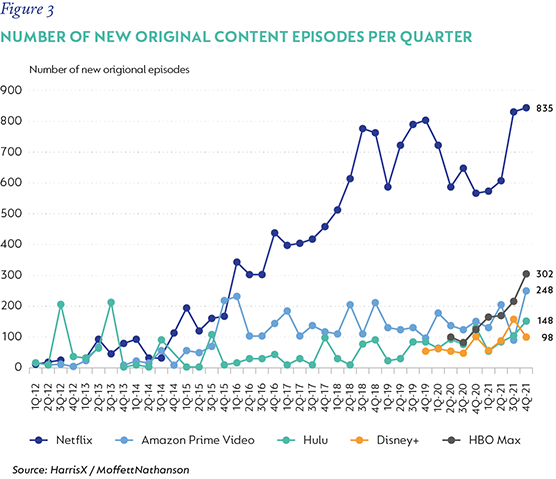 Netflix has direct relationships with all its 222 million subscribers, which is unprecedented in the history of television, where content and channels traditionally reach end consumers via middlemen such as DSTV. This combination of leading scale and customer data enables Netflix to attract the best talent, produce the most relevant shows, and leverage this investment across a global consumer base, in what has become a very powerful virtuous circle.

Importantly, Netflix can also influence discovery and has the ability to create hits from unexpected places. This is both extremely powerful to aspiring talent, as well as beneficial to its own financials. Squid Game is a famous recent example of a massive success seemingly coming out of nowhere. The series, which was produced in Korea and cost a small fraction of what it would cost in the United States, was Netflix’s biggest show of 2021 and has catapulted previously unknown actors into the limelight. Netflix has the platform to create global hits, and creators know this. Further examples are Cobra Kai, which was an absolute failure before Netflix picked it up (Figure 4) or Drive to Survive, which has been a resounding success and resulted in a significant improvement in Formula 1 ratings in the United States, an important growth market that the sport has historically struggled to crack. The list goes on. 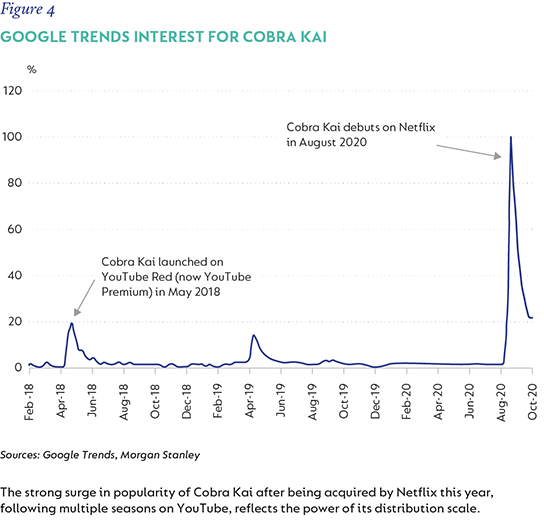 Netflix has proven that content does travel, with foreign language shows such as Squid Game, Money Heist, Narcos and Lupin all being among their most successful. The company has a significant early lead in producing and procuring non-English content.

STRONG INDUSTRY TAILWINDS – A BETTER PRODUCT AT A LOWER PRICE

On-demand viewing is a better customer experience at a lower price than traditional television, and we see evidence of this around the world, where consumers are voting with their feet. We expect this to continue. In Netflix’s home market of the United States, traditional pay-TV subscribers have declined by around 30% since 2013 but still number almost 70 million, which means that 55% of US households still choose to pay $90+ per month for a traditional pay-TV bundle. Staying in the US, Netflix only accounted for 6% of total TV time (Figure 5). The above datapoints indicate that, even in Netflix’s biggest and most mature market, it still has a fair amount of room to grow as consumption continues to move online and on-demand (for everything but sports) and the traditional pay-TV bundle continues to crumble. 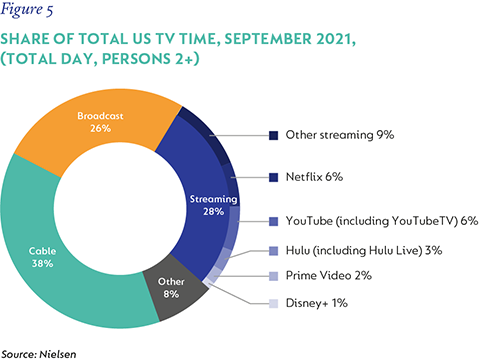 In most countries around the world, Netflix has significantly more scope to grow its subscriber base. Per JPMorgan estimates, there will be over 950 million broadband enabled homes outside of China by 2025. Netflix’s current subscriber base (Figure 6) represents less than a quarter of this opportunity. 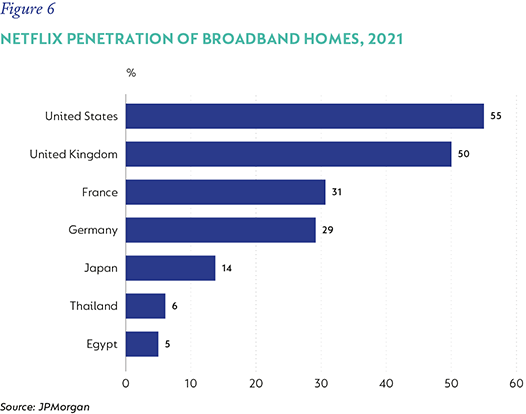 Netflix generates highly recurring, subscription-based revenues and has significant pricing power as it provides consumers a large value gap, meaning it provides much more than what it takes. The company is hyper focused on customer satisfaction and chooses to take price increases only when it has added more value. As more content has been added over the years, we believe that there is substantial pricing power going forward, with standard plans in South Africa (R159 per month) and the US ($15.50 per month) costing less than one fifth of a traditional pay-TV subscription.

Significant content has been added, from unscripted reality TV to animation and movies. The latter initiative is noteworthy; one movie a week was added in 2021 (at no additional cost), including big-budget blockbuster originals such as Red Notice and Don’t Look Up. This represents substantial value to the consumer.

Netflix’s latest foray is into videogames, where games will be added at no extra cost. While this initiative is in its very early stages and is expected to move slowly, the management team thinks long term and recognises the increasingly important role of gaming, especially among younger consumers. This fits squarely with Netflix’s objective of adding more content to drive engagement, and, while we don’t explicitly forecast this opportunity, we believe it is likely to add value over the longer term.

Over the past five years, Netflix has grown revenue and operating profit at a compound annual growth rate of 27% and 75%, respectively. While we acknowledge that Netflix will not grow at this pace going forward, we still expect very healthy growth based on its position in a large and growing market.

We expect revenue to comfortably grow at a low to mid-teens rate over our forecast period, driven by rapid subscriber growth in newer markets and a balance of reasonable subscriber growth and substantial pricing power in more mature larger markets like the US and the UK. Netflix already spends a whopping $17.5 billion annually on content, and there is a substantial opportunity to expand operating margins, as this spend is leveraged off a growing user base. We have never before seen a video platform with Netflix’s scale and direct customer relationships, and we expect it to at least match the operating margins enjoyed by channel owners in the traditional pay-TV market. Putting this all together, we expect earnings per share growth to be in excess of 20%, improving cash conversion and rapid de-gearing over our forecast period, resulting in very attractive potential annual returns.