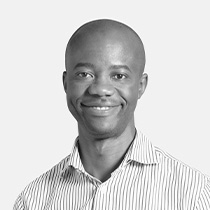 Godwill Chahwahwa is an analyst and portfolio manager with 18 years of investment industry experience.

International Financial Reporting Standard (IRFS) 16 is an accounting standard that came into effect from 1 January 2019 and sets out the principles for the recognition, measurement, presentation and disclosure of leases. It replaces International Accounting Standard (IAS) 17 under which leases were categorised based on whether the lease substantially transferred all the risks and rewards incidental to ownership (i.e. finance lease) or did not (i.e. operating lease). The accounting treatment of operating leases differed significantly from that of finance leases, with operating leases only bringing in an operating lease charge through the income statement, while finance leases required the inclusion of both the assets acquired and the liabilities incurred on the balance sheet.

IFRS 16 harmonises the accounting treatment of all leases*  by removing the differentiation between operating and finance leases. The Standard requires that for all leases, a right-of-use asset and a corresponding lease liability are raised on the lessee’s balance sheet at lease inception, and that subsequent to this, a depreciation charge on the right-of-use asset and an interest expense on the lease liability are recognised annually through the income statement. Figures 1 and 2 summarise the differences in accounting treatment for leases under IAS 17 and IFRS 16 for a sample 10-year lease, escalating at 6% p.a. 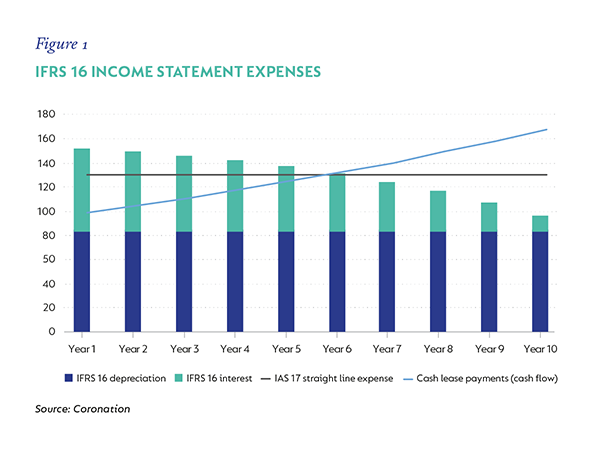 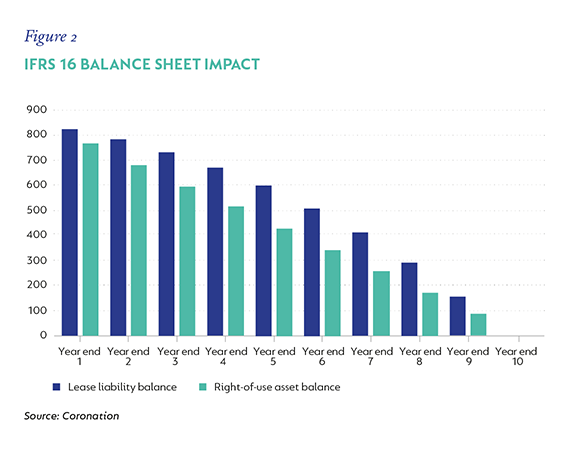 Under IAS 17, an airline (A) opting to purchase its aeroplane fleet would reflect a large balance sheet incorporating the acquired aeroplanes as assets as well as the debt incurred to pay for them as a liability. If a second airline (B) opted to lease their aeroplanes, its balance sheet would not reflect either the asset or liability associated with its aeroplane commitments, but would simply show the annual lease charge in its income statement.

This gave rise to significant off-balance sheet liabilities for airline B, which made direct comparability of these two airlines’ financial reports very difficult. Often, the analysis of asset-heavy companies required an estimation of these liabilities using the additional disclosure notes to the financial state­ments to adjust their balance sheets and derive a more comprehensive view of their underlying leverage.

IFRS 16 tries to address these challenges by bringing onto the balance sheet the right-of-use asset associated with the leased assets, as well as capitalising the obligation to make lease payments into a lease liability. While the Standard is applicable to all organisations with leases, it is most relevant for asset-heavy industries like airlines, shipping and transport, where the under­lying leased/owned assets are the main drivers of the business model and earnings.

Unfortunately, there are some unintended conse­quences arising from the Standard. We believe it misrepresents the financial position of asset-light business models and can distort the earnings bases of some (but not all) companies. The retail sector, while traditionally an asset-light model, tends to have significant exposure to property leases and is therefore also materially impacted by the new Standard.

WHAT ARE THE MAIN CONSIDERATIONS WHEN APPROACHING IFRS 16?

Complexity. The Standard introduces significant complexity for both the compilers and users of financial statements. For companies drafting financials, all contracts that qualify as leases have to be identified; then all the detailed infor­mation on all their leases (the lease term, expiry, renewal/termination options, escalations, implied interest rate and so on – think of a retailer with>2 000 stores) has to be collated as inputs that are used to derive the present value of lease liabilities and right-of-use assets.

Each lease is assessed for impairment annually and an adjustment is made to the right-of-use asset. In an effort to reduce this operational complexity, the Standard allows for the exclusion of low value (<$5 000) and short-term (<12 months) leases. From an investor perspec­tive, the complexity comes in understanding the impact of IFRS 16 on the reported financial state­ments over the lifespan of a business. To contextu­alise this, Figure 3 shows the differences between the IFRS 16 total charges (depreciation + interest) and an IAS 17 straight-line lease expense for a business made up of a portfolio of 10-year leases during three phases, namely rapid growth, stable and declining. 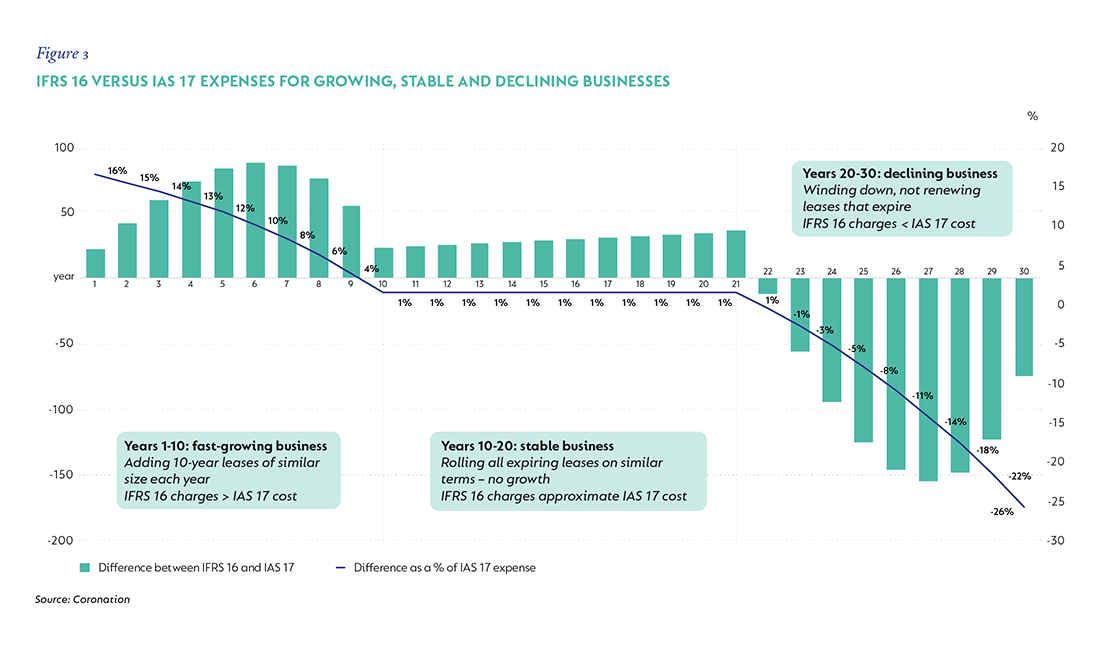 Our observations include the following:

IFRS 16 increases the divergence of the total income statement charge (depreciation + interest) from actual cash lease payments made, particularly at the start and end of a lease. This has important implications for our assessment of the quality of earnings reported by a company. A company whose reported earnings closely mirror cash generated is of higher quality and better able to support dividends and capital expenditure than one where cash generated is significantly lower than reported earnings.

The maturity of the lease portfolio deter­mines the extent of IFRS 16’s impact on income statements. A business at the early points of its lease profile will suffer a more significant hit to earnings as a result of the much higher IFRS 16 charges than one that is either closer to the middle (where IFRS 16 charges closely resemble cash lease payments) or at the end (where IFRS lease charges are lower than cash lease payments made).

A company’s growth rate in the lease portfolio influences IFRS 16’s impact on earnings. For example, a retailer showing strong space growth will have more of its property lease portfolio in the early stages of the leases and will therefore incur a higher IFRS 16 total expense relative to cash operating lease charges. The opposite is true for a retailer that is in the process of shrinking its space. This can result in financials showing a growing business with declining earnings and a shrinking business with increasing earnings.

The lease term is an important driver for IFRS 16 liabilities. Companies with very long lease profiles will incur a larger IFRS 16 lease liability at inception. The divergence between IFRS 16 and cash lease payments will be larger and will have a greater negative impact on reported earnings, particularly early in the lease term. A company motivated to show strong near-term earnings growth may, therefore, enter into shorter-term leases, even when this may be commer­cially detrimental to the long-term prospects of the business.

Any impairment of the right-of-use asset will drive a lower right-of-use asset depreciation charge going forward. This would result in a higher level of reported operating earnings in future years than would otherwise have been reported.

Variable/turnover leases. Where a lease has a variable component that cannot be deter­mined in advance, the variable costs associ­ated with the lease are excluded from the IFRS 16 calculations and expensed directly to the income statement each year. Globally, retail rents are moving in varying degrees from fixed to variable rents (for example, turnover and footfall) due to the pressure that physical retail is experiencing from the move to online retail. An increasingly larger part of these leases will therefore be excluded from the IFRS 16 calcu­lation over time.

THE IMPACT ON FINANCIAL RATIOS

It is therefore clear that IFRS 16 income statement expenses can vary materially from the underlying cash lease payments and this has the potential to distort reported earnings relative to underlying cash flows. When it comes to presentation and disclosure in the financial statements, IFRS 16 introduces significant changes to financial ratios – an important consideration when reviewing the long-term performance of a business.

Figure 4 summarises some key ratios and how they would be impacted. It is instructive to note that while the cash flow statement disclosure requires the cash lease payments to be split between the interest component (disclosed under operating cash flows) and the capital portion (disclosed under financing cash flows), the underlying cash generated by the business remains unchanged. 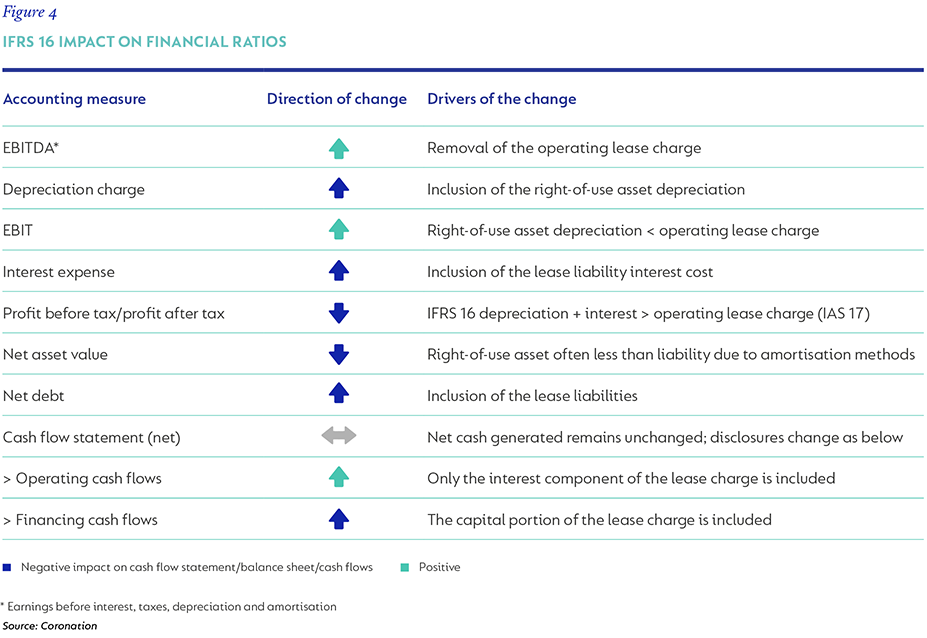 HOW DO WE, AS INVESTORS, RESPOND TO THIS COMPLEXITY?

IFRS 16 harmonises the accounting treatment of leases. It successfully brings on balance sheet those lease liabilities that otherwise would have clouded the comparability between companies in similar industries taking different decisions to either acquire or lease their assets, a situation most relevant for asset-heavy business models.

The Standard brings meaningful complexity and has the potential to materially distort the earnings base for some companies. We do not think that the market is making the necessary adjustments to IFRS 16 earnings to get back to cash rentals, a number that more correctly reflects the annual cost of the underlying leases (particularly in a higher inflation country). We make this adjustment for every company where the impact is material. At Coronation, we embrace complexities such as these as part of our culture of deep proprietary research to identify mispriced opportunities.+

Godwill Chahwahwa is an analyst and portfolio manager with 18 years of investment industry experience.