The dire state of crowded airports around the world and the stressful journeys of those who braved air travel were constantly in the news throughout the Northern summer. Airlines and airport operators blamed each other for their unpreparedness and the low staffing levels that caused the tumult, and one thing was clear: the consumer was ready to travel again, with a vengeance.

Fast forward to the present, and the mood on global travel demand has turned significantly more sombre. High oil prices – and even steeper increases in jet fuel – are being passed through to the consumer and is impacting the affordability of air tickets. The probability of a global recession seems to be growing by the day as central banks around the world are hiking interest rates to address inflationary pressures. The cost-of-living crisis in many economies is eating into consumers’ discretionary income and by extension, their propensity to travel. Chinese travellers, previously a significant segment of global air traffic, remain largely confined within their borders due to restrictive travel policies dictated by the principle of zero-Covid. Environmental considerations are increasingly important in consumers’ decisions on mode and length of transportation. The geopolitical environment remains cloudy, with no signs of the fighting abating in Ukraine, increased stress in Sino-US relations and various other points of tension. Moreover, the seasonality of travel patterns means that this slowdown, which we believe is short-term, is coinciding with the transition into the traditionally off-peak season for travel.

Air traffic recovery from the Covid troughs – once looking like it would beat all initial expectations and happen by early 2023 – has seemingly stalled (Figure 1). Global flight volumes reached levels close to 10% below their pre-Covid benchmark of 2019 in Q3 this year but have since started moving backwards. Even disregarding the vagaries of China’s travel policies, flight numbers have oscillated around these negative low-teens levels compared to 2019. 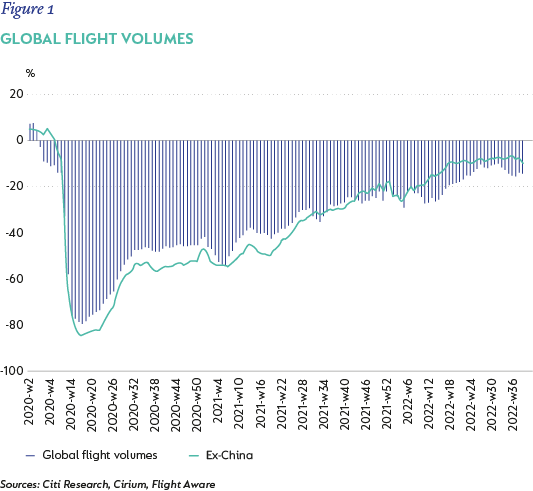 Against this backdrop, is it wise to invest in any aviation-related stocks?

We believe that for investors with a long-term horizon, selective opportunities are very attractive at present. There are reasons to be optimistic about certain businesses, despite the ambient doom and gloom.

ATTRACTIVE DYNAMICS IN THE VALUE CHAIN

When looking at the entire aviation value chain, there are areas with attractive dynamics. Original manufacturers of commercial aircraft are currently in the inverse position of what one might intuitively expect: they cannot deliver as many aircraft as the market desires.

Boeing’s woes with the 737 Max, which is still facing certification issues after having been grounded for 20 months due to two fatal crashes, and delayed deliveries of its widebodies have worsened the supply and demand imbalance. Airbus, our investment in the sector, has a competitive advantage in the key narrowbody segment, where its order book’s market share is approaching 60%. Narrowbody aircraft like the Airbus A320neo family (which generates around 75% of Airbus’s group EBIT) have been gaining share as a category even from before the pandemic. Airbus has further benefited from short-haul travel recovering faster than long-haul from their respective Covid lows, resulting in an order backlog of nine years.

In an effort to bring the backlog down from these unsustainable levels, Airbus is hiking narrowbody production from just more than 40 per month currently to 75 A320s per month in 2025. The ongoing challenge, however, lies in navigating the rest of the commercial aerospace supply chain, which is dealing with extreme demand fluctuations. While the market is, therefore, pricing in production of about 50 narrowbodies per month by 2025, we think they can achieve at least 70 per month. We expect this production milestone, in combination with a period of modest spending on research and development and frugal capital expenditure, to translate into strong earnings and free cash flow growth for the business and believe that the medium-term earnings visibility renders the shares very attractive, especially in light of its low-teens price-to-earnings valuation.

Just a step before Airbus in the supply chain, original manufacturers of aircraft engines are also more defensive businesses than the market gives them credit for. Some of our portfolios have investments in the French jet engine manufacturer Safran. The main driver of the investment case is continued fast growth in the high-margin engine aftermarket business, which currently contributes about two-thirds of profit. Additionally, it benefits from some of the same tailwinds as Airbus – long-term global travel growth despite the current slowdown in recovery, an increase in the use of narrowbody planes and a reversal of losses as their latest engine ramps up. Safran’s CFM56 engine powers 75% of narrowbody planes in service today. The programme has about 26,000 engines in flight, about five times the next largest engine programme. Its position on the fastest-growing airplane platforms should support above-market growth rates for many years.

When it comes to airlines, the situation is trickier. Long derided as poor investments – largely correctly – there is one airline sub-segment that can proclaim several examples of robust long-term growth and shareholder returns: low-cost carriers. In an industry where price is all too often the deciding factor in consumer decisions, being the cost leader allows these businesses to take share from legacy carriers over long periods and generate returns comfortably above their cost of capital over the cycle. Airline stocks are particularly sensitive to short-term market concerns, and during periods of investor angst they often offer disproportionately large buying opportunities for patient capital. Balance sheet defensiveness is important for the low-cost carriers to withstand these downturns, so stock selection needs to be particularly scrupulous. Our limited exposure to this industry across funds includes the Irish-listed Ryanair and Volaris, listed on both the Mexican Stock Exchange and the New York Stock Exchange.

Furthermore, it is worth considering whether travel patterns are changing, not just seasonally but perhaps even structurally. Airlines in Europe have ascertained that they have not seen a ‘cliff’ in bookings in the typically slow October and November months, despite an increasingly stretched consumer. On the other side of the Atlantic, Robert Isom, CEO of American Airlines, has noted that he is “very bullish about overall demand, even in an uncertain economic environment”[1]. This sentiment has been echoed by other large airline executives in recent company results calls. As Scott Kirby, CEO of United Airlines, has said, “this is not pent-up demand, it’s the new normal”[2].

The theory for the altered future of travel has been put forward most eloquently by Brian Chesky, the founder and CEO of Airbnb. His view is that in a world where hybrid work arrangements are becoming standard and many activities are moving online (such as ordering restaurant food at home, watching films on Netflix and getting groceries delivered) “living and travelling are going to blur together”[3]. Chesky has criticised the benchmarking of current levels of travel to 2019: “We’re not going back to 2019 any more than we’re going back to 1950.” And he has noted that there are “hundreds of millions of people that are glued to screens all day. They want to leave their house. Travel’s going to be the way to do that. And there’s not a lot of competition for travel, as far as things to do in the real world.” He believes that we are about to experience a golden age of travel. Not all this travel will happen by air, of course, but it should be a tailwind for aviation businesses.

Importantly, entry price is a key determinant of any investment’s return and as such, valuation is a critical pillar of our investment philosophy at Coronation. The market has reacted very negatively to the aforementioned negative external factors that are affecting aviation businesses. Structural long-term winners in their segments, such as Airbus and Ryanair, are now trading at a discount to their through-the-cycle multiples applied on arguably lower-than-normal earnings, thus offering a large margin of safety. Although risks need to be reassessed continuously and left-tail scenarios – particularly in geopolitics – cannot be dismissed, we believe that our portfolios are buying aerospace-related stocks at what will prove to be bargain prices in the fullness of time.