Paul Hanratty celebrates his first year at the helm of Sanlam with almost all the key numbers pointing in the right direction.

Operating profit is up 16%, new business volume 12% and, in spite of the high death claims during the pandemic, in the six months to June 2021, net inflows rose 13%.

Sanlam had the highest new business margin in the life industry at 2.8%, compared with 2.3% for Old Mutual, 1.5% for Momentum Metropolitan and a derisory 0.2% for Liberty.

Yet, as Coronation’s life analyst Tracy Brodziak points out, Sanlam has been more affected by Covid-related mortality than its peers. It’s had R22bn of death claims since the beginning of the pandemic and R10bn in the six months to June 2021 alone.

Luckily, Sanlam was carrying a pandemic reserve originally set up for HIV/Aids claims. This means, after provisions, that the R1.4bn in excess claims was far easier to swallow. And it was able to release R1.25bn for its pandemic reserves and some other capital it has tucked away to help pay for claims.

Hanratty says Sanlam has limited debt, and Sanlam Life has raised R2bn in subordinated loans to provide the company with flexibility. Some of this will go towards the newly acquired group risk and retail life insurance business it bought from Alexander Forbes.

Brodziak says she is impressed at the way Sanlam has grown its premium income. Mass market new recurring premiums jumped 49% to R1.65bn, mainly thanks to a 47% increase in sales at the Capitec funeral policy joint venture. In spite of the tight economy, recurring premiums in the retail affluent market, where the bulk of Sanlam’s life policies are held, grew 5% to just under R1bn. But the biggest drivers of growth were the direct-to-consumer businesses MiWay Life and Indie, which grew premiums 37% on 2020 and 145% on 2019.

The corporate (employee benefits) business had a strong increase in new business, but took most of the pain from death claims, and experienced R3.5bn in net outflows.

Still, Brodziak says Sanlam can reprice its corporate business annually and, like the rest of the industry, is likely to hike risk benefit premiums substantially.

Laurium Capital head of financials Matthew Pouncett says he sees relatively good value in the life sector, especially compared with local bank share prices, which have rebounded since November 2020. Pouncett argues that Sanlam, as the best life office, isn’t expensive even though it is now trading 30% above its 12-month low. At the current price of R61, it is almost on par with its embedded value — its tangible net worth plus the value of its life book. But embedded value takes no account of future profit.

Pouncett says that other than mortality risk, his main concern is that the potential in the rest of Africa and the Indian business still has to be realised. Morocco-based Saham, which Sanlam now controls, accounts for the bulk of the R8.9bn in short-term insurance premiums the group earns in North and West Africa, but its underwriting margin of 2.7% is less than half of Santam’s. 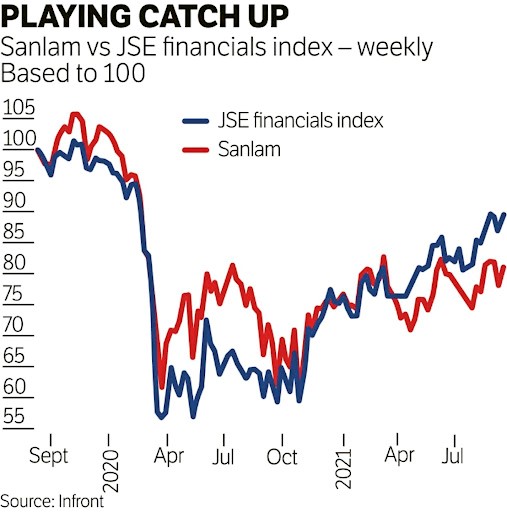 "But at least Hanratty is committed to trimming back in some of the smaller African markets which can never achieve scale," he says.

The only significant lending businesses in the group are the two Shriram operations in India (one focused on the transport sector, the other on consumers).

Pouncett says that too much of the Indian life and general insurance sales are tied to the Shriram operations, and that Sanlam "needs to distribute more aggressively through third parties, especially through India’s massive banking sector". While profits grew, they are still 10% below 2019 levels.

Pouncett says Hanratty made the right decision to exit the UK. "Like Standard Bank, Sanlam now sees its best opportunities in Africa." Sanlam has already sold the Nucleus investment platform for R1.5bn and is in the process of selling its UK life, pensions and wealth management businesses.

"But we will keep an institutional asset management business," says Hanratty, "to ensure we can offer a competitive global investment capability to our clients." Its international suite of products, with R168m in profit, was a larger contributor to Sanlam Investments than its domestic Sanlam Investment Management (SIM) business, which brought in R120m, a negligible return for one of the 10 largest fund managers in SA. 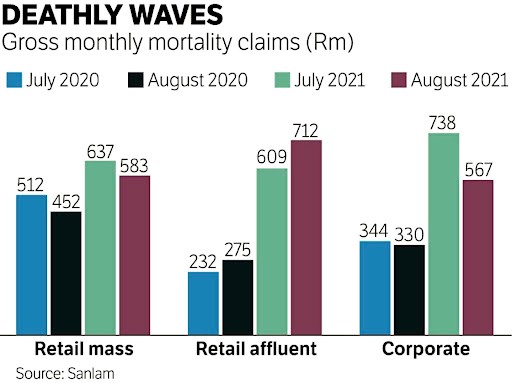 Hanratty hopes this will improve now that SIM is a BEE manager, with Patrice Motsepe’s African Rainbow Capital as an anchor shareholder.

Hansjee says his main concern is that the vaccination programme will not roll out fast enough for the life companies to see a reversal in mortality claims — especially as there is some resistance to being vaccinated.

But Brodziak says Sanlam is a long way from needing to take on significant debt, much less resort to a rights issue. Most fund managers still remain buyers of the share at this price.