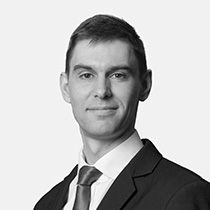 Steven Barber is an analyst with 12 years of investment industry experience.

THE US HEALTHCARE system is somewhat dysfunctional. Despite the boldness of the claim, this view is not that controversial. Humana, one of the largest US health insurers, suggested at its recent investor day that “the health system is costly, complex, and poorly positioned to meet customer needs”.

The US spends a far higher percentage of GDP on healthcare than other developed nations, yet generates worse outcomes*. At Coronation, as investors with opportunities to invest globally, it would be easy to dismiss US healthcare as simply unsustainable and look for ideas elsewhere. However, by embracing this complexity and endeavouring to understand it, we have generated attractive returns for our clients.

Coronation’s global equity portfolios have held Anthem and UnitedHealth, the two largest US health insurers by enrolment, since 2017 and 2019, respectively. Both have contributed favourably to the portfolios’ returns.

Both Anthem and UnitedHealth have generated strong financial results and demonstrated resilient business models that have weathered different economic cycles and political regimes. The businesses have grown revenues consistently in a range between 7.5% to 10.5% p.a. over the last three, five and 10 years. Figures 1 and 2 show historical earnings growth together with our forecasts**. We expect earnings-per-share (EPS) growth of 13% to 14% for both companies over the next five years. 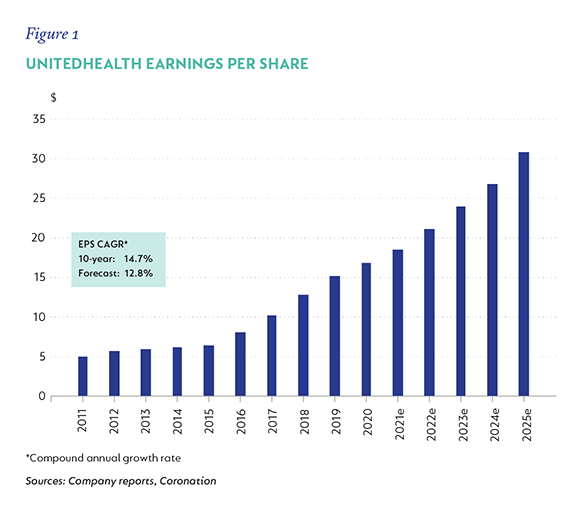 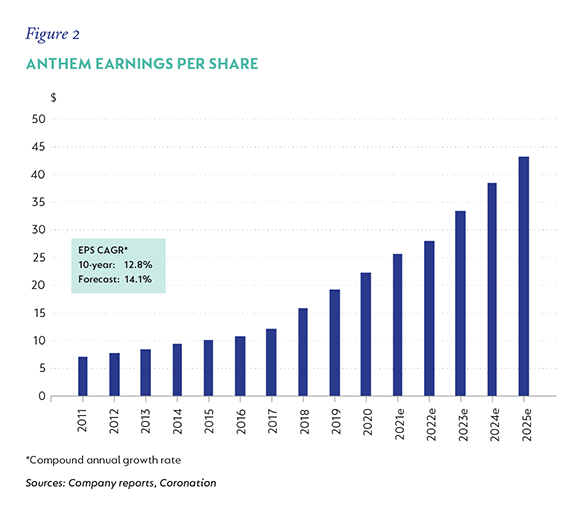 Anthem has its roots in two mutual insurance companies founded in Indianapolis in the 1940s to provide health insurance under the Blue Shield and Blue Cross trademarks. The resultant Blue Cross Blue Shield (BCBS) mutual company ulti­mately merged with or acquired 13 other single-state BCBS plans in the 1990s and early 2000s.

In 2001, the resultant entity demutualised and listed on the New York Stock Exchange. With its cultural roots as an agglomeration of former mutuals, Anthem was, in our view, undermanaged for a long time. At one point, the company operated up to 30 separate medical claims systems, which is just one tangible example of this chronic undermanage­ment. Under the leadership of CEO Gail Boudreaux since late 2017, the company has refocused its strategy and improved execution.

The new management team has driven strong results and we believe that there are still further benefits to come from improved execution of the new strategy. To continue the example, the company currently operates on three claims processing systems, with plans to reduce this to the end state of two by next year***.

PART OF THE SOLUTION RATHER THAN PART OF THE PROBLEM: A SHIFT TO VALUE

The US healthcare market is undergoing a seismic shift from paying for individual care encounters under fee-for-service arrangements, to one in which healthcare providers are increasingly incentivised to take broader ownership of patient outcomes and bear increasing levels of risk for medical costs under value-based care (VBC) payment models. Initially, VBC can involve bundled payments for an episode of care (e.g. a hospital admission for a hip replacement), or up- and downside risk-sharing in cost savings or overruns on medical expenses versus a predetermined baseline.

The ultimate endpoint of VBC is full capitation, in which healthcare providers receive a fixed fee per member every month from the health insurers and are accountable for all of a member’s healthcare expenses, regardless of how much or how little they utilise the healthcare system.

While there are periodic calls from liberal quarters for the US to shift to a single-payer healthcare system, the shift to VBC is akin to a market-based solution to the problems of high costs and frag­mented, episodic care. A provider operating under full capitation has a very different set of incentives than one who is billing per unit of care.

While the shift to value is reactive to the current dysfunction and will take decades to play out, we believe that the health insurers have a key role to play in this transition by facilitating and moti­vating providers to adopt new payment models that encourage them to take a more holistic view of the care they offer. Change will not come quickly, but change is indeed afoot.

THE VALUE OF GOOD RELATIONSHIPS

UnitedHealth in particular, with its Optum Care business, is well positioned to not only facili­tate, but also profit from this shift. Optum Care, which has been building a footprint of physician**** practices in the US for over a decade, now employs or is affiliated to 56 000 physicians in the US, serving 20 million patients in total. A patient’s relationship with their primary care doctor is one of the most important in healthcare and, under more intensive value-based treatment regimes*****, allows for early intervention and greater practice of preventative medicine.

Today, only four million of Optum Care’s 20 million patients are cared for under some form of risk-bearing value-based arrangement, and only two million under full capitation. Growing value-based relationships has been partly responsible for a doubling in the revenue per consumer served over the last four years for the broader OptumHealth business, of which Optum Care is a part, with a further 32% increase in the first quarter of 2021.

There is a decade of strong growth ahead for Optum Care, as consumers are increasingly treated under value-based arrangements, delivering better outcomes for patients and strong growth and prof­itability for UnitedHealth from the increased scope that VBC enables.

The recent flurry of listings of value-based health-care companies like Oak Street Health has shone a spotlight on the value inherent in UnitedHealth’s Optum Care business. Despite the re-rating in UnitedHealth stock, we expect Optum Care to contribute towards strong ongoing growth in both revenues and earnings, and solid returns for our clients over our investment horizon.

Covid-19 resulted in significant deferral of medical care throughout 2020, as patients avoided unnecessary visits to hospitals and other medical settings. This initially resulted in a significant windfall for the health insurers who continued to collect monthly premiums but were faced with significantly lower medical expenses.

Collectively, the health insurers did the right thing and returned significant value to commer­cial clients and the government, while hospitals and other medical providers came under significant financial pressure because of lower levels of medical utilisation. For companies that touch tens of millions of lives and all of the US healthcare system, it was good corporate citizenship to do the right thing.

Trading on approximately 14 times forward earnings expectations (which is a substantial discount to the market), we find that Anthem offers attractive value. UnitedHealth, on 20 times forward earnings expectations, trades broadly in line with the market. Despite UnitedHealth’s higher rating, we still expect the stock to deliver strong compounding returns in the years ahead, driven by continued strong earnings growth. Both stocks remain core holdings in our global equity portfolios.+

* As measured by life expectancy or other measures of chronic disease burden.
** Revenue growth includes acquisitions for both companies and the benefit of an accounting change for Anthem. EPS in recent years was flattered by the benefits of lower tax rates as a result of US tax reform. We don’t expect this benefit to repeat; in fact, it is more likely that tax rates will increase over our investment time horizon.
*** One for the government programmes business and the other for commer­cial/employer-focused business, which typically run on separate systems.
**** The terms ‘physician’ and ‘doctor’ are used interchangeably. The US practice is to refer to doctors as physicians.
***** The doctor is incentivised to see a patient more frequently and spend more time with them, especially sicker patients, as the doctor is at risk for the costs of treating that patient.

Steven Barber is an analyst with 12 years of investment industry experience.