Marie joined Coronation in 2014 as an economist in the Fixed Interest investment unit. She has 20 years' experience as a market economist. Prior to joining Coronation, Marie worked for UBS AG, First South Securities, and Credit Suisse First Boston.

LAST YEAR WAS one in which South Africa celebrated a change in political leadership and, at least initially, had high hopes of a social and economic recovery. These were short lived and a combination of consecutive growth-related disappointments, revelations of deeper and more intractable political (and private) malfeasance and the slow pace of change we ended 2018 a little more bruised, possibly more realistic and certainly more downcast than we were at the outset.

Many forecasters – including ourselves – started 2018 believing that GDP growth approaching 2% was relatively easy to achieve. Within a supportive global environment, a great improvement in consumer confidence, reinforced by low inflation and low but positive real disposable income growth provided a decent support for consumer spending acceleration, despite the increased tax burden. A small amount of replacement capex and at the margin some rebuilding of commercial and industrial inventories from historically low levels all added up nicely.

However, little came to pass. With a steady deceleration in compensation (wage) growth, a significant increase in the fiscal burden on consumers (tax bracket changes, a rising fuel levy, the VAT increase and rising utility levies) and not enough confidence to increase credit utilisation, consumer spending has remained weak. State capex retreat pulled overall gross fixed capital formation down. On the supply side, the deep contraction in agriculture was exacerbated by a series of derailments, refinery outages and strikes that affected mining, manufacturing and transport output. South Africa slid into recession in the first half of 2018 and while there was a nascent recovery in the third quarter (Q3) of the year, it is now unlikely to deliver even half the growth that was forecast at the beginning of 2018. 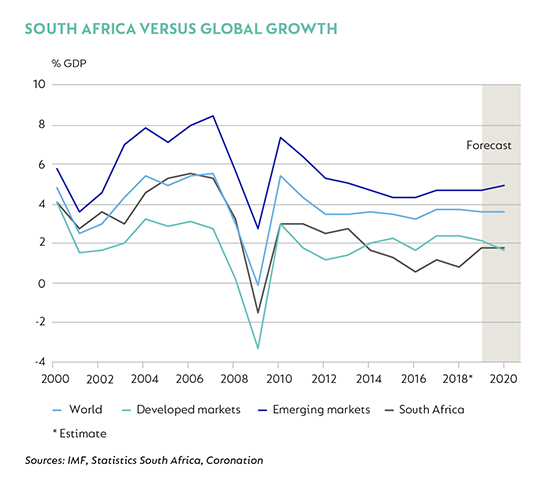 Through the course of these events, there has been a general deterioration in sentiment. Despite the meaningful and important political changes made in key economic institutions and ministries, the fact is that incomes remain under pressure and the political situation, although vastly improved from a year ago, has not yielded much visible economic benefit. The reality is also that ordinary South Africans simply have not felt that things are getting any better.

At the end of a hard year during which bad news seems to have come in waves, each more depressing than the next, the recent news about the full extent of Eskom’s financial and operational failure feels like the proverbial last straw.

So, it is hard to see how growth will pick up materially in 2019, and recent data continue to pose downside rather than upside risk to existing forecasts. There are certainly lots of reasons to think that growth momentum will remain under pressure. Household spending accounts for 60% of GDP and compensation growth slowed to 5.4% year on year (y/y) in Q3 2018. This is the lowest nominal growth since the 2008/2009 Global Financial Crisis (GFC). In real terms it is only just positive, and little better than the low point of -0.8% y/y in the second quarter of 2009. Additionally, gross fixed capital formation was 1.4% y/y in Q3 2018 – positive at least, but still historically weak. Private sector job creation is stagnant, while both consumer and business confidence retreated in Q3. 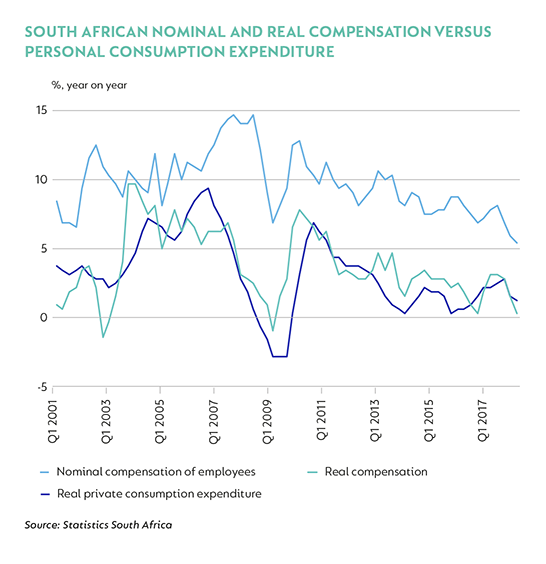 But there are areas where pressure has eased, and momentum seems to be improving.

Stability in compensation growth, which has been slowing steadily, should help improve momentum in disposable income. In December, retail fuel prices were cut heavily, and the rate of increase in monthly outlays should slow steadily. Inflation is set to remain relatively benign and we do not expect the same degree of fiscal pressure to be repeated in 2019/2020. We would again make an argument for some growth in replacement capex and inventory recuperation – now off even lower levels than last year – but uncertainty remains.

At the margin, some small boost from capital committed during the President’s Investment Summit will also help. The falling oil price – if sustained – implies an improvement in terms of trade and a more positive contribution to growth from net exports. On the supply side, both mining and manufacturing output improved towards year-end. Our long-held forecast is for growth to accelerate to 1.8% in 2019.

Eskom is now the biggest and most immediate domestic threat to growth and a positive political outcome. From a growth perspective, meaningfully higher electricity tariffs will raise inflation and undermine household disposable income growth. Supply disruptions undermine not only business confidence but also inhibit the ability of companies to produce output.

The fiscal risk posed by Eskom is meaningful. Not only has Eskom asked for significant tariff increases of 15% per annum over the next three years, but the latest results also contained a request for
R100 billion in debt to be transferred to the state balance sheet. This amount represents about 2% of GDP and would – under this proposal – increase South Africa’s government debt stock by as much. Government is already in a fiscally constrained position, with the October Medium-Term Budget Policy Statement detailing yet another deterioration in the government’s debt profile over the next five years and the expectation that annual fiscal deficits are likely to be larger than previously budgeted for. Gross debt is expected to continue to climb to a peak of 59.6% of GDP in 2023/2024 and moderate very slowly thereafter. The request potentially creates a dangerous precedent and the fallout might be enough to change South Africa’s last remaining investment grade credit rating.

The good news is that inflation is unlikely to also become a big headwind for the consumer. Relatively low food inflation provides a good anchor for overall inflation, but a sharp decline in retail fuel prices – and base effects – help contain two large and potentially volatile influences of headline inflation. The weak economy has also seen a steady moderation in service prices and limited much of the pass-through from a volatile and weaker currency.

Administered prices, including Eskom, remain a large inflationary influence on headline inflation and arguably still represent a tax on consumption. We forecast average CPI at 4.6% in 2018, with a modest acceleration to 5.3% in 2019. In this environment, we think there is limited scope for a steady interest rate hiking cycle, and anticipate moderate and slow rate increases by the central bank in 2019. Both our inflation and interest rate forecasts carry downside risk at this point.

CAN WE AVOID THE GLOBAL HEADWINDS? MAYBE, MAYBE NOT.

That we experienced a very weak progression in domestic growth during a period in which the global economy experienced the most joined-up recovery in a decade – albeit now slowing and becoming much less even – raises understandable concerns that any local recovery in a weaker global context is unlikely. Certainly, slowing global trade volumes and weaker growth in key export partners are a clear headwind.

What is possible is a cyclical recovery driven by domestic demand. This requires the alignment of some recovery in domestic growth drivers outlined above and the rehabilitation of a range of supply-side one-offs, including various outages, strike action and Eskom’s load shedding. Because the economy has not grown, there are also few visible excesses – household balance sheets are in reasonably good shape, credit growth has been low and households have deleveraged. Employment has been poor and capex visibly weak and confidence is low. The current account deficit is relatively small. If the economy has not managed to grow, at least there are fewer parts which are exposed to a potentially sudden stop.

WHAT WE NEED IS TIME

While this is hardly an uplifting picture, it is a hopeful one. What now stands in the way is time. Linked to the clear frustration with an economy seemingly stuck in low gear has been a growing expectation that the necessary and painful reform needed to unlock better growth – much of which faces some opposition from the ANC-led alliance partners – will become manifest after the May 2019 election.

However, we are more hopeful that the marginal changes to policy already announced will gain velocity and that the quality of the conversation between the public and private sectors will continue to improve than we are of the election delivering a political payload that would significantly impact economic policy.

But what we do not have is a lot of time. Growth has been low for so long that it is at risk of stalling. Low growth limits options: it reduces revenue and undermines the State’s ability to more productively allocate capital, it limits employment opportunities and makes earning a wage capable of raising living standards impossible, and it discourages investment.

And those factors are just what we need. The swift delivery on some of the promises made, including the release of spectrum* and an accelerated and urgent review of visa regulations might only go a small way to boosting growth at first; but they could go a long way to bolstering confidence that there is more to these commitments than just words, and addressing some of the practical constraints to key growth areas. We also need an intervention which prevents Eskom from totally derailing these emerging green shoots, and we need it soon.

*Making additional radio frequencies available will boost wireless network capacity. This will bring down the costs of communication and increase internet access, which is essential to economic growth and innovation, ensuring that SA keeps pace with the 4th industrial revolution.