“Sorrow is better than fear. Fear is a journey, a terrible journey, but sorrow is at least an arrival. When the storm threatens, a man is afraid for his house. But when the house is destroyed, there is something to do.” – Alan Paton, author and activist

THIS EDITION OF Corospondent provides you with consolidated and comprehensive information on the Covid-19 pandemic, its economic and financial markets impact, and our portfolio management actions during the initial crisis period in February and March.

All our lives have changed dramatically, and, in some ways, perhaps permanently, over the past two months. We are in the midst of an epoch-defining moment, challenging all of us with the dual quandary of limiting the loss of life to a novel disease while managing the extreme economic fallout caused by the containment measures – the only currently viable response we have to the virus. While these challenges are requiring sacrifices from everyone, our thoughts are with those on the dual frontlines: the healthcare, food production, retail and logistics workers who are keeping us going through the lockdown; and also the business owners, employees, informal traders and their families who are most affected by the economic hardship caused by the revenue and job losses that are the result of the lockdown.

It is now clear that we are facing the biggest economic disaster since the Great Depression of the 1930s. Unemployment claims in the US have spiked by nearly 22 million (c.14% of the workforce) over the four weeks to 16 April, roughly equal to all the new jobs created since the Global Financial Crisis (GFC) a decade ago. While we do not have equivalent data for South Africa yet, the impact of the local lockdown on employment is likely to be, at best, similar. In Table 5 overleaf, Google’s mobility data show a 75% decline in local retail and recreational visits since the lockdown began, significantly higher than the global average of 61% and the US’s 45%. 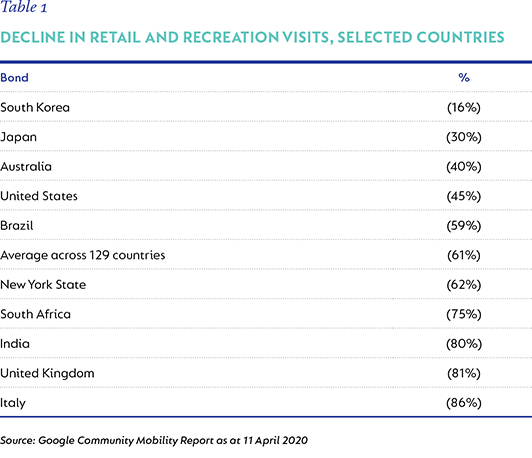 Although government announced a R40 billion temporary employee relief scheme via the UIF, administrative bottlenecks mean that many vulnerable workers in sectors such as construction and hospitality may not receive a paycheque at the end of this month. In addition, there are more than 1.5 million informal businesses in South Africa that are not covered by this safety net, most of which either cannot trade or are severely restricted. The stark reality is that up to half of our population may be faced with food insecurity in the coming weeks and months, unless there is a dramatic step-up in relief efforts. Government initially announced economic support of around 1% of GDP to date, a fraction of the aid packages introduced in most of the developed world. Despite a precarious national balance sheet and significant fiscal constraints, a comprehensive R500 billion aid package, partly funded by loans from the World Bank and the IMF, was announced as we were finalising this issue of Corospondent. This package includes a R200 billion loan guarantee scheme for medi­um-sized businesses, R100 billion to support jobs, R50 billion in additional social grants, and R20 billion in additional healthcare expenditure. The challenge now is in execution – efficiently getting the money to where it is needed, by when it is needed.

Coronation contributed R5 million to the Solidarity Fund at launch. In our view this is one of the most effective and high-impact channels for those busi­nesses and individuals with the ability to contribute to South Africa’s efforts to deal with the pandemic. Last week, our team responded to the President’s announcement that Cabinet will take a 33% pay cut for three months. A total of 90 employees (repre­senting close to 30% of Coronation’s head count) and our non-executive directors elected to donate a portion of their salaries over the next three months. Our senior leadership team are all contributing 33% of our salaries. It may be just a few drops in a very large bucket, but every little bit helps.

THIS TIME IS DIFFERENT ...

Carmen Reinhart is the co-author of the seminal work on financial crises, which put the GFC in perspective through a detailed review of historical financial mishaps in 66 countries over a period of 800 years. The authors’ key conclusion at the time was that, while the challenges of the day may feel unique in the moment, they share a lot of common­ality with what has gone before. Recently, Reinhart published an article concluding that this time is truly different, stating that she can find no historical parallel that can serve as a guide in the current crisis. While this is partly due to the unknown duration of the economic hard stop required to combat Covid-19, the bigger differentiator is the policy response. In the 1918-1919 influenza pandemic around 50 million people died worldwide, but no formal lockdowns were introduced. She reports that the US economy grew by 9% in 1918, bolstered by the World War I production effort. This is also a much more synchronised recession than experienced in 2008/2009, when emerging markets were largely protected from the fallout as a result of China’s then-strong economic growth. Counterbalancing this is that the fiscal and monetary responses to the current crisis are also completely unprecedented. Support packages already announced in developed countries often exceed 10% of GDP and quantita­tive easing programmes are at several multiples of the post-GFC level. Central banks around the world are firmly in ‘whatever it takes’ mode.

... BUT THE INVESTOR PLAYBOOK REMAINS LARGELY THE SAME

Our focus in this edition is to try and contextualise what all of this means for investors. The key take-out for us is that a disciplined commitment to long-term valuation-based investing remains the correct response. Getting this process right is what we focus on every day. For our clients, the core message, as always in tough times, is to remain committed to a well-diversified portfolio that is appropriately balanced between growth and income as well as domestic and offshore assets. How to get this allo­cation right depends on your personal ability to take risk and the time horizon that you have. If it is at all possible in a time of hardship to remain committed to your original plans, we think you will be well served over time.

One key observation that is worth highlighting is that return prospects for retirees that are correctly posi­tioned have improved markedly. Over the past four years, there was a big rotation out of conservative balanced funds such as Capital Plus and Balanced Defensive, in favour of lower risk options, including a move to cash. This was an understandable reaction to disappointing returns produced by local equities and listed property, with cash outperforming the conservative balanced funds over the past five years. However, the probability that the conserva­tive balanced funds will produce better performance over the next several years has increased markedly. In South Africa, yields on cash and shorter-dated bonds have declined significantly after a 2.25% cut in the policy rate and are now only in line with inflation, while equity valuations worldwide are now much more attractive and longer-dated local government bonds also still provide attractive real yields. Retirees with both income and growth needs can therefore expect very different future outcomes compared to what they currently see when perusing statements and historical performance tables.

We know this is a trying moment for most of our clients. We also have to prepare ourselves for an extended period of disruption while we wait for a comprehensive medical response to dealing with the pandemic. We are as focused as we have always been on managing your capital to the best of our ability and to provide you with the client service that you expect of us. In this moment, it is worth reminding ourselves of Franklin Delano Roosevelt’s words when he squared up to fight the Great Depression: The only thing we have to fear is fear itself.

The element of surprise is common in a system where so many decisions depend on forecasts of the future.” – Iconoclastic economist Frank Knight, mid-20th century

“The fact that some choice is good doesn’t necessarily mean that more choice is better.” – Barry Schwartz in The Paradox of Choice: Why More is Less