THE FIRST QUARTER of 2022 (Q1-22) saw a significant increase in financial market volatility. Global inflation expectations for this year have more than doubled from a year ago (5.1% currently from 2.1% previously), while expectations for growth have moderated (4% current from 4.6% previously). US monetary policy is now expected to move into restrictive territory, with the Federal Reserve Board (the Fed) funds rate anticipated to end 2022 at 3.1% and the Fed expected to hike in increments of 0.5% (previously 0.25%) for at least the next two meetings of this year. Russia’s invasion of Ukraine has materially increased risks and has fanned concerns about global stagflation on the back of the resultant surging oil and other commodity prices. The hangover from Covid-19 and its many variants had already rendered economic outcomes relatively uncertain, and the current geopolitical environment has only served to further muddy the outlook and perplex investors.

South Africa (SA) has emerged relatively attractive when compared to its emerging market peers. In Q1-22, the rand has appreciated more than 9% against the US dollar (only outdone by the Brazilian real), ending the quarter at R14.61/$1. The boost to the terms of trade (higher export prices relative to import prices) on the back of higher commodity prices has been the primary driver of the rand’s outperformance. SA government bonds (SAGBs) returned 1.86% over the quarter, ahead of cash and inflation-linked bonds (ILBs) that returned 0.93% and 0.31%, respectively. Over the last 12 months, SAGBs have returned an impressive 12.37%, well ahead of cash (3.64%) and ILBs (10.76%). This outperformance has been driven by a flattening of the yield curve, that saw bonds with a maturity of 12 years returning 17.77% over the last year. The combination of rand appreciation and bond returns has made SAGBs the best performer in the global bond universe, well ahead of global bond indices, which have been dragged into negative territory due to the sell off in US bond yields.

SAGB investors are still faced with assets that trade at historically and comparatively high yields, suggesting a significant embedded risk premium. However, considering recent global gyrations, a reassessment of the risks and repercussions thereof is warranted. Locally, fiscal and inflation risks must be reevaluated considering recent commodity price moves, while from a global perspective the impact of stressed US bond yields needs to be factored into current valuations.

SA’s inflation was expected to average 5.5% in 2022 and 4.6% in 2023 prior to this upward move in commodity prices. Things have changed significantly since the start of the year, with white maize and oil prices higher by 12% and 42%, respectively. A large part of the SA inflation basket comprises food and fuel related items. Despite the poor demand backdrop in SA, the longer these prices stay high, the stickier inflation becomes at higher levels and the more likely it becomes that this elevates other prices in the basket (second round inflation effects). Inflation is now expected to average over 6% for 2022 (peaking above 6.5%) before coming down to an average above 5% in 2023 - higher than expectations prior to the conflict. The risks continue to be tilted to the upside and surveyed expectations for longer term inflation are now at 5.5% (up from 4.8%). Therefore, it is highly likely that the SARB will accelerate the path to reaching a nominal repo rate of between 6% and 6.5% in the first quarter of 2023. This would help to anchor inflation expectations at a lower level and keep pace with the expected path of global monetary policy normalisation. 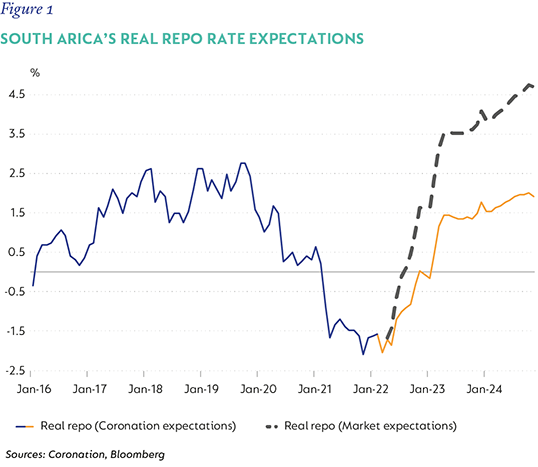 The positive side of higher commodity prices, specifically higher metal prices, is that the price of SA’s exported products increases relative to its imported prices. This means that SA receives more money for the same volume of exports and, of course, if volumes increase, then there is a significant multiplier effect. Tax revenue is likely to increase as company earnings increase and SA’s current account remains in surplus, reducing its reliance on portfolio flows. Fiscally this translates into a lower deficit, due to higher tax revenue and should imply a lower borrowing requirement. The precedent set in the March budget, saw 55% of the windfall revenue used to reduce the borrowing requirement while the other 45% was spent on funding free tertiary education, along with higher municipal and healthcare wages (Figure 2). Unfortunately, these do not have a significant growth dividend and are very hard to recoup. However, at current prices, government can expect another R100 billion in tax revenue next year, which will hopefully be spent on reducing the known risks in the economy which include the Eskom debt overhang, ailing municipal and state-owned-enterprise finances, and a permanent solution to the basic income grant debate. Thankfully, SA’s starting position is better than it has been for some time and the debt-to-GDP ratio is expected to peak at 75% in five years. This is by no means an insignificant debt load, but, relative to peers, it is no longer outrageous.  This reduces the probability of SA entering a debt trap over a five- to 10-year horizon. 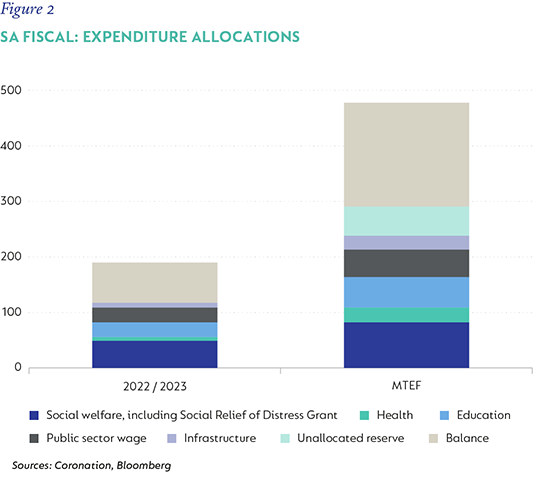 VALUE SHIFTS TO THE 10-YEAR AREA OF THE CURVE

With the prospect of a debt trap no longer a significant medium-term issue, it is worth looking at the breakeven rates between cash and SAGB bases on our new expectations for the repo. On average, breakeven to cash has come down by 25 basis points (bps) but remains historically high (Figure 3). 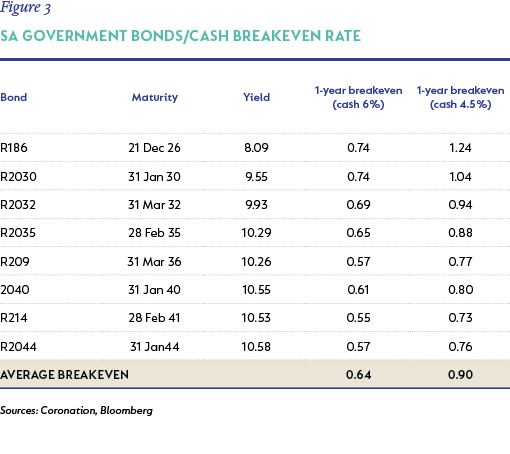 In addition, the value shifts more towards the 10-year area of the curve. This shift in value is reflective of the recent risk premium compression that has occurred between the 10- and 20-year areas of the yield curve (curve flattening), which is now at historical norms (Figure 4). SAGB’s, therefore, still embed a significant risk premium, both in terms of inflation expectations and relative to cash, with compelling value now being the 10-year area of the yield curve. 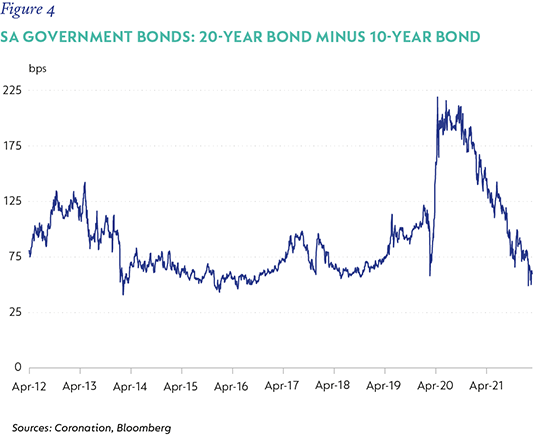 The recent rise in US bond yields has raised concerns of an imminent sell off in emerging market bond yields, similar to the taper tantrum of 2013. First, it is important to point out that although the emerging market debt levels has escalated, in developed markets, more specifically the US, the increase has been sharper. The weighted average maturity of US debt is just over five years, which means the cost of funding this debt is closely connected to what happens with short-term rates. This argues for the real funding rate of US debt to remain relatively low compared to history, and for the cost of debt funding to remain below real growth. Over the decade preceding the Covid-19 crisis, the average real US 10-year yield versus realised inflation (represented by US Personal Consumption Expenditure Index) has averaged 0.77% (Figure 5). This implies the real rate is likely to be between 0% and 0.5% going forward, which puts the long-term fair yield for the US 10-year to be between 2.5% to 3.5% (assuming a long-term US inflation outcome of 2.5% to 3%). However, in the short term, we expect to see volatility in the US 10-year bond as inflation prints higher. 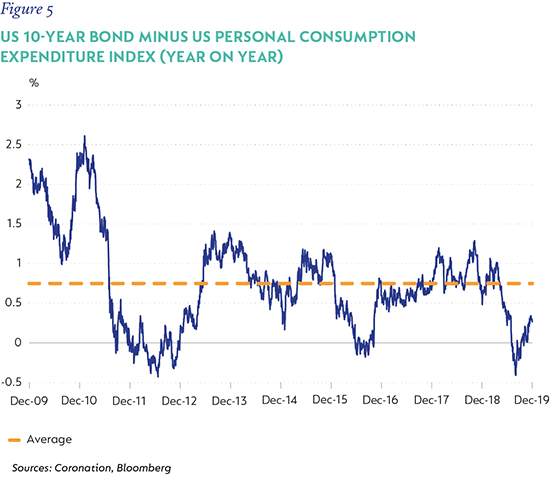 Currently, SAGB yields are more than 700bps above US yields (Figure 6). This suggests a significant risk cushion to absorb a move in the US 10-year yield to levels that would be deemed fair with longer term expectations. 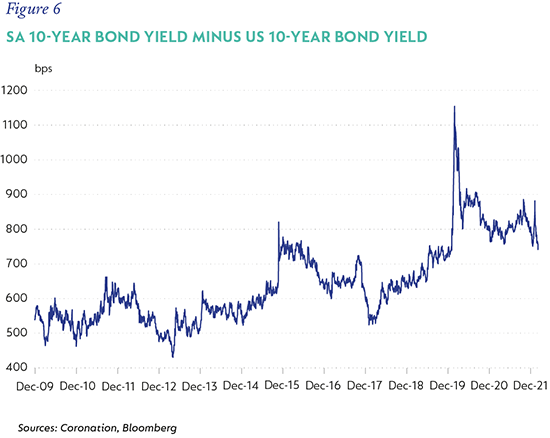 Geopolitical tensions have increased the risk of higher global inflation and a faster normalisation of global monetary policy. SA has benefited from a significant boost to terms of trade that provides more breathing room for the fiscus, but that will place pressure on the SARB to normalise rates at a similar pace to global central banks. SAGBs still trade at historically high yields and are elevated compared to their emerging markets counterparts. The current market pricing of interest rate normalisation in SA also suggests that the embedded inflation premium in bond yields remains excessive and that yields have a significant risk buffer to absorb higher local inflation and higher US bond yields. We continue to advocate long duration positions that are focussed in the 10-year area of the yield curve.