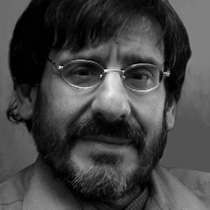 Steven Friedman is a political scientist and guest author.

Steven Friedman is a political scientist and guest author.