IN THE FIRST 19 years of the 21st century, the world has faced catastrophic events in the form of terrorist attacks (9/11), hurricanes (Katrina) and earthquakes (in Haiti and Japan) that tested the very fabric of humanity. However, the last two decades have also given us a new medium to connect with one another (social media), devices to allow us to communicate more efficiently (smartphones) and the first black leader of the free world (Barack Obama). Economic fluctuations, distortions and crises have tested the resolve and agility of policymakers to keep the wheels of the global economy moving. This initial part of the 21st century provided the ideal training ground for 2020. Covid-19 provided the undertones of a terrestrial disaster that manifested in an economic crisis. It did, however, spur the fastest developed vaccine in human history, but the economic scarring will be felt for years to come.

SA ENTERED PANDEMIC CRISIS ON THE BACK FOOT

Covid-19 literally brought the world to a standstill, but as we move into 2021, vaccine in hand, there is a ray of hope that life might finally start to return to normal. South Africa, unfortunately, was ill equipped to handle such a pandemic. Years of corruption and mismanagement left the State severely incapacitated as it tried to navigate its way through the crisis. The country now faces the difficult task of trying to accelerate growth to 3%-4%, without additional spending, given its precarious debt position. Despite the South African Reserve Bank (SARB) reducing the cost of capital to the lowest in the country’s democratic history, the government’s cost of funding remains elevated, as bond yields reflect investor disbelief in the administration’s commitment and ability to right the ship. The local bond market delivered a return of 8.65% over the course of 2020, well in excess of cash at 4.80%. The yield curve steepened aggressively, with the 10-year bond trading in excess of 200 basis points (bps) above the five-year bond and almost 600bps above cash rates. As such, the three- to seven-year area of the yield curve provided the best return at 16.26%, and the longer end of the curve (>12 years) provided the poorest return of 4.59%. Inflation-linked bonds (ILBs) delivered poorer absolute returns of 4.22%, but provided a similar pattern of return across the ILB yield curve (front end outperforming longer end).

The globe and South Africa remain firmly in the grips of the second wave of infections. As the numbers turn into names and the names turn into people we know, the harsh reality of Covid-19 has dawned on us as we enter 2021. Even more stark are the difficult tasks and choices that lie ahead of the country. South Africa remains on the precipice of a debt trap.

There are only two ways to escape – either increase growth so that tax revenue rises sufficiently to compensate for increased spending, or decrease spending to balance the equation. All this needs to be done while keeping borrowing costs low enough to ensure that debt financing doesn’t consume all available expenditure and that no extraordinary support is needed by any State-owned or guaranteed entity. Inflation is expected to remain relatively well contained over the next two to three years, averaging around 4.5% over the period. This means that one needs to see real growth of 3%-4% in order to generate nominal growth of c.8%, which is needed to stabilise the nation’s debt profile.

Government has made progress towards reigniting local growth by attempting to revive business confidence and infrastructure development. However, this will only bear fruit over the medium to longer term. This means that expenditure will have to be reallocated and contained until growth starts to pick up. Progress is being made in this regard with the high court ruling in favour of the 2020 public sector wage freeze and government attempting to keep wages frozen for the next three years. The health of State-owned companies and municipalities remains a concern, especially now with Covid-19 placing even further pressure on these vulnerable entities. Thus, the risk of fiscal slippage is high, rendering the fundamental economic backdrop unsettled.

Coronation’s investment philosophy is founded on pricing appropriately for underlying risk and ensuring that the valuation of assets that we place within portfolios sufficiently compensates for underlying fundamentals. In previous publications, we have continually flagged the inherent cheapness of South African government bonds (SAGBs). But as we enter 2021 – and given the strong performance of risk markets in the fourth quarter of 2020 following the vaccine news and the successful campaign of Joe Biden to win the US election – it is worth reassessing this cheapness. We measure the attractiveness of SAGBs through 1) their attractiveness relative to cash and implied real yield; 2) their risk premium relative to developed market rates; and 3) their comparative attractiveness to other emerging markets.
The best way to measure SAGBs’ attractiveness relative to cash is by looking at their breakeven relative to cash; that is, how much can bond yields sell off before their total return equals that of cash and how that looks relative to history. In addition, the implied real yield on offer provides one with an indication of the return one can expect from SAGBs after the effects of inflation. In both cases, we can see in figures 1 and 2 that the 10-year benchmark SAGB, although not at its cheapest level, still encapsulates a significant yield premium relative to history. 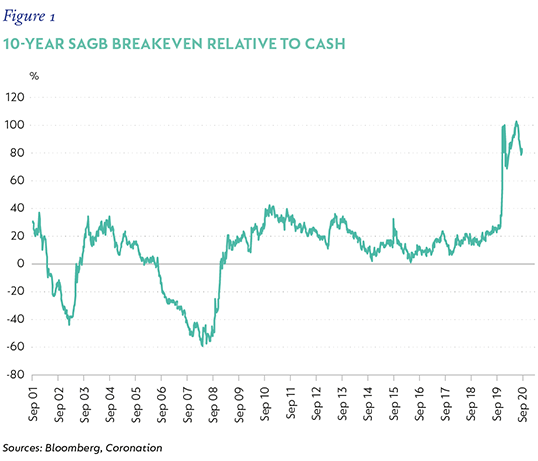 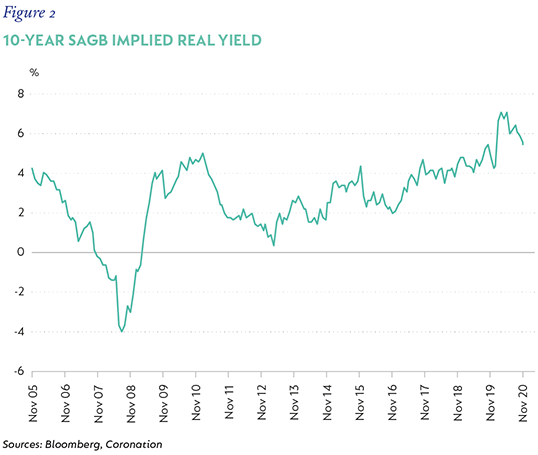 Currently South African debt issued in offshore markets trades at levels of 4.2% in US dollars for 10 years, which implies a credit spread of 320bps. Expected local inflation over the next decade is 4.5% (economist estimates) and for the US is 2% (Treasury Inflation-Protected Security market expectations), implying an inflation differential of 2.5%. If we assume that movement in currencies over the long term compensates for inflation differences, then this implies local currency South African debt should trade at 7.7% (4.2% + 2.5%). However, current South African 10-year SAGB yields are trading at 8.7%, suggesting that the implied credit spread in local currency debt is significantly higher. In addition, they trade 800bps above developed 10-year rates, further emphasising the significant size of the risk premium (Figure 3). 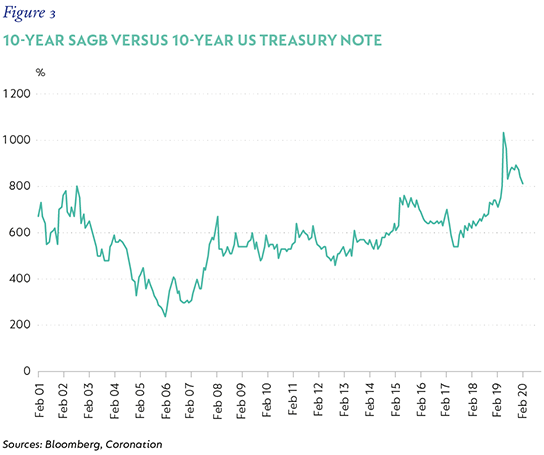 Emerging markets were hard hit during the Covid-19 crisis, but still contain significant valuation buffers in their local bond markets. Among them, South Africa stands out as relatively cheap, from an outright nominal yield, implied real yield and curve steepness perspective (figures 4 and 5). There are a few countries among the peer group that have fiscal dynamics that are deteriorating to the same extent as South Africa’s, but doubt as to the country’s ability to claw its way back from the abyss remains the highest, as indicated in the current trading yields. 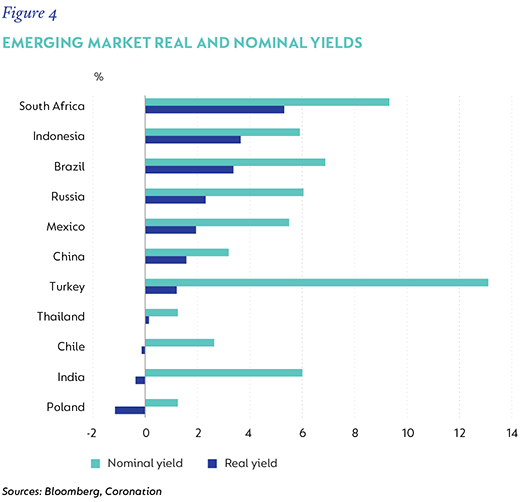 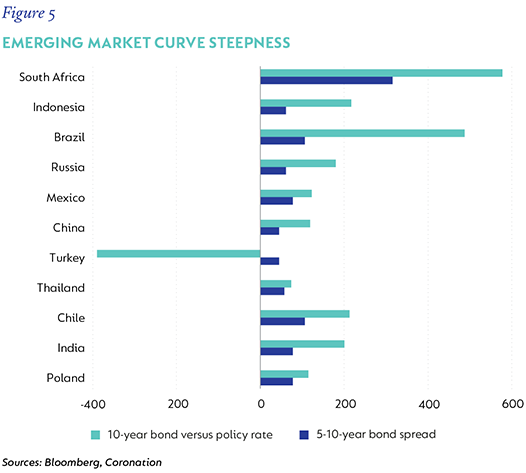 Bringing these valuation metrics together, they still suggest a significant risk premium in place within SAGBs, despite the rally we have seen. This risk premium still provides an offset to the fundamental risks and earns SAGBs a deserved place in portfolios.

Inflation linkers have underperformed nominal bonds for some time now; however, not all ILBs have underperformed nominal bonds. Shorter-dated ILBs have outperformed nominal bonds, with the bonds in the three- to seven-year area generating a return in excess of 10%. This has been a result of high real yields and attractive rolldown to zero real policy rates. We continue to view real yields in the shorter end of the curve as quite attractive, given that real yields remain quite high; the inherent inflation protection in these instruments in the event that inflation does start to surprise to the upside; and their attractive total return prospects relative to nominal bonds. As an example, the I2025 bond trades at a real yield of 2.73%, which implies a total return range of 5.69% (if inflation is at 3%) to 7.61% (if inflation is at 5%) over the next year.

This is attractive relative to both cash rates and the equivalent nominal bonds. We still view this as an attractive opportunity set for bond portfolios. 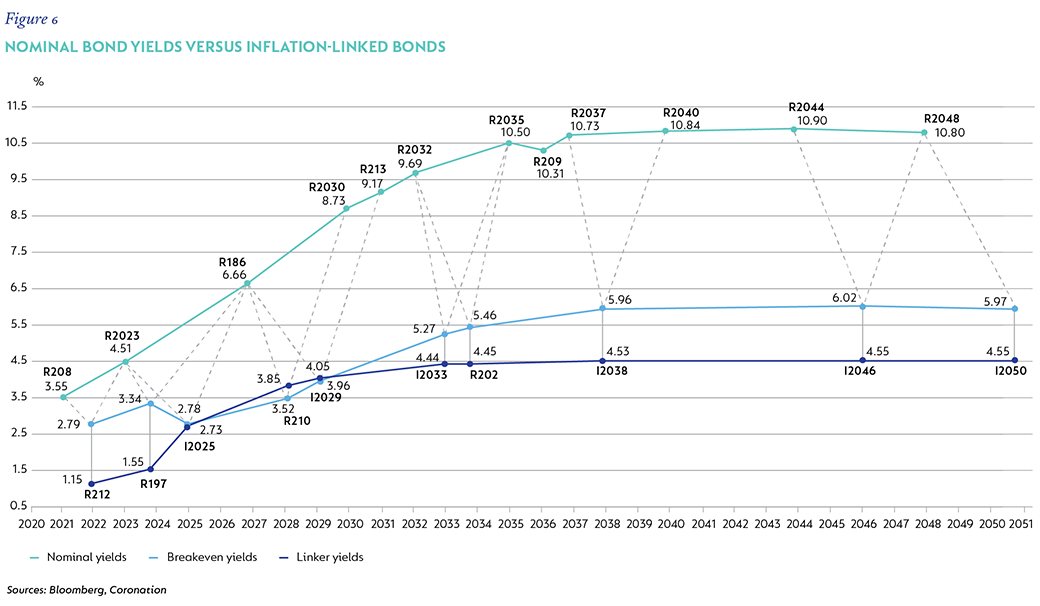 Underlying economic conditions are easing but remain challenging given South Africa’s poor starting point. Inflation will remain under control, but a stronger shift needs to be made towards higher growth without pushing the country further into a debt trap. Progress has been made by reallocating expenditure away from a bloated wage bill towards pro-growth elements; however, further unpalatable austerity might be required if reforms are not accelerated. SAGBs, despite their rally at the end of 2020, still encapsulate a significant risk premium that provides a decent offset to the underlying fundamental backdrop. Shorter-dated ILBs, with their elevated real yields and inherent inflation protection, also provide an attractive allocation opportunity for bond portfolios.+