The numbers that drive retirement

To mathematicians, the numbers 5, 15 and 75 may have no fascinating correlation or geometric relationship. They are not the Golden Ratio, nor did they help to solve Fermat’s Last Theorem. But to retirement specialists, they provide the starting point for calculating how much you really need in your retirement.

The '5’ relates to the generally accepted ‘safe’ percentage South African retirees can draw down from their retirement capital on an annual basis to receive a sustainable, inflation-adjusted retirement income for life. The ‘15’ refers to the percentage of salary that is recommended that you should save for retirement each month. It is also the number by which your annual current income is multiplied to give the required amount of capital needed at retirement. Lastly, ‘75’ is the percentage of your salary which should be received in retirement to maintain your standard of living.

5: HOW MUCH YOU CAN WITHDRAW FROM RETIREMENT SAVINGS

No one really knew how much you needed for retirement until 1994 when American financial planner, William Bengen, crunched the numbers and came up with 4% as the ‘safe withdrawal rate’. That meant, by US standards, you could withdraw 4% from your retirement portfolio every year without seeing a decline in living standards late in retirement. Bengen investigated the highest withdrawal amount that – as a percentage of retirement-date assets and with inflation adjustments – would be sustainable for the full 30 years estimated for retirement. He based his findings on returns gathered from historical data using the Standard & Poor's (S&P) 500 Index and intermediate-term government bonds, and constructing 30-year rolling periods. He then focused on what was called ‘SAFEMAX’, which was the highest withdrawal rate for the worst-case retirement scenario in the historical period. It was from these origins that the world of financial planning received the 4% rule.

But even the 5% withdrawal rate should be used mainly as a guideline. Bengen acknowledged in his study that volatility in asset returns during retirement would cause the safe withdrawal rate to fall. So it is advisable to be somewhat flexible. This is especially relevant for recent retirees, given how disappointing returns have been in the recent past. Older retirees have shorter time horizons and can therefore justify higher withdrawal rates. In South Africa, the current legal drawdown limits applicable to living annuities fall between 2.5% and 17.5%, but unless assets exceed needs by a large amount, the higher side of the spectrum is not advisable. There are many ways to manage withdrawal rates to compensate for risks which may be encountered over the retirement period (refer to the information box later in this article).

Much like the safe withdrawal rate for retirees, there is also a ‘safe savings rate’, expressed as a percentage of the income earned while still working. Much research has been done on this aspect of retirement too, with US academic Wade Pfau coming up with the term ‘SAFEMIN’. Pfau believes that you will be better prepared if you start your working life thinking in terms of a safe savings rate than waiting for retirement to set a safe withdrawal rate, but even that is not fail-safe. Eventual outcomes will vary based on assumptions about asset allocation, market returns, lifestyle needs and the expected duration of the accumulation (while working) and decumulation (while retired) phases. The overwhelming fact which stands out is the importance of starting to save early. In South Africa it is generally accepted that 15% of a monthly income should be saved for retirement, though that will increase the later you start saving. Currently, up to 27.5% of your annual taxable income can be saved tax free.

75: THE PERCENTAGE OF YOUR ANNUAL SALARY YOU NEED WHEN YOU RETIRE

The replacement ratio (the percentage of your final salary required at retirement) is generally considered to be around 75% in South Africa. This ratio is based on the actuarially calculated amount that defined benefit pension funds paid out when they were still applicable to most people’s pension funds. Unless you are a government employee, you are much more likely to be invested in a defined contribution pension fund today, where the retiree needs to take responsibility for having adequate retirement capital to fund their future income needs. The rationale for replacing only 75% of your final salary is that retirees will need less than 100% of their annual salary in retirement. As a start, you will no longer be saving 15% of your salary for retirement. Other costs may reduce too, such as those for debt servicing, transport, children’s education and housing. Generally, the highest cost for a retiree, particularly in the latter years of retirement, is predictably medical costs, making continued membership of a good medical aid very important.

THE AMOUNT YOU WILL NEED AT RETIREMENT: 15X

Based on a withdrawal rate of 5% and the replacement ratio of 75% of annual salary, the amount that is required at retirement is 15 times your final annual salary.

The numbers in action 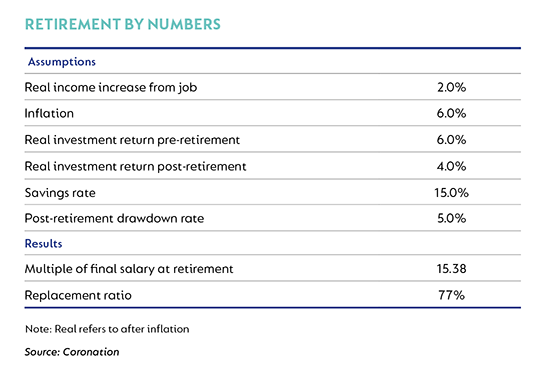 However, if the numbers were fail-safe and the process was risk-free, retirement would not be the complicated process which it has become. Like an obstacle course, numerous hazards lie in your way.

Sequence of returns: being in the right place at the wrong time

Even if retirees do all the right things, they may still fall victim to retiring at the wrong time. The sequence of returns is a risk that affects retirees, depending on the order in which returns on their retirement investment occur. If a higher proportion of negative returns takes place at the beginning of retirement, it will have a lasting negative effect and reduce the amount of income you can withdraw over your lifetime. To avoid crystallising big losses, you need a portfolio that limits large losses.

Most people in their early sixties can expect to live another 20 to 30 years. But of course, no-one can predict when they will die. It is therefore considered prudent to plan for a longer lifespan of at least 30 years. Even this is not always fail-safe, particularly as people are living longer. Japan, for example, revealed in 2017 that it has 67 824 citizens who are older than 100 years, resulting in an ageing population that is putting severe strain on the country’s economy. You can manage this risk through insurance though, by using some of your capital to buy a guaranteed income for life.

If the rate of inflation exceeds returns, capital, and therefore retirement income, will be eroded, so the aim of all retirement funding portfolios should be to achieve real returns of at least 3% to 4% over time. Growth assets such as equities and property provide the best protection against inflation over time; moderate growth exposure is therefore an essential element in the fight against inflation.

Most people in South Africa do not plan sufficiently for retirement and leave saving for it too late. However, the numbers, 5, 15 and 75 may provide some guidance on how to plan as efficiently as possible and not be caught unawares. It is always advisable to know how much is enough.

HOW TO MAKE YOUR MONEY LAST LONGER

* Reduce income requirements after periods of low returns on your retirement capital.

Is it possible to manage these risks in retirement?

Not all income funds are made equal

Understanding risk profiles and having realistic return expectations are key.