“Give me accountability, I’ll give you peace.” – Abhijit Naskar, neuroscientist and author

EVERY QUARTER WE put a lot of effort into producing Corospondent. Its most important purpose is to account to you, as the owners of the capital that you’ve tasked us with deploying on your behalf. It also documents recent events, our interpretation of these events and how they influence the decisions we make in constructing appropriate portfolios for our investors’ diverse needs. If you want to revisit the quality of our current thinking a decade from now, the record is there for review.

When the editorial process for this quarter’s edition started in earnest during June, things were looking up. The global economy is booming as lockdowns continue to ease, especially in developed markets, despite nagging concerns about Delta and other SARS-CoV-2 variants. South Africa enjoyed its best terms of trade since the 1980s, fuelled by a commodities boom. The pace of the vaccination rollout continued to increase, with all adults over 35 years of age now able to get their jabs.

As we show on the cover, progress was made on the economic policy front, with unexpected accommodative deregulation of independent power generation, the laying of the groundwork for greater efficiency in the management of our ports and some decisive steps in the fight against corruption. The positive momentum can be summarised by our quarter-end forecast for domestic economic growth in 2021 of 4.9%, as Marie Antelme reports here.

Unfortunately, the storm clouds rolled in a few weeks later. Anarchy erupted in KwaZulu-Natal and parts of Gauteng, in what appears to have been an organised insurrection. The looting and mayhem were only brought under control by concerted action taken by local communities who rejected the actions of a few, and were eventually aided by the belated deployment of the defence force.

In the short term, markets have interpreted this as a one-off event that will quickly be brought (and kept) under control. Figure 1 shows selected market movements from 13 July (the worst day of looting) and at the time of writing on 19 July. Whether you look at the exchange rate, the equity market or the share prices of the retailers directly impacted by the events, it’s clear that global risk appetite played a much larger role in setting market prices than local events did, however harrowing they were to live through. 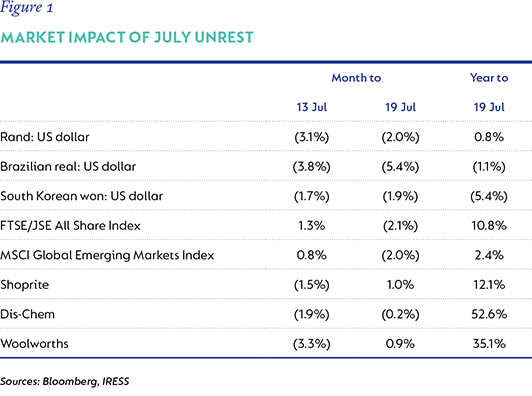 The long-term implications of these events are still unclear. It certainly dented confidence in government’s ability to protect vital infrastructure and other assets, but it may also act as a catalyst for bolder economic reforms and more assertive action against the corrupt. The more government gets out of the way of its citizens and their businesses, the higher economic growth is likely to be. Higher growth is certainly what is needed to avoid the doors slamming shut on a more sustainable and prosperous future for all.

To all the investors who participated in the recent ballot to convert the Coronation Optimum Growth Fund to a feeder fund into its new offshore sibling, the Coronation Global Optimum Growth Fund – thanks for the overwhelming support. The investor participation stage of the ballot has now successfully concluded, and the conversion process will be finalised during September, as previously communicated.

Other than the change in the Fund’s structure and name, all other aspects of its operation, including its investment strategy, the portfolio management team and its typical underlying holdings will remain unchanged.

We caution clients to be careful in responding to unsolicited invitations to invest with Coronation and other reputable investment companies. Scams spread via WhatsApp, Facebook and other social media channels are on the increase, with multiple fraudsters misrepresenting themselves as acting in the name of Coronation. We will never ask you to complete the investment process by depositing money into bank accounts shared via social media channels. Always remember that offers that sound too good to be true are most likely a scam. If in doubt about the veracity of an approach to you, reach out to our client service team via 0800-22-11-77 or clientservice@coronation.com.

I am also happy to announce that we successfully implemented a new digital verification system during July. This will simplify the new account opening process, as we will, in most cases, not require proof of address or a copy of a bank statement for ‘know-your-client’ purposes as a result.

ALSO IN THIS EDITION

Responsible stewardship and a sustainable investment approach are increasingly important to many investors. Neville Chester warns that this is a complex topic where a naive, overly simplified approach can have unintended consequences. Nicholas Hops writes about why, for the first time in many years, we are invested in locally listed gold miners, despite the gold price increasing by 50% over the last two years. We also include a synopsis of our research into US health insurers, Anthem and UnitedHealth, in Steven Barber’s article.

Finally, this issue includes a summary of the quarterly fund commentaries on our flagship funds, for your ease of reference.

As always, I invite you to let us know how we can improve if any aspect of our service to you is not to your satisfaction.

“The fact that some choice is good doesn’t necessarily mean that more choice is better.” – Barry Schwartz in The Paradox of Choice: Why More is Less

A good quarter for investors, but a tough one for South Africa

“Throughout human history, in any great endeavour requiring the common effort of many nations and men and women everywhere, we have learned – it is only through seriousness of purpose and persistence that we ultimately carry the day. We might liken it to riding a bicycle. You stay upright and move forward so long as you keep up the momentum.” – Ban Ki-moon