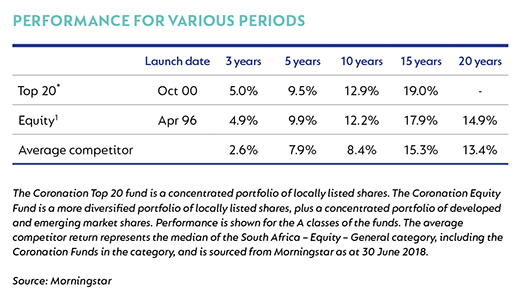 The FTSE/JSE Capped All Share Index returned 2.9% for the second quarter with a strong contribution from the resources sector (+20%). The industrial sector with its large rand hedge counters also rose during the period, ending up 4%. The domestic-heavy financials sector ended the quarter down 6.0%. The pressure on domestic stocks came about as the exuberance which had been priced into most domestic shares following the ANC’s December elective conference was not supported by near-term results. We used this opportunity to add to better-quality domestic shares that are no longer priced for an optimistic outcome.

In the Equity fund, a large weighting in global equities has boosted fund performance in the recent past. During the quarter, we added to Vivendi, which owns Universal Music Group (the largest of the three big global music labels). The fund continues to hold large positions in several of the JSE-listed offshore stocks.

The post-elective conference rally in domestic stocks provided an opportunity to take profits in certain domestic stocks and add to names including Naspers, British American Tobacco and Anheuser-Busch InBev (AB InBev). We also took the opportunity to add to our positions in the hospital stocks (Netcare and Life Healthcare) as well as food producers and retailers. We still have limited exposure to economically sensitive domestic companies because valuations do not yet offer a sufficient margin of safety, in our view.

The strong performance in resource stocks has been driven by robust pricing across most commodities. Anglo American and Northam Platinum remain our largest holdings, while Mondi and Sasol (a beneficiary of strong oil prices) were reduced on the back of strong performance. 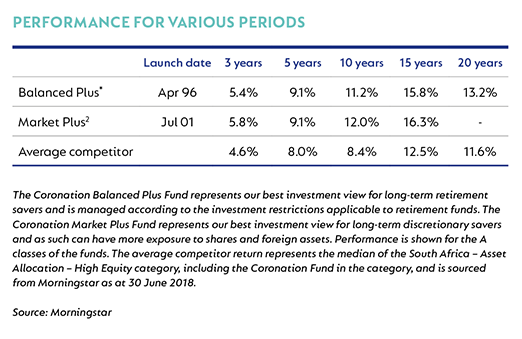 Both Balanced Plus and Market Plus performed well against their peer groups over all meaningful longer time periods. Recent performance was aided by limited exposure to fixed rate bonds, while our emerging market exposure detracted, as risk aversion saw the MSCI Emerging Markets Index declining by 8.0% for the period (+8.2% over a rolling 12 months). The funds reduced their weighting in global equities in the first half of the year, as valuations have become increasingly stretched and risks increasingly elevated (as a result of trade wars, economic populism and geopolitics).

As mentioned above, domestic stocks came under pressure following first-quarter euphoria post the ANC elective conference. We used this opportunity to take some profits in certain domestic stocks and added to others. The fund continues to hold large positions in several JSE-listed offshore stocks.

With the weakening of the rand and the sell-off in the bond market, precipitated by a flood of foreign-based selling, we once again see value in the local bond market. We have taken advantage of the sell-off to buy bonds, reducing our underweight position.

Global bond yields increased in response to the US hiking rates and an increasing aversion to risk. This vindicated the fund’s low weight in fixed rate bonds (both offshore and locally). Foreign selling of South African government bonds drove sharply rising domestic yields (and negative returns, with the All Bond Index down 3.8% in the quarter). This offered an opportunity to build a position in government bonds at attractive levels. Although valuations reached attractive levels in the domestic market, this was not the case in global markets. In our view, yields are simply too low to justify the risk that comes with rising levels of indebtedness and an increasingly reckless disregard for fiscal discipline from many of the world’s leading economies.

The property market declined 2% in the quarter. We continue to avoid most of the counters within the Resilient stable and find more value in the A property sector as well as blue-chip domestic names such as Growthpoint, Redefine and Investec Property Fund.

In the Market Plus fund, the strength of the dollar added to the fund’s returns given our overweight position. We have used this period of dollar strength to reduce this overweight position in favour of high-yielding government bonds from some emerging markets, including South Africa. We have also reduced the global equity position as developed equity markets have remained resilient in the face of what can be a very detrimental trade war. 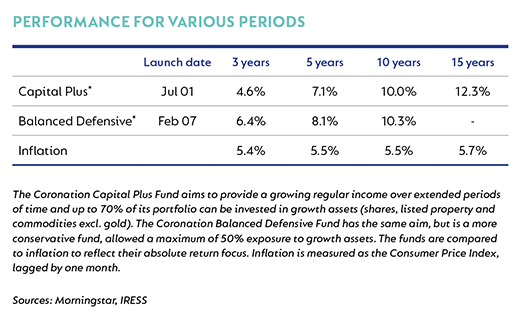 Our absolute return portfolios have the dual mandate of beating inflation over time and protecting capital in the short term. The wild gyrations in the market during the quarter gave us the opportunity to make some meaningful changes to the composition of the funds. The rise in yields of government bonds to levels between 9% and 10%, depending on their duration, is particularly attractive to funds such as these. We added aggressively to our South African bond holdings and sold units in the Global Capital Plus Fund to enable us to do this. We also reduced the funds’ cash holding to facilitate the bond buying.

Within the domestic equity portion of the funds, we trimmed our position in Mondi as this high-quality company’s share now offers limited upside following its stellar performance. We added to Standard Bank, Naspers and Bidcorp, and acquired newly listed share Quilter ahead of its unbundling from Old Mutual.

Over the short term, the negative attitude to emerging markets may well persist for a while.  However, the high real yields available in the bond market as well as the derating of many domestic shares to attractive levels make us more optimistic of reaching our inflation-linked mandates.

Fixed rate negotiable certificates of deposit (NCDs) continue to hold appeal due to the inherent protection offered by their yields and relative to our expectations for the repo rate (flat, with a bias for a 25 basis points [bps] reduction). However, credit spreads remain in expensive territory (less than 100 bps in the three-year area and 130 bps in the five-year area). The fund continues to hold decent exposure to these instruments (less floating than fixed), but we will remain cautious and selective when increasing exposure. NCDs have the added benefit of being liquid, thus aligning the liquidity of the fund with the needs of its investors.

The fund maintains a healthy exposure to offshore assets, and when valuations are stretched, it will hedge/unhedge portions back into rands/dollars by selling/buying JSE-traded currency futures (US dollar, UK pound and euro). These instruments are used to adjust the fund’s exposure synthetically, allowing it to maintain its core holdings in offshore assets.

At current levels, the yields on offer in the local bond market are attractive relative to their underlying fundamentals and warrant a neutral to overweight allocation. The fund has been using the recent widening in bond yields to increase its allocation to fixed rate government bonds and hence its modified duration (capital at risk due to bond yield movements).

The fund maintains holdings in property counters that offer strong distribution and income growth, with upside to their net asset value. In the event of a moderation in listed property valuations (which may be triggered by further risk asset or bond market weakness), we will look to increase the fund’s exposure to this sector at more attractive levels.

It also maintains select exposure to certain high-quality corporate preference shares, but will not actively look to increase its holdings.

We remain vigilant of risks emanating from the dislocations between stretched valuations and the underlying fundamentals of the South African economy. However, we believe that the fund’s current positioning correctly reflects appropriate levels of caution. We continue to invest only in assets and instruments that we believe have the correct risk and term premium to limit investor downside and enhance yield.